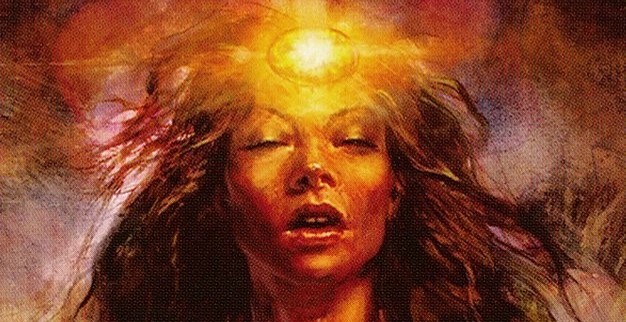 I've Got You On M-eye Mind

This week, we'll be tackling an oldie but a goodie: Mind's Eye.

A former staple of the format, Mind's Eye seems like a great pulse check to see where the Commander format is at. Included in many a deck due to it being colorless, it acts (or acted?) as a means of incidental card draw for any deck with extra mana laying around, or any deck going for the long game. Head on over to the EDHREC page for Mind's Eye, and you'll notice right off the bat that it sees heavy play in decks that traditionally can struggle with card advantage: colorless decks, mono-white decks, and mono-red decks.

But where's it at today? Let's take a look!

Let's start by outlining what we're looking at:

As is tradition, we'll be focusing on rank rather than the number of decks (i.e., decklists), as it helps account for fluctuations in decklists scraped in any given timeframe, and helps us compare it to other colorless cards. Remember that the lower the rank (closer to one), the more popular a card is!

As an additional note: it turns out that colorless cards are a bit wonky to scrape, as non-basic lands are often included in the rank of all colorless cards. If you head on over to Top Colorless Cards, you'll notice they are categorized by top cards, creatures, artifacts, lands, etc., but for ranking purposes of all colorless cards, lands get thrown into the mix, including lands.

Since that's the case, I'll present the data here both including and excluding lands side-by-side. I think it's worthwhile to see overall where Mind's Eye fits, but it's probably more informative to focus the adjusted rank score of Mind's Eye compared to other artifacts, colorless instants, sorceries, etc., since most people probably won't be swapping Mind's Eye for a land.

The colorless-specific rank score (graph one), and adjusted rank score (graph two) for Mind's Eye can be seen below. The gray line is a localized regression simply to give an overall impression of the general trend, and the light shading corresponds to the standard error.

The graphs are essentially the same, with the adjusted rank score graph simply removing lands, and giving a more realistic impression of where Mind's Eye sits alongside other nonland colorless cards.

Generally, Mind's Eye seems to be pretty steady until around Spring 2020, where it begins a noticeable decline. Since March 2020, Mind's Eye has seen an increase of 65% in rank score, and thus, a hefty decrease in popularity compared to other nonland colorless cards.

Finally, we can look at the number and percentage of times Mind's Eye fell within a particular category from the months scraped above, making sure we don't double count any previous categories (i.e., not counting top 100 again in the top 150).

The adjusted rank score (lands removed) for Mind's Eye over the last two years (May 2019 - May 2021) can be categorized as follows:

If the trend continues, Mind's Eye may well surpass the 150 rank threshold, and perhaps even the 200 threshold. As of now, if you head on over to the Top Colorless Cards, you won't even find it on the page.

Now that we've seen the data, it's Time to Reflect!

The price history for Mind's Eye could well be a factor, as it has seen relatively few printings in original Mirrodin (2003) and Battlebond (2018), in addition to two relatively more exclusive printings in Commander's Arsenal (2012) and a Kaladesh Masterpiece treatment (2016). It held steady in the $5+ dollar range for years, until the reprint in Battlebond where it significantly declined. Over the last year, it's been back on the rise, surpassing $10.

The Cost of Card Advantage

You'll still find some content creators advocating for its consideration, especially in colorless decks, which makes a great deal of sense, considering colorless decks really want all the draw they can muster. But others argue that it just doesn't quite make the cut anymore.

Generally, paying 5 mana to then have the option to pay more mana to keep up with your opponents' draws isn't something people are prioritizing nowadays, especially as games get faster. The strength of Mind's Eye lies in its potential over multiple turns, as 6 total mana (5 to cast, 1 to pay) for your first card isn't a good rate unless you're aiming for a game with a hefty turn count.

If you're in blue, chances are you'll just play a Rhystic Study, Mystic Remora, or even Psychic Possession. If you're in black or green, you have other forms of card draw, whether it's trading cards for life, in the case of black (e.g., Night's Whisper), or tethering it to creatures in the form of green (e.g., Beast Whisperer). Red and white traditionally struggle(d?) with card draw, but red has been invigorated of late with impulsive card advantage, and Boros decks have seen an influx of card advantage galvanized to Equipment (e.g., Akiri, Fearless Voyager) or even through recursion with the introduction of Lorehold (e.g., Osgir, the Reconstructor). Which leaves white (and colorless) that still have some catching up to do. Cards like Esper Sentinel are certainly promising, though.

Aside from your standard-but-often-pricey traditional colorless draw options (e.g., Sensei's Divining Top, Scroll Rack), there's been an influx of great colorless cards recently that help with card draw, like Endless Atlas, Mystic Forge, Tome of Legends, and Idol of Oblivion, to name only a few.

In fact, we can compare Mind's Eye along some of the recent options we've been given, like Mystic Forge, Endless Atlas, and Tome of Legends. Feel free to click right or left to see individual plots, and at the end, there's a faceted plot with all the graphs side by side! I included Staff of Nin here because it too was a card of yore that seemed to be jammed in every deck that needed card draw, and, similar to Mind's Eye, it seems people just don't want to spend six mana to start drawing cards next turn.

This list is by no means exhaustive, but I hope illustrates that maybe there's just more options for card draw/advantage stapled to artifacts nowadays. I, for one, am excited to see where Tome of Legends, Endless Atlas, or even Idol of Oblivion end up in a few years' time, as they seem to be trending up and up.

There's even a slough of viable options now on lands, including War Room, Bonders' Enclave, or Arch of Orazca, which also help round out draws in decks that may struggle to keep a full grip.

Despite the trend downwards, I still think Mind's Eye warrants plenty of consideration... just not in the decks that we traditionally see associated with it. Sure, throw it in your colorless deck or mono-white deck. Bonus points if you have an Unwinding Clock with mana rocks or Victory Chimes to be able to pay the trigger.

Where I think Mind's Eye shines best is in specific 'big mana' decks. Decks like Karametra, God of Harvests, Sasaya, Orochi Ascendant, or decks that otherwise use Seedborn Muse and Wilderness Reclamation effects can really take advantage of Mind's Eye, since they often have plenty of mana, and Mind's Eye can help convert that mana into card draw.

Kruphix, God of Horizons also seems like a good option. Sure, you have plenty of draw options in these colors, but only 48 decks (3%) including Mind's Eye still seems a tad low, since you're likely able to cast it for free, pay its cost for free, and it otherwise synergizes with many things you're already doing. Even Selvala, Explorer Returned seems a neat option, and only 7% of decks are running it!

The problem, of course, is that those decks tend to have either other options, or, you know, use that mana to just sink into a Finale of Devastation to win the game rather than draw more cards.

As for this week, I'm listing Mind's Eye as a Lost Legacy. It may not have experienced as steep a decline as when we looked at Insurrection, but it does seem to be on the decline. 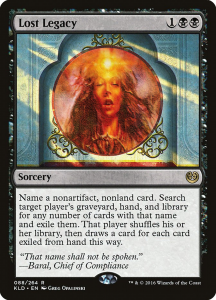 But what do you think? Would you mind sharing your thoughts? Are you surpr-eye-sed to see Mind's Eye on the downward trend? Do you swear by it, and if so, in what decks?

As always, shoutout to Nick Burgess (@MisterPlorg) here for helping with the data scraping!