The 600 - Reviewing Ikoria and Commander 2020 Commanders 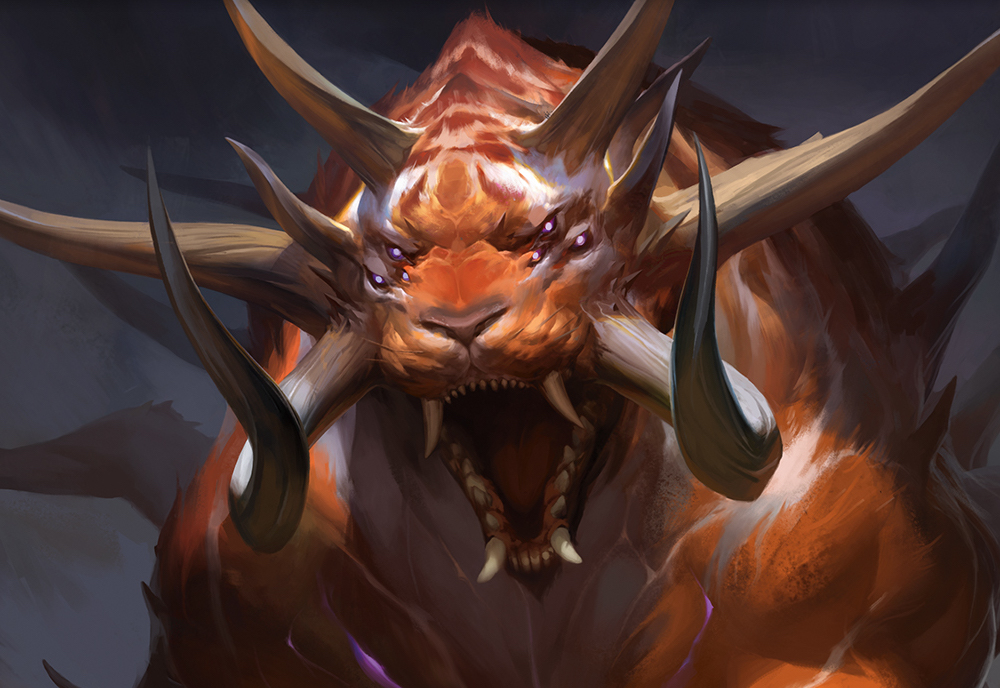 (Snapdax, Apex of the Hunt | Art by Viktor Titov)

Return of the Monsters

Prepare your best horrified, skyward gape. The 600 is headed back to Ikoria!

In this article series, I guess how popular new commanders will become after one year of play. The line is 600, so "Over" means I think it'll earn over 600 decks, while "Under" means under 600.

In today's article, we're reviewing the Ikoria and Commander 2020 picks I made one year ago. All results were screen captured on April 17, 2021, one year after the set's release (the pandemic made this a staggered release, so I went with its very first printings in Japan).

You can review last year's article here, though it's not required reading since I'll quote from it throughout the article. Let's get smashing!

EDH was one of the few formats that properly digested this new mechanic without nearly choking to death. I predicted that Companion would preclude many of these commanders from leading their own decks, and, for the most part, that rang true. Just check out these Unders.

Last year's predictions: Under for all three

Not much to say about these fellows, then or now. In fact, last year I spent a collective eight sentences on them (with 37 commanders to review, I had to be economic).

My prediction: Under for all three

The biggest surprise here: since I began writing this series in 2018, Jegantha, the Wellspring is the first five-color commander option to go Under. For shame, big Elmer! I thought I'd never see the day!

"If EDHREC’s Instagram comments are any indication, Jegantha might fall short because so many players want to Companion it with Jodah, Archmage Eternal. It’s easy to do so, and I think that will legitimately impact this card’s popularity as a commander."

Next up, our last three Companions. Did any surpass the mark?

My predictions: Over, Under, and Over

My first two misses of the set. Fear not, there were more!

Let's start with Zirda, who taught me a valuable lesson: stop trusting Boros. Here's my rationale from last year:

"If I learned anything from Feather, the Redeemed, it’s that EDH players love Boros commanders that do something besides combat."

Curse you, Feather! You led me astray!

And Lurrus? That one surprised me most. It's not like Jegantha, where widespread Companion use might explain the low figure. After all, Lurrus Companions just 49 decks.

My working theory: I unwittingly stumbled on Lurrus's problem last year when I dubbed it "Mini-Muldrotha." With so many big spells to cast in our format, a two-mana-value ceiling is just too miniature.

We got a cycle of five new Partner pairs from Commander 2020, each representing a different wedge. Let's see how they fared.

Last year, I criticized the odd mix of +1/+1 counter/blinking shenanigans these two offer. It appears many players agreed. Though I wasn't so accurate with my next pick...

This one surprised me! Here was my reasoning for the Under:

"Sadly, online conversation regarding these two has been overwhelmingly negative. People don’t care about their synergy with Hanweir Militia Captain or the newly printed Bastion of Remembrance. Folks think these two are too expensive for too little payoff; I’d have to agree."

This was the equivalent of letting the one-star Amazon reviews dissuade me from buying the vacuum. The detractors distracted me from this tandem's clear synergy with Aristocrats and Human tribal themes, both of which are quite popular. And that's not the only time I made this mistake...

Oof. This one hurts even more since I heaped praise on Cazur and Ukkima last year, only to give them an Under. Again, this was because nobody seemed to be talking about them—and Ukkima's a Whale Wolf, which is the kind of thing people talk about. Next time, I'll follow my gut.

Or not? I followed my gut with this pick, and look where it got me. My main beef was as follows:

"[Brallin and Shabraz are] at their best when you cast Brallin into [Shabraz] into a wheel effect, which is flashy when it works, but also fragile."

1,023 deckbuilders collectively narrowed their eyes at me and said, "Hold my beer." Brallin and Shabraz may be fragile, but for many players, the coolness justified the risk.

And our final Partners...

This pair was an easy pick due to their fun gameplay application, which I described as "straight up larceny." I stand by that characterization.

No, not Wedgie. Wedge. Let's talk about the Wedge commanders, starting with the most disappointing ones.

My prediction: Under for all three

Brokkos and Snapdax posted respectable (though ultimately insufficient) numbers. Akim, on the other hand, never had a shot. Here's what I wrote about the avian last year:

"If you’re playing Jeskai tokens, you’re probably one of the 1,972 players already playing Kykar, Wind's Fury. Akim competes in the same space, so while it’s an interesting deck, it may ultimately get overshadowed."

Only one other wedge commander went Under from these two sets, and it was this fellow:

After derisively nicknaming it "Apex of Blunder," I noted the Mutate issue, which turned out to be legit. If you're playing in paper, Mutate leads to more rules disputes than a children's game of four square. I'm guessing the mechanic's clunkiness has something to do with Vadrak's relatively poor showing—though I will say, my friend made a deck from this guy, and it's pretty impressive.

That's it for Unders in our wedge commander category. Now for the success stories!

My predictions: Over, Under, and Over

Jirina Kudrow was a predictable Over, though just barely. At 614 decks, she's a little low for a face card on a new commander product. But hey, she still made it.

Kelsien is the most interesting of the bunch. Here's what I wrote about him last year:

"Sure, Kelsien accumulates experience with Basilisk Collar, but he still needs ample support just to become decent. Also, I’m not hanging out with anyone nicknamed 'The Plague.'"

Nicknames aside, I underestimated how easy it is to grant deathtouch to Kelsein. But hey, in my defense, several methods came in sets subsequent to Ikoria. Think Rune of Mortality from Kaldheim, Zagras, Thief of Heartbeats from Zendikar Rising, and Falthis, Shadowcat Familiar from Commander Legends.

My predictions: Overs all

A strange thing happens during preview season card evaluation: one tends to get tunnel vision on a commander's applications. It certainly happened to me with Xyris. As you can see, that didn't stop me from going Over. But I did have a certain air of disdain for this card, as you'll probably notice in this excerpt:

"People are hyped about this card and I can’t understand why... It’s clearly a wheel commander, making tons and tons of tokens..."

That's true, but I failed to acknowledge the potency of Xyris's token generation ability without wheels. Virtually all EDH decks want to draw extra cards, which means that this commander often gets you money for nothing and your Snakes for free. Once you finally cast those wheel effects, the wheels start to fall off your opponents' gameplans.

Otrimi is an interesting one because it excelled despite the relative meh-ness of Mutate. It certainly helps to be Sultai (one of EDH's most popular color combinations), and the heavy concentration of Mutate cards in these colors is essential. Plus, he's just a playful little guy.

Not much to say about Kathril: if you like counters, you'll love it. Evidently, EDH players like counters. Next up...

My predictions: Overs all

These were all super predictable—especially Zaxara, who I dubbed my Can't-Miss Pick of the set. (Note: I have missed Can't-Miss Picks before, so I'm glad to be spared some embarrassment.)

This dude is a house. Well, not literally. It's actually an Elemental Dinosaur. But my point is, it's sweet—and popular, too. So popular, in fact, that it's the most popular commander of either set.

Let's begin with the duds.

I'm guessing the 10 people who built Yidaro decks also enjoy nibbling kale while listening to The Lumineers on vinyl. I mean, you must be a hipster if you're playing something this obscure. Or maybe they just really dig Dinosaur Turtles?

Excuse me for one second...

Thanks for waiting. Sorry about that.

Oh, no, nothing. Just had to answer a call. No big deal, it was just The 600 Ethics Committee.

Why were they calling? Oh, you know, they just felt like Facetiming. It had nothing to do with my terrible prediction, if that's what you're wondering.

You're asking if I called Kogla "nigh unkillable" and highlighted his "ETB value with Borderland Ranger, Eternal Witness, and Maul Splicer"? I may have.

And did I come to the conclusion that, "all that plus the flavor makes me think Kogla will be popular"? Umm...that quote was taken out of context.

...Alright, fine, I'll admit it. I gave Kogla an Over, yet it earned just 120 decks. It's one of the worst predictions of my career, right up there with giving Anje Falkenrath an Under (I don't want to talk about it). Let's proceed to the next pick before the ethics committee revokes my license.

Hah! This bald old fart couldn't fool me like that ape did! I predicted the General's daughter would outperform him, and indeed she did. Here's my zinger from last year's article:

"Aside from the crystal shoulder pad, this General is generally unimpressive."

This card was so niche that I had to cite an Unstable card just to fill some content.

"Sure, you can make your Nessian Boar a 10/10 or give your Infinity Elemental infinite toughness. But that’s about it."

The narrowness bore out, though I'll admit Zilortha finished better than I thought it would, especially for a sub-par Buy-A-Box promo.

This guy appears as a commander on MTG Arena frequently, though that's Brawl, not EDH. Chevill is ultimately just a solid value creature, which is serviceable but not splashy enough to attract 600 deckbuilders.

I still can't quite wrap my head around all of this card's interactions, though wrapping one's head around things sounds unhealthy, anyway. Suffice it to say that Rielle has plenty of tools at her disposal in blue and red, including (but not limited to) Faithless Looting, Careful Study, and Frantic Search. Easy to see why she went Over.

Despite being "skeptical of a half Human, half non-Human deck," I gave Winota an Over, which is a big deal considering my aforementioned mistrust of Boros. Fortunately, the gamble paid off.

One can actually do some pretty cool things with Winota, such as flipping pricey-yet-powerful Humans, like Lena, Selfless Champion, Angrath's Marauders, and Captain of the Watch. I also see Tibalt's Trickery under the New Cards header, which must have some spicy applications.

Kinnan was a slam dunk. I mean an easy, effortless slam dunk, like doing a double-pump windmill on a Fisher Price hoop. It's Simic, it's ramp, and it's free spells, all for the buy-in price of just two mana. A prodigy indeed.

Now I'm in the mood to see Godzilla vs. Kong—if only my wife would watch it with me. So far she's refused, but I'll see what I can do. Until next time!

Kyle A. Massa is a writer and avid Magic player living somewhere in upstate New York with his wife, their daughter, and three wild animals. His current favorite card is Wilson, Refined Grizzly. Kyle can be found on Twitter @mindofkyleam.