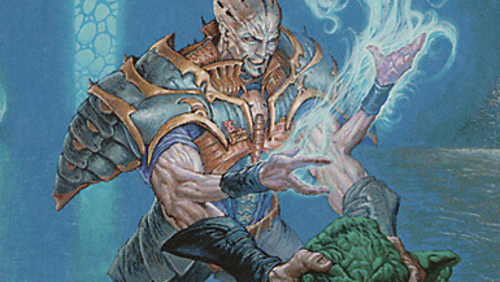 It’s that time again! Welcome back to Weird Harvest, where misfit commanders wield forgotten spells to create head scratching situations. This week we tackle a reader request from Darrenn E Canton! He asked if we could break Ertai, the Corrupted. We’re going to shatter this jank commander or die trying. This commander is a janky control player’s dream. Who doesn’t want to turn a sacrifice engine into pure denial to control the game? That’s not to say we don’t a few issues to address to make him effective. Let’s take a moment to analyze some of his strengths and weaknesses.

Hard Counter Ability: Our activated ability is without restriction. We outright counter any spell so long as we pay the price. The Esper (Black/White/Blue) wedge is well equipped to make use of this type of ability, so we have a plethora of options available to synergize with it.

Sacrifice Engine: Any EDH enthusiast knows that a well-tuned sacrifice engine is a problem that needs to be addressed. When left unchecked it can usually lead to a snowball effect that puts everyone that opposes it behind. Our ability provides us with a sacrifice engine that can also protect the engine itself, which is a fundamental problem for our enemies.

Broadcast Threat: Known threats that just loom over the table like a boogeyman can provide tremendous leverage over opponents. They tend to greatly influence decisions, which can usually add up slowly to massive tempo loss without the enemy being aware of it. This can directly impact the flow of the game.

Transparent Game plan: Even novice EDH players will readily identify this commander’s strategy. This means our opponents go into turn zero with a fair bit of competitive intelligence to create an effective counter-strategy. This can create an uphill battle for us.

Mana Restricted Ability: Nothing good comes for free, and our activated ability is no exception. We must pay one blue mana to activate it, which is nothing to scoff at. If we don’t have the mana requirement, then everyone at the table will no the coast is clear for any shenanigans. This is a bad spot to be in.

Linear Design: Counter magic is powerful. Nobody disputes this fact. However, hard counter as a strategy can be extremely limiting as a pilot and ultimately annoying to play against. This means that we must take extra care in making sure our deck isn’t an aimless control fest that halts the board without resolution.

Now that we have a decent idea of what this commander has to offer we can work on crafting a 99 that makes effective use of him. Given the above observations it would make sense to focus on a token-based win condition. Tokens give us the fuel we need to make use of our commander’s ability with minimal impact upon us while putting us on a swarm-based combat strategy. Let’s look at some ways to fuel up.

Creating tokens is easy for Esper to do. We have several creatures that yield us tokens, but better yet we have several enchantments that do as well. This is great for us because creatures and enchantments are the two things we need plenty of for our ability to be relevant. Here’s the list of token creators that I think work best for my build.

We intentionally went for overlap on enchantments and creatures that provide tokens. This ensures that no matter what position we are in that we have a renewable resource at our disposal so that we can rebuild. This makes our deck resistant to board wipes and resets, which is a nice bonus. Now that we have plenty of ways to generate tokens it’s time to look at another way to synergize with our commander’s ability.

The Fragile Art of Existence

Any deck that has a sacrifice engine wants a good recursion package. There’s nothing better than using your creatures as a resource whenever you know that they’ll just come back to the party. We aren’t running a Golgari (Black/Green) deck, so we don’t have to go “all in” on recurring. We need just enough to ensure that we’ve got a steady flow of options.

You’ll likely notice a keen focus on lands that provide recursion. This is perhaps the most powerful source of recursion that we have available because lands aren’t susceptible to counter magic, and they cost us nothing more than a slot to benefit. Of course, this means we’ll draw a fair bit of land hate, but the reward far outweighs the risk in this instance.

Now that we have some renewable fuel for our fire we can focus on fleshing out the rest of the deck. Let’s look at the 99 I came up with.

This is certainly a big pile of janky cardboard, but it’s nothing without a deep understanding of how it goes to work. Let’s look at the numbers and see what we are dealing with.

We needed to keep our curve nice and low to ensure that we always have mana open to activate our abilities. We hit an average curve of 3.26, which is plenty low for an EDH deck. We have a split of 22% creatures and 17% enchantments, for a total of 39% of our deck being pure gas for our commander’s ability. We have 38% of our deck being lands, which is fine for a deck that has a curve as low as ours. There’s a disparity between our mana source distribution and the mana distribution required by our cards vs. our lands. This would normally be quite a problem, but our deck only ever needs no more than the ability to create two of any type of mana at one time. That mitigates this disparity quite a bit. Overall, we can expect to consistently hit double white with a source of black and blue by turn four across an average of games.

When the table figures out how your janky strategy works.

That’s it for this week’s installment. I hope you enjoyed diving into this amazing reader request. I personally love this commander and would be honored to do more reader requests in the future. If you can think of any commanders or archetypes that you would like to see feel free to post them into the comments below! Feel free to offer your suggestions and approaches to this commander or deck style as well because I love seeing innovative ideas and perspectives. That’s how we grow as builders and players. Thank you so much for reading and keep Magic janky!