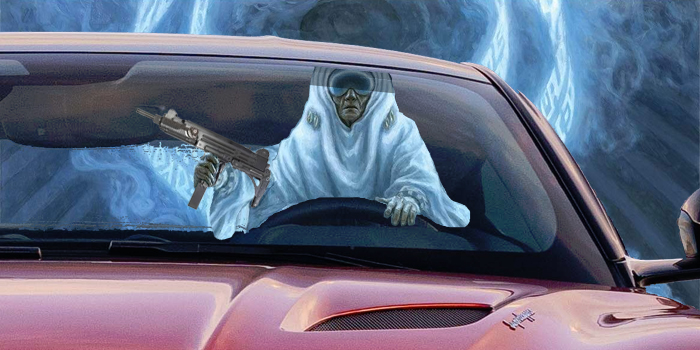 Coming Soon to a Table Near You

Power Sink is back with a vengeance. In a world dominated by high-powered commanders, one article series is out to take them down (in power level). This time, it’s teaming up with Grand Arbiter Augustin IV to get him out of his chair and into the streets.

Grand Arbiter comes in as the number 158 commander on EDHREC, touting 1,198 decks. In terms of just Azorius commanders, this makes him number three with a bullet at the blue-white box office. Augustin has been in this game a long time, originally printed back in 2006. During that time he’s ruffled a lot of feathers and earned a 2.22 Salt Score, making him the 23rd saltiest card in the entire format. With his tax effect, Grand Arbiter is known for keeping other players from doing what they want to do by covering it with a bunch of bureaucratic red tape, while his cost discount makes it easier to cast his own spells, which often make sure everyone else has to go through even more of the proper protocols.

In case his own tax effect wasn’t enough, Grand Arbiter is running even more mandatory tax effects like Thalia, Guardian of Thraben, Spelltithe Enforcer, and Dovin, Hand of Control, making it tough to pay for the optional tax cards like Smothering Tithe, Rhystic Study, and Wandering Archaic.

There are also a bunch of cards in the average deck that just straight up disallow things: Narset, Parter of Veils stops additional card draw, Hushbringer shuts off ETB and Aristocrat strategies, Fatespinner makes opponents skip one of their phases, and Drannith Magistrate says “no” to anything not cast from a player’s hand, which is bad news for anyone who wants to cast their commander. Board wipes like Cyclonic Rift are somehow made even worse than normal, as opponents have to jump through tons of hoops to replay their cards.

The end result is a deck that makes it nigh impossible for opponents to resolve anything, while the Grand Arbiter deck takes its time to put together a win with Approach of the Second Sun or some sort of combo.

However, this has been the typical Grand Arbiter deck for long enough. His reputation has been smeared, so for this article, he’s out for revenge. In the past, he made them pay mana, but this time, he’s just going to make them pay.

I’m All Out of Bubblegum

For this deck we’re dropping the stax and tax and taking the fight to our opponents. People don’t expect blue and white to leave opponents black and blue, but Azorius fliers has long been a consistent combat-focused draft archetype, and there have been several excellent creatures printed throughout Magic‘s history that are ready to bring the pain. Instead of trying to slow down our opponents, we’re going to capitalize on our commander’s cost reduction to drop devastating haymakers way ahead of schedule.

We’re focusing heavily on multicolor creatures to take full advantage of Arbiter’s discount. Shabraz the Skyshark, Ishai, Ojutai Dragonspeaker, and Sunscorch Regent become big threats very quickly, and Shabraz even has the added benefit of giving Grand Arbiter flying, so even our commander can get in for a little extra damage. Conveniently, some of our heavy hitters, like Ethereal Valkyrie and Dragonlord Ojutai, draw us cards when they head into combat.

We aren’t really leaning on lifegain, but Drogskol Reaver can take advantage of the limited lifegain effects we happen to have, along with its native lifelink; just make sure the Reaver isn’t out at the same time as Shabraz, or you’ll be forced to draw your whole deck! With so many multicolor spells in this list, Hero of Precinct One is going to generate a lot of tokens. Finally, if it manages to connect, Medomai, the Ageless can give us an extra turn, complete with another attack step, doubling up our beats.

Do You Feel Lucky? Well, Do Ya, Punk?

Eventually, our opponents will likely notice that we’ve become a threat to their organization and will send their assassins (read: removal) to deal with us. Of course, we’ve prepared for this with a suite of protection effects. Linvala, Shield of Sea Gate and Selfless Spirit offer on-board protection for our creatures, along with the capability to do some damage in the air. Speaking of damage, Akroma’s Will and Unbreakable Formation can protect our board or provide us with even more combat prowess.

The protection doesn’t stop there! Unsettled Mariner adds a tax on targeting our permanents, and while opponents might not want to see another tax effect, it’s not like we’re making them target our stuff! Lightning Greaves and Swiftfoot Boots are format staples for the protection they provide, but the haste they give is important for our creature-based strategy. Cloud Cover will make it hard to keep our beaters down for good, since we can save them by returning them to hand, and even though they need to be recast, our commander makes that much easier. We’ve even got a few counterspells like Dovin’s Veto and Delay to either protect our board or shut down a problematic enemy spell.

Having a few big, evasive creatures will get you pretty far in a Commander game, but we’ll need a bit more weight behind our punches to take out three opponents. Both Duelist’s Heritage and True Conviction give us that one-two punch with double strike, while Thistledown Liege takes advantage of the fact that most of our creatures are multicolored. Plus, since all of our creatures are white, we’re going to want to choose ‘white’ for Heraldic Banner.

From the recently-released Innistrad: Midnight Hunt set, Intrepid Adversary can be a a huge boost, provided that you have a lot of mana. With the numerous card draw effects in our deck, Righteous Authority can help do a lot of damage. For those times that flying just isn’t enough, Midnight Pathlighter will make blocking nigh impossible, and on top of that, we can even get some extra value from venturing into the dungeon!

There’s no denying that Grand Arbiter has a bad reputation, but I think much of the ire comes from what people expect from the 99. While that one-mana tax can be annoying, it doesn’t really stop anyone from playing the game; people supposedly pay the one for Rhystic Study, after all. Grand Arbiter is just as much a ramp card as it is a hatebear, and I think anyone looking to play a casual version of this commander would do well to treat it this way when brewing and when discussing a deck in a rule zero conversation.

I’m not the first person with this idea for a Grand Arbiter deck – back in 2017, Commander Cookout podcast did an episode on a very similar deck. Of course, a beatdown deck isn’t the only way to approach this commander. Human tribal and Persistent Petitioners show up as notable themes on Grand Arbiter’s EDHREC page, and Coach JRO (a.k.a Unsummoned Skull on Twitch) has a spicy Storm deck he was kind enough to share.

It’s about time for us to walk away from this explosion without looking at it. Let me know in the comments if this Grand Arbiter deck is worth the price of admission and if there are any commanders you’d like me to line up for the inevitable sequel.

Lenny has been in an on again off again relationship with Magic since Fallen Empires. He fell in love with Commander in 2010 when his friends forced him to build Niv Mizzet, the Firemind and has been with the game ever since. When he's not turning cardboard sideways or trying to justify using bad draft commons in EDH decks you can find him playing something from his massive board game collection or practicing the Brazilian martial art Capoeira.