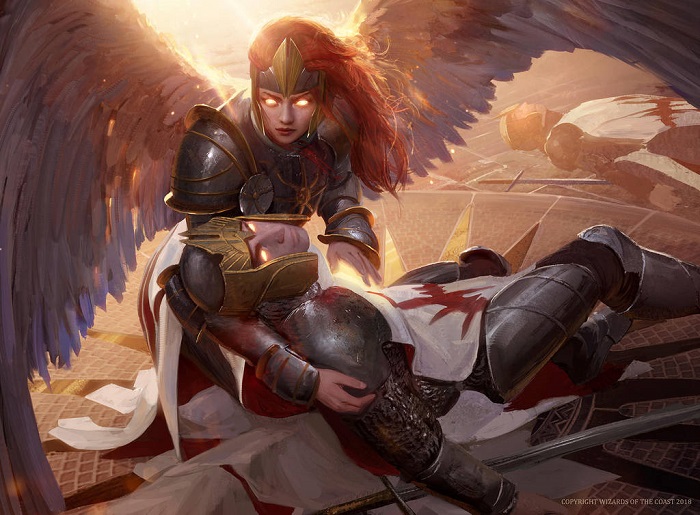 “The world, I’ve come to realize, is a blank canvas on which to paint.” —Ixidor, reality sculptor

Commander is the best Magic: The Gathering format for expression. With just about every card available to a deck builder, Commander is truly a blank canvas, and any idea is at least worth trying out. Outside of the most cutthroat of tables, even the most far out strategies can find some wins.

This is Mind Bend, an article series dedicated to translating established strategies into the “wrong” colors. I hope to inspire you to look at the format in a different way, under a different light, and perhaps find something you might not have considered before.

This first article is inspired by the new Guilds of Ravnica card Chance for Glory. While others might be talking about new commanders like Lazav, the Multifarious or the instant auto-include Assassin’s Trophy, the card Chance for Glory jumped out at me because of something I tried to make work in the past.

A year or so ago, I put together a mono-red deck that relied on looping the three extra turn spells available: Final Fortune, Last Chance, and Warrior’s Oath. It wasn’t a great success, maybe because it also centered around Vent Sentinel and red walls, but probably because the deck never had a way to consistently complete its ultimate strategy of taking many turns in a row. Like the new card name implies, I find that now is my Chance for Glory. The new instant provides a fourth extra turn option, so the deck will be that much closer to consistency, though it does require a switch to at least Boros from mono-red.

Great. From one “bad” color to the “worst” two-color combination in the format. Time to look for more inspiration, or at least a road map for how to put this thing together.

Taking extra turns lies almost exclusively within the color blue, from game winners like Expropriate and Time Stretch to more reasonable, but still powerful effects, like Time Warp and Temporal Mastery. This goes all the way back to Alpha, where you find the very-banned-in-Commander Power Nine card Time Walk. Nowadays, blue doesn’t get extra turns for two mana like Time Walk. The mana cost is usually 5 or more, and in the most recent iterations, those spells exile themselves on resolution, or are shuffled back into the deck. See cards like Karn’s Temporal Sundering or Nexus of Fate for more information on Wizards of the Coast’s recent extra turn spell design philosophy.

But in the older days of Magic, cards like that would stay in the graveyard, where they’re ripe for abuse. Let’s look at EDHREC’s top played cards alongside one of the most basic of extra turn spells - Time Warp. Not much uniqueness here, huh? A handful of the best blue cards alongside a few extra turn spells. The top cards section isn’t much of change from this model, either. Yep, more of the same. The only card to note here is Snapcaster Mage, since when coupled with Time Warp, you can cast it at least one more time out of the graveyard.

Looking at the top creatures not in the two above categories, a different story starts to unfold: Now here’s something more focused! Two cards to pay attention to here are Eternal Witness and Archaeomancer. They allow you to get back cards like Time Warp to keep the extra turn train running. Add in another card on this list, Deadeye Navigator, and you can loop as many turns as you want for 7 total mana.

That’s more like it. I don’t want to just cast one extra turn spell, I want to cast them over and over again!

Another one of blue’s strengths is obviously the ability to draw many, many cards, which makes the extra turn strategy come together rapidly, considering that you will see much more of your deck than other players might.

What’s interesting, though, is that outside of a few cards that can fish instants and sorceries out of the graveyard, blue struggles with casting these cards again and again. Blue is the absolute best at copying creatures or artifacts, but despite being heavily instant and sorcery focused, can’t copy those with a great efficiency.

But you know what color can?

Seeing Red (and Green and White)

Taking cues from what we learned about on the EDHREC page for Time Warp, let’s apply them to a non-blue deck:

Well, part one is on lockdown, with Chance for Glory, Final Fortune, Last Chance, and Warrior’s Oath as the go to spells. The great thing about each of these cards is their very low mana cost and the fact that they don’t exile or shuffles themselves on resolution That means they’re prime for the picking with any number of cards that can Regrowth spells to our hand. Regrowth? Hmm. Earlier in this article, one of the top played creatures in decks containing Time Warp was Eternal Witness. Why not play to that strength? Green is the best color for returning anything back to your hand. Or at least it was originally. Recently, Wizards of the Coast has tweaked that ability slightly in green so that the color can only return permanent cards back to hand. For an example, see the recent reprinting of Nature’s Spiral in Dominaria for where the design team has been pointing in recent years.

But this is Commander, remember, you can play whatever you want. So this Boros deck is shifting to Naya to welcome Regrowth, Recollect, Eternal Witness, Skullwinder, and Wildest Dreams into the fold. Having many, many ways to recur the only four extra turn spells available means that the deck has more “effective” copies of those cards, as a card like Regrowth is just a Final Fortune for two more mana with the latter in the graveyard. Red itself is no slouch in being able to loop spells out of the graveyard. It offers the fantastic Charmbreaker Devils, which if the deck’s pilot is over so lucky to have only an extra turn spell in the graveyard, the turns won’t stop coming. To add to that, red also provides Goblin Dark-Dwellers and Past in Flames, which don’t return cards back to hand but act as Regrowth effects in their own ways. One tip when trying out this strategy: flashback the return to hand cards, and get back the extra turn spells, as you never know when you’ll want them back in the graveyard. And as a bonus, the deck can also run the fantastic Naya Charm as another Regrowth, but at instant speed with other great options tacked on if need be.

So far, the deck can make extra turns and pull those spells out of the graveyard at will. How about playing to another of red’s strengths - copying spells? One turn is good, but three turns is better when utilizing cards like Howl of the Horde and Increasing Vengeance. This deck will feature a good portion of cards with similar copying effects to also maximize the four extra turn spells available. Copy spells also have the added bonus of copying any ramp spells like Farseek or any card draw spells. Card draw, what to do here? The deck is firmly in Naya, so the best two colors for drawing cards are out the window. Still, with all the copy effects in the deck’s game plan, spells like Cathartic Reunion and Tormenting Voice get better as the cost of discarding cards is limited to the original spell and not the copy. Plus, with all the Regrowth effects, discarding cards isn’t that big of a deal. The Opposite of Losing

I feel like I’m still missing something... Oh yeah! All the extra turn spells say, “At the beginning of that turn’s end step, you lose the game.”

No worries, though. Being in Naya means that Sundial of the Infinite, Platinum Angel, Angel’s Grace and Gideon of the Trials are all available and going straight into the deck. Add in a Call the Gatewatch and an Enlightened Tutor and losing the game should not be as much of a concern. Plus, losing to your own Warrior’s Oath is not the worst way to bow out of a pod. Winning the game can be tricky if all that’s happening here is looping turns. You might as well be playing with yourself. To speed that along, the traditional package of spellslinger go-tos like Young Pyromancer, Guttersnipe, and Monastery Mentor will fit this strategy just fine. Outside of the previously mentioned near-infinite turns trick with Charmbreaker Devils, the deck can also employ the occasionally seen in Legacy combo of Final Fortune + Isochron Scepter. Isochron Scepter can do a few different things for this strategy. It can also be paired with Noxious Revival to mimic the Charmbreaker Devils trick, or it can be paired with Angel’s Grace to act as another Sundial of the Infinite (or just be a repeatable Fog). On top of that, slapping a Reverberate on it means a build your own Mirari. In the commander slot, the duo of Bruse Tarl, Boorish Herder and Tana, the Bloodsower might be the best fit at the time. To be honest, no Naya commander fits perfectly into this strategy, but at least with these partners, the deck can make tokens upon tokens during those extra turns, or simply make Bruse a double striking 3/3 with lifelink and knock some players out of the game. To show my commitment to this article series, I will be building most of the decks I brew here in paper and getting some real-world experience at my local Commander league. I hope to use subsequent articles as a way to post some new insights and lessons learned.

Deckbuilding in Commander is a beautiful form of expression - of both the creator and the tinkerer. If you keep at it and ignore the notions of the correctness, at least a little bit, I’m certain you to can create something unique, personal, and ultimately mind bending.