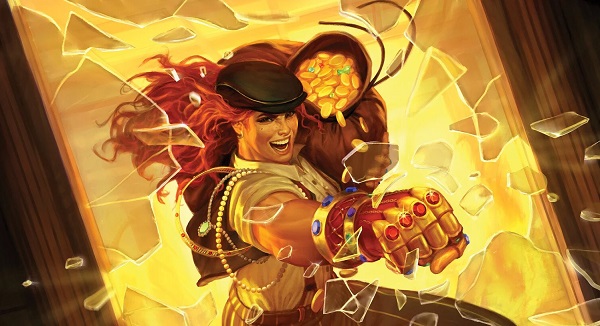 Welcome to Too-Specific Top 10, where if there isn’t a category to rank our pet card at the top of, we’ll just make one up! (Did you know that Chainer, Nightmare Adept is the only commander under a dollar that allows you to cast hasty creatures from your graveyard?)

At the beginning of each new year, one of the traditions I like is to go back through some of my favorite or most successful articles from the past and revisit them. One of my most successful ever is ironically also one of the simplest: budget commanders.

The original top ten was done in 2020, and while there's no doubt that the list will have changed since then, I do wonder how much the familiarity with the top budget commanders will have as well. In 2020, I would wager that most habitual Commander players could probably list at least half of the top ten overall commanders from memory, and probably knew most of the commanders you could buy on a budget that were in the top 25.

In 2023, I sincerely doubt the ability of literally anyone to list the top ten commanders from memory, and I don't know that I could have told you a single popular commander that cost under a dollar before I looked through this list. It should be interesting.

There's always the temptation to make things ever more specific, but given that this is a retread, why not just get to it and see what budget brews people are making?

Criteria: Commanders that cost less than a dollar. As is tradition, all results are ordered by EDHREC score.

Not in a million years would I ever have thought of Kess, Dissident Mage as a "budget" commander. When she debuted in Commander 2017, she started off at $14, ultimately climbing to $20 in 2019 before crashing with her reprint in Modern Horizons. She was then reprinted again in a Streets of New Capenna Commander deck before being reprinted yet again in the Wizards of the Street Secret Lair this month.

Regardless of how she got here, if you're looking for a powerful budget commander, you need look no further. Kess, Dissident Mage giving a once-a-turn Flashback to all your instants and sorceries has always made her one of the best spellslinger and combo commanders out there. After all, the only thing better than casting a Dark Ritual once in a turn has got to be casting it twice in a turn, right?

I always feel a bit weird highlighting commanders like this. Don't get me wrong, if you're into Rogues, then Anowon, the Ruin Thief can definitely make that work for you. There's also no doubt that you can make them work on a budget. Chances are good, though, that if you aren't specifically into Rogues, you're not going to rush out and build them, budget or not.

What I appreciate about Anowon is just how broad his Rogue ability is. It'll be Rogue themed no matter how you craft it, but there are a ton of chances to make it more interesting than your average deck by leaning hard into either the mill or card-draw aspects of Anowon's ability. It's rare a commander piques my interest when it's a lord of some creature type I don't care about, but I must admit that the idea of a Rogue control brew that simply removes every obstacle in the way of my admittedly probably already very evasive Rogues does sound like a fun brewing challenge!

While it feels like X spells have gotten a lot of attention over the years, I was surprised to find there were only three total explicitly dedicated X commanders that had been printed:

Of the three, Zaxara is the one that you can tell was supposed to be the dedicated Hydra commander, both having the type itself and creating Hydra tokens. Interestingly, however, Zaxara has really not been as type-cast in this role as might have been intended. Sultai colors have an almost unending supply of interesting X spells, including quite a few finishing spells that in no way rely on combat. Combine that with it tapping for two mana itself, and there's really no reason to stick to the obvious multi-neck plan.

Honestly, with Villainous Wealth, there's not even a reason to stick with your deck's plan.

The Polymorph commander that can't actually play Polymorph, but that hasn't stopped Atla Palani, Nest Tender from being one of the most popular commanders out there. Just recently having dropped out of the top 25, Atla Palani allows any Naya player to roll the dice on huge creatures, loads of enter-the-battlefield abilities, or just double up on Egg tribal. My favorite use for her, though? If you've never seen a fully optimized Changeling build, boy, that's a thing to experience. Combine that general goodness with a free Polymorph every time you feed one of them to a Greater Good, and it's not hard to see how this little Egg-defender can quickly get out of hand.

Group slug in Orzhov isn't something I usually pursue, but it's not hard to see the appeal here. Making everyone lose life while you're in the colors best known for gaining life? It's an easy road to victory. Combine that with Liesa, Shroud of Dusk' lifelink already and an easy discount that lets you keep casting her from the command zone over and over again, and you've got yourself a winner.

It really goes to show just how well the Strixhaven Commander decks sold when Osgir, the Reconstructor is under a dollar despite not yet having a reprint. The top Boros commander, beating out even the vastly more powerful and older Winota, Joiner of Forces by 3,000 inclusions, Osgir is the quintessential artifacts commander in the color combination. Whether you're doubling up on Sol Rings, Sad Robots, or Myr Battlespheres, Osgir is going to get you a ton of value, or maybe even just win the game outright!

Players begged for a Werewolf commander for years, and Wizards finally delivered in Innistrad: Midnight Hunt. Tovolar, Dire Overlord not only draws you cards for each Wolf or Werewolf dealing combat damage, he also helps transform them with his Human form and has them trampling over the top with his Werewolf form.

Which is all well and good, but you have to ask: is all that worth tracking Day and Night?

Keyword soup, flying buffs, and token generation, all under one roof? Surely Alela, Artful Provocateur must have been the most powerful commander to come out of her set, right?

Easy Brawl Precon dunks aside, Alela is still a very powerful commander, even if she doesn't quite stack up to the "draw a card for doing what you were already doing anyway" level of Korvold and Chulane. Combine that with her being flexible enough to helm all sorts of different strategies, and it's no wonder that she's as high up on this list as she is!

2. Isshin, Two Heavens as One

Still, as much as generically good commanders will always have a spot in some player's hearts, there are a ton more who want something more specific to build around. Enter Isshin, Two Heavens as One. A mere 1,300 inclusions behind the most popular Mardu commander, a certain $70 Vampire lord, Isshin has been rocketing up the ranks quickly over the past year as more and more cards are printed that trigger at the beginning of the combat step.

Which really just leaves one question: how long until we see Panharmonicon for combat damage, since we've more or less covered all the other popular triggers and phases?

Don't get me wrong, Zombies having 29,000 dedicated decks on EDHREC is impressive, it's just not anywhere near the 39,000 that Dragons have. The main difference between those creatures, though, is that the best Zombie commander, Wilhelt, the Rotcleaver, makes this list at a price of 99 cents. The best Dragon commander, The Ur-Dragon, on the other hand? It currently costs between $80 and $90.

So rejoice, Zombie hordes! You may only desire simple brains, but it turns out such mundane dreams are not only readily available, they're cheap to boot!

Given how much we all love a budget, ten commanders isn't gonna do it, I don't think!

Top 25 Commanders Under a Dollar

Looking through this list, it's hard to wonder why we're not in a renaissance of budget brews in the Commander format right now. There are several cEDH commanders in this budget list, not to mention general power all around, all for under a dollar. Sure, the most "optimal" choices you can fill the 99 with by and large have high pricetags, but I doubt anyone who thinks that a top-tier casual deck can't be built out of all of these crazy powerful and synergistic choices.

But hang on a minute, we'll cover that in the poll.

This totally unbiased poll has been brought to you by Tasigur, the Golden Fang, the commander that has both been at the top of the commanders list before and had multiple cEDH decks built out of it with varying strategies, which would now be number 30 on this list of budget commanders. Seriously, why are we spending thousands of dollars on this hobby?

Finally, what is your favorite budget commander? Have you ever built a budget deck? What was the budget, and how did it do? What are your actually unbiased thoughts on competitive EDH on a budget?

Let us know in the comments, and we'll see you at the plywood over stacked milk crates table we built to get a game night in!