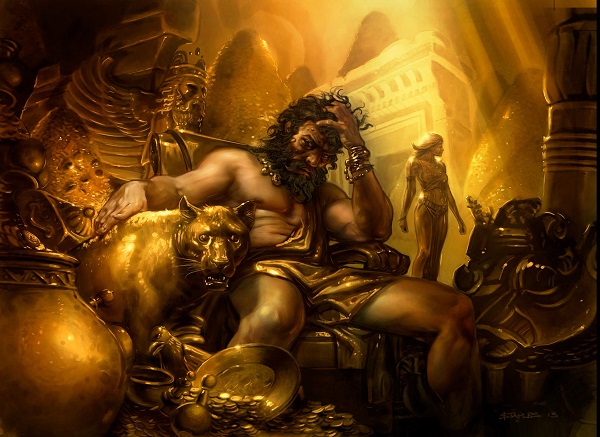 Welcome to Too-Specific Top 10, where if there isn’t a category to rank our pet card at the top of, we’ll just make one up! (Did you know that Zedruu the Greathearted is the only commander under a dollar that can allow you to gain X life and draw X cards?)

Alright, time to make a budget deck! Let's see if we can make a fresh take on some of the top commanders out there by lowering the dollar amount - oh.

Alternatively, I suppose I could drag out an Edgar Markov precon and sell its commander to fund an entire budget build on its own.

Top 10 Commanders Under a Dollar

The price of popular commanders is soaring through the roof, with the Top 20 Commanders averaging out to a total cost of $14.78 per commander. Even if you go further down the list, it can be difficult to find a commander that won't break your entire budget in one go.

So, how about we filter out all the noise, like we'd do when building on a budget, and just look at the commanders that will fit the simple constraint of costing less than a dollar?

Criteria: Cards that are legal to play as your commander that cost under $1. As is tradition, all results are ordered by EDHREC score.

The once-quintessential Sultai commander has been replaced a dozen times over since its initial printing in Fate Reforged. Combine that with two reprints in the last three years, and what you get is rock-bottom prices. Don't let the price tag fool you, though! Tasigur, the Golden Fang can still Delve with the best of them. If you can fill up your own graveyard in the three colors that're best at doing exactly that, you'll never pay more than a single black pip for your commander. Then, if you can accrue ludicrous amounts of mana in two of the colors that're best at doing exactly that, you can start recurring things from the graveyard multiple times a turn to value your way to victory.

Just in case you were having trouble finding a way to do all that on a budget, you might check out Tasigur's budget page!

9. Elsha of the Infinite

While Elsha of the Infinite never hit the ubiquity in Jeskai that Tasigur did in Sultai, there's a lot to be said for Experimental Frenzy-ing instants, sorceries, enchantments, artifacts, and planeswalkers off the top of your library at instant speed. The best part about that whole list? Elsha is great for all kinds of builds, from Spellslinger to Enchantress to artifacts to Superfriends. What they'll all have in common is some sort of topdeck manipulation, so be sure to grab Retreat to Coralhelm in addition to the other budget cards on Elsha's budget page.

Just in case you thought that the entire budget commander list was going to be has-beens, Brago, King Eternal graces us with his presence at the #8 slot. Still the premiere blink commander, Brago needs no introduction. You know him from all the times that he's hit the table and everyone in unison has expressed that he can't be allowed to stay on the battlefield or the game will get out of hand. You know him from the repeated blinking of a Stonehorn Dignitary ensuring that you can't attack for the next 15 turns. Most importantly, you know him from four-hour games that have no end in sight, and as such, I'll be forgoing Brago's generic budget list for a list of actual, concrete win conditions that you can acquire for him for under a dollar:

Brago Win Cons (In No Particular Order, the Sacrilege)

Osgir, the Reconstructor is barely hanging on to his budget status as it is, and I don't think he'll stay under a dollar in the long run. All the more reason to build him now! Unlike many of the Boros commanders we've seen over the years, Osgir cares about artifacts in general, rather than Equipment specifically, making him a much more general commander. Not only that, but his copy ability is off-the-charts nuts, routinely gaining you more mana than it costs when it comes to mana rocks, and doing insane things when copying artifacts that you normally only get one copy of, like Lodestone Golem and Steel Overseer. On top of this, they went ahead and gave him a 4/4 vigilance body and an artifact sac outlet that also happens to buff creatures, making him easily the most powerful and flexible Boros commander to ever see print. (Okay, okay, Zirda, the Dawnwaker might have something to say about that.)

As for what works well with him, well... artifacts. Past that, the budget EDHREC page itself isn't so much of a help, because it basically just lists the contents of the Osgir Precon. So uh, get on that more unique brewing, folks!

Apparently people prefer the more specific commanders, since Syr Gwyn, Hero of Ashvale is still beating out Osgir. Honestly though, what's wrong with a little hand-holding during deck construction? Syr Gwyn will lead you right to a Knights with hammers build, and in three colors, there's still plenty of ways to go with it. If you're planning on staying on a budget, then keep in mind that various Swords of X & Y aren't going to be on the menu, so you might instead have to opt for some Equipment that are expensive in mana rather than expensive in dollars, such asArgentum Armor.

The interesting thing about Anowon, the Ruin Thief is the dual nature of what he wants to do: both mill and deal combat damage with a bunch of Rogues. His 'Lord' ability will buff up lots of creatures that already have evasion or card draw stapled to them, while his card draw will keep your hand full of more Rogues to throw down onto the battlefield. If you're looking to go full mill, however, there are tons of options from Anowon's budget page that will do just that:

While this is patently untrue, Feather, the Redeemed feels like the first of the non-Equipment, non-Combat-centric Boros commanders. But even if she wasn't the first one... she might have been the first good one?

I'll be the first to defend how fun Tiana Pacifism tribal can be. I can more than defend brewing a Group Slug deck with Archangel Avacyn, or a Ball Lightning tribal deck with Brion Stoutarm. I enjoy Repercussion shenanigans with Firesong and Sunspeaker, the OG Attack Matters deck with Basandra, Battle Seraph, and even Depala Vehicles. However, at the end of the day, every single one of those examples feels a bit like the most popular Boros commander from the early days of Commander, Razia, Boros Archangel. They do things, and those things look fun, but they're also severely underpowered while doing it.

Not so with Feather, the Redeemed. A 3/4 flier for three with card advantage stapled to her, she's the epitome of pushed. While we'd get that with other Boros commanders further down the line (Winota, Joiner of Forces, Zirda, the Dawnwaker, and Hofri Ghostforge come to mind), Feather was the first to push that envelope with a bonkers stat line and an archetype-defining ability all at once. Even better, you can build her on one of the cheapest budgets out there!

I have a bit of a bone to pick with Kalamax players, and it's this: why is Arcbond nowhere on Kalamax's budget page? Or its normal page, for that matter? If you've never played with this three-mana boardwipe in multiples, it can straight up win games. Or lose them. Or tie them. It's the definition of playing with fire, and I for one am all about that life. Sure, you could play Chandra's Ignition instead to deal damage just to your opponents and their creatures, but why do that when you could find two indestructible creatures on the board and make them ping each other (and everything else) for all eternity?

I guess what I'm trying to say is, while there are gross things to do with Kalamax and your general EDH stalwarts of ramp and card draw, don't forget that just burning your opponents to death is a great option as well. A single copy of Comet Storm isn't enough to get the job done, you need multiple win cons!

While Zaxara, the Exemplary is mostly known as a Hydra tribal commander, there's no shortage of things you can do with a bunch of X spells, as evidenced by Villainous Wealth seeing play in 91% of Zaxara budget builds. The real fun is looking at all of the Power Sink and Syncopate variants (which are finally seeing some more play in Zaxara decks) and which will counter a spell while creating a Hydra as well. This got me wondering, could you build an 'X only' Zaxara control build, and all on a budget?

Well, yes, of course you can! Whether or not it's a good idea to play an all X-spells deck that has essentially no ramp, is an entirely different story.

There always seems to be a bit of interest in how these lists are made (this seems like a good time to stress once again that they are based on EDHREC score, NOT my personal opinion), and people are often surprised that I’m not using any special data or .json from EDHREC, but rather just muddling my way through with some Scryfall knowledge! Except this week, I just went off of the Top Commanders list here on EDHREC instead.

It was a bit of legwork to find all the price tags manually for this Top 10, but it was a fun kind of hunt. So let's keep on doing it! Tasigur is fun and all, but if I'm looking for a memorable budget build, I want something even more off the radar. So let's just keep going down the list, shall we?

Top 25 Commanders Under A Dollar

One of the most important conversation in EDH, especially these days, is the pre-game discussions to help make sure the entire table has evenly-matched power levels. I can't help but wonder if budget still gets floated out there by players as a means of defining power?

Finally, what's your favorite budget deck? When you're building on a budget, do you take the commander into account, or is that the one card that you'll grab at any price? Do you include your commander's price tag as part of the overall budget of the deck at all?

Let us know in the comments, and we'll see you at the folding table you inherited from that one party that happened at your place back in college, and which is somehow still just... trucking along.