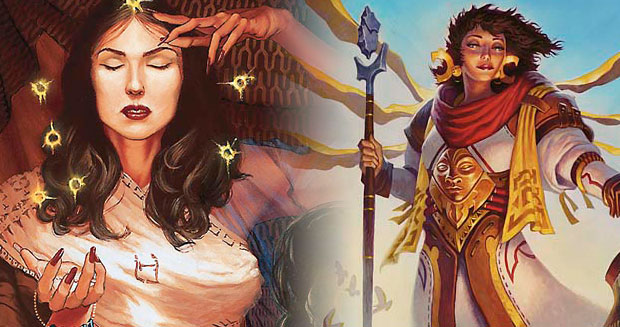 Welcome yet again to another edition of 60 to 100, your favorite series on taking 60 card archetypes and bringing them to the world of Commander. This week I'm taking another reader request to cover a deck, and it happens to be one that I really enjoy this time! In case you missed the last reader requests, check them out here and here. And if you have any requests you'd like to see me cover in the future please let me know!

This week the deck I'll break down is the most family friendly deck in Modern: Soul Sisters. This deck is a snowball waiting to grow. It gets the name "Soul Sisters," from it's two namesake cards in Soul Warden and Soul's Attendant and is all about gaining life and growing your own creatures beyond where they started. Check out the decklist below to make sure we're on the same page.

Now that we know what we're trying to do we need to pick the commander for this adventure. Luckily there are some cool legendaries that care about gaining life. We got a brand new one with Vona, Butcher of Magan, who acts like a better legendary version of Blood Baron of Vizkopa. How is it better you ask? Well besides the Vigilance and Lifegain you have removal stapled onto your commander. I'd say that makes it a pretty effective commander.

Along the same lines of Vona you have a few other Orzhov commanders that take advantage of gaining life, such as Ayli, Eternal Pilgrim and Karlov of the Ghost Council. Both have their perks; Karlov of the Ghost Can be either a removal engine or quickly move into a very aggressive deck if you choose. I'm a fan of any of these options, I really couldn't fault you for choosing any of these. If you REALLY wanted to get creative you could find a way to work red into the deck. Doing that gives you some awesome potential cards that benefit from creatures entering the battlefield in the reverse way by damaging the opponent instead of gaining life for yourself. Purphoros, God of the Forge is one of the most played red cards in the entire format and specializes in just this. Red also gives you access to bad versions of what every other color can do though. There aren't many commanders out there that play into the lifegain rabbit hole we're heading down today. Bruse Tarl, Boorish Herder is the closest we can come to a commander with red that cares about gaining life. If you want some ideas on building him though, I'll send you over to Nate Burgess' article where he covered him in depth. No sense in me beating a horse than he clubbed better than I can.

Today though, I'm thinking about something different. With all of these Commander 2017 legendary creatures I want to rewind things a bit. Commanders with the Eminence ability are looking to be very popular, so I want to go with the OG Eminence creature. That's right, we're rocking Oloro, Ageless Ascetic. Now I know EXACTLY what you're thinking right now: "Oloro?!? More like "Bore-loro!" Hear me out. For a commander as popular as Oloro is (famously the most built deck until Atraxa, Praetors' Voice came along) shouldn't EDHREC have a few more than two (so far) articles on him? As the #4 most-built all-time commander, he still presents some interesting deckbuilding choices and fits perfectly for our transition to the 100-card format. Let's dig in.

We have established that we are a Soul Sisters deck. We are going to gain oodles of noodles of life, but we also need ways to win games. There are some ways that we can use our lifegain to our advantage beyond beating down with creatures too, which makes it even more fun. Aetherflux Reservoir is everyone's new favorite way to pay life since it came out in Kaladesh. And I do mean "everyone," in that statement, the artifact comes in at a crazy 8,500 decks which is behind only Panharmonicon and Inventors Fair for most played cards in the set. Most Oloro builds don't need the static lifegain ability from Aetherflux Reservoir, in this deck it largely acts as a bonus for incremental lifegain. Where it really shines is the closing power it provides when we pay our own 50 life. You don't have to go far down Oloro's EDHREC page to find out it's a popular addition to the deck, especially if you're checking out the "lifegain," themed decks. This just shows us that if you're in the business of gaining life in Commander, this is a shoe-in for you, and the numbers definitely back that up. Another typical Oloro staple I do have quite the affinity for isn't necessarily a "draw spell", but when you build decks with lots of 2-card synergy like I tend to do, it definitely helps to set up finding your synergy pieces. Lim-Dul's Vault may not put cards back into your hand, but being able to churn through your deck and set up several turns in advance is a CRAZY powerful effect. The fact that we are able to pay life, which Oloro decks seem to have in abundance, in order to spin the wheels again is pretty absurd. Lim-Dul's Vault being so cheap and instant speed make sure you're never sad to see it as well. Stacking your deck is insanely powerful, doing it almost anytime you want is even more powerfuler. The fact that of all the similar cards you could be playing in blue and black and Lim-Dul's Vault is only played in 6,732 decks as of today seems off. I'm not even a Dimir mage and I think more people should play it! One of my nominees for underrated staples

If you've been reading my work for EDHREC for a while, you'll know one card that got me excited the second I saw it is Crested Sunmare. This thing is everything I love about white EDH creatures and more. In the 60-card version of Soul Sisters you see them playing cards like Ajani's Pridemate or some type of creature that grows as you gain life, but this is my substitute for beater of choice. Going wide is a favorite past time of mine, so why would you not stampede your way through with an army of indestructible ponies!?

The card that REALLY piqued my interest when building this deck though was the Phyrexian's attempt to make a Soul Sister. Suture Priest is the card that makes the deck work twice as nice. While it doesn't get as much play as it's Soul Warden sister, the priest has a minor tweak to what happens when a creature enters the battlefield under an opponents control, causing the opponent to lose life instead of gaining ourselves life. If we are going punish the opponent for playing creatures, why not give them creatures?! *GASP!* Yes, let's give the opponents creatures. When you look at Suture Priest's EDHREC page, you'll notice that all the top played cards are black and white. Let's think a little gray here, and by gray, I mean in between white and black: blue! A few weeks ago Mason Brantley wrote an awesome article about Taigam, Ojutai Master(which you can check out here) and it reminded me of one of my favorite cards to pair with Suture Priest in Dovescape. Not only does Dovescape keep you from getting blown out (unless they have uncounterable threats/spells, which does happen) but it actively punishes people every time they cast a spell, Suture Priest effectively burns them for the converted mana cost of that spell. It's a pretty neat little 1-2 if you ask me. Is it brutal? Yes. Is it something you should play against everyone? Absolutely not. Locking people out of the game isn't the most friendly thing to do. This lock may end the game, but folks don't exactly like sitting around picking goobers while you don't win the game. The Suture Priest/Dovescape combo does at least help forward a gameplan of some sort, but don't be surprised if it doesn't go over well with your more casual playgroups. Tread lightly friends. But not too lightly

One thing you might notice absent from the list is the lack of other prison effects. Cards like Ghostly Prison and Propaganda get played at a pretty impressive 44% and 46% clip respectively. While most lists like discouraging other players from attacking by simply preventing them, I prefer to leave the door open up punish them for attacking instead. A couple cards that don't show up in the typical Oloro lists we see are Norn's Annex and No Mercy. Both discourage attackers from coming your way but instead use a resource that your opponents will always have in life and the creatures themselves. I love using Norn's Annex as a way for slower decks to work on opponent's life totals. In the same way No Mercy makes opponents choose carefully if they really want to attack us for the sake of attacking. We're not going to be THAT Oloro deck that plays some prison effects and Armageddon's the board(though that does sound sweet). Our deck is going to gain lots of life so we don't mind getting hit now and then, especially if they're getting punished for it. If you're going to build a prison, it may as well be Phyrexian quality

Now, for the finished product!

And there it is! A scintillating Soul Sisters stack. Let me know what essence of the deck I may have skipped over. Are there any flavors of the deck you like besides the typical mono-white or white/black versions?

As always, make sure to send suggestions on what decks you want me to cover next time. Otherwise you're at the mercy of whatever cool decks came out of the Magic Pro Tour! Thanks everyone!