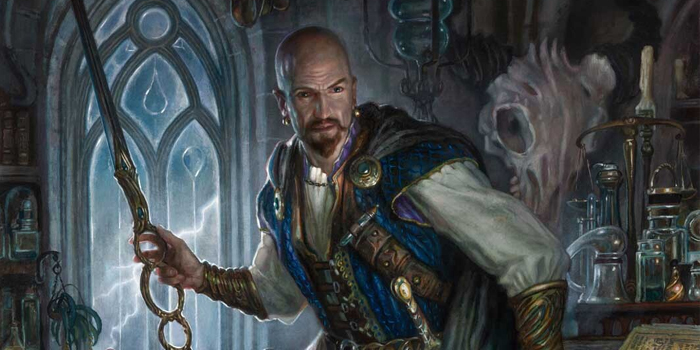 Welcome, fellow travelers! I'm Lenny Wooley, and I have been tasked with guiding you through the blue EDHREC set review for Adventures in the Forgotten Realms. I've got my component pouch filled and ready to showcase some of the best blue spells the realms have to offer. However, with only so many spell slots per day, I'm only discussing the ones I think will have an impact in the Commander format. Our initiative is held, our actions are readied, let's get to it.

Similar to Dreadhorde Arcanist, this card is yet another option for spellslinger decks to reuse their instants and sorceries. Having to attack to get that benefit is a downside, but that's offset by its recursion ability and cost reduction, and with a 4/3 body, you're likely to have an opponent you can take a swing at. It's a Wizard, so Inalla, Archmage Ritualist could run this and make a hasty copy when it enters the battlefield. I think the most likely home will be Tasigur, the Golden Fang, who tends to lean on instants and sorceries, and the Demilich can help sculpt his graveyard.

Iymrith offers quite a bit for five mana. A 5/5 flying body with solid protection and a card draw ability stapled on? Neat stuff. Dragon tribal or "flying tribal" decks will be happy to have this (although notably, only about a third of The Ur-Dragon decks are using a similar card, Dragonlord Ojutai). It works as the commander of a Voltron deck with counterspell/control backup, especially since Iymrith can keep the cards flowing, and Equipment that grants vigilance like Sword of Vengeance can keep Iymrith's ward up.

In fact, things get pretty funny with discard outlets, keeping your hand size low so you can keep drawing up to three cards if you want to rip through your deck. If you're lucky enough to have one, Mind Over Matter lets you discard as many as you want to tap down blockers or untap mana or whatever else you like. Unfortunately, it's hard not to compare this to Dragonlord Ojutai, which is practically the same card, only in more colors and arguably with better abilities. The flying decks may end up as its most frequent roost.

I honestly expected a bit more. The card draw ability is fine, but not something to go out of your way for, and while his ultimate ability is certainly powerful, he might not live to see it. The tokens that Mordenkainen can create have the potential to be quite large, so there are a few token-based commanders that could make use of this. Adrix and Nev, Twincasters will give you two of these tokens per activation, while Deekah, Fractal Theorist would be more than happy to go after opponents with a giant unblockable Dog. However, my favorite use for this card is Brudiclad, Telchor Engineer, who can do a lot of damage by turning all of its other tokens into good boys.

The Blackstaff of Waterdeep

Animating artifacts can be powerful, but this card doesn't do it on a scale that's useful in a multiplayer game. It falls short compared to cards like Rise and Shine, which can animate all of your artifacts at once, or Sydri, Galvanic Genius, who can do it multiple times. It could find a place in a Vehicles deck as an alternative to actually having to Crew stuff, but I'm not really sold on running this as opposed to running one more creature.

Flash is nice, and the casting cost is very good, but tapping something down for a turn isn't great. This doesn't even work as a surprise blocker. Dragon tribal has better options, but the handful of Turtle tribal players out there are going to be happy.

Grazilaxx could lead a deck that leans on cheap creatures with good ETBs. Creatures like Aether Adept and Amphin Mutineer can freely attack your opponents, leaving them to choose between taking damage and giving you a card or blocking and letting you recast the creature for the effect. Courtly Provocateur can force a creature to block if you want something back in hand.

Grazilaxx also fits right into the 99 of blue-inclusive aggro decks. It does a great job of letting you attack with impunity while potentially giving you a few cards. Anowon the Ruin Thief and Tetsuko Umezawa, Fugitive are great examples, and Yuriko, the Tiger's Shadow decks love the catch-22 this card presents: either allow the Ninjas to go unblocked, or else bounce them to hand, so they can immediately use Ninjutsu on a Triton Shorestalker to come right back out again!

Here we have a card quite similar to Sower of Temptation, only with higher mana cost and without flying or relevant creature types. Although Sower appears in 5,700+ decks, I don't think the appeal is quite as strong for the Flayer. Some of the most popular decks where Sower sees play are the decks that take advantage of its creature types, like Naban, Dean of Iteration, Oona, Queen of the Fae Faerie tribal, and Inalla, Archmage Ritualist. Flayer doesn't just lack the flying, it lacks the relevant card types. Most decks would rather spend more mana on an Agent of Treachery to keep the permanent, well, permanently, but hey, if you're building Horror tribal, you just got a great piece of on-theme creature removal.

While the exile-mill for a total mana value of 20 seems like a lot, it really doesn't amount to too many cards. If you're looking for a big mill effect to hit all opponents, Maddening Cacophony will usually get more cards. This may be a great call if your meta is overrun with lands decks, or those meme decks that run 97 lands and a two-card combo, but it's a pretty mill-specific card, and even those decks may waver on it.

This card has a lot of applications. It can permanently shift an innocuous token into the most powerful artifact or creature on the battlefield, or vice versa, and permanently shift a commander into something else, like a mana rock. Or, if you're particularly diabolical, you can turn that commander into a Darksteel Citadel or one of the other indestructible artifact lands we got from Modern Horizons 2. It's rare that a deck can take an indestructible land off the battlefield.

Mutate decks can also use True Polymorph like a Clone by turning something else into a copy of their Mutate stack. It also works as a combat trick by suddenly making two copies of a strong creature, or perhaps even 'saving' a creature from removal by making a duplicate out of something else.

Despite all it can do, though, I think it will see limited play due to its high mana cost.

Yet another card for spellslinger decks to get more mileage out of their instants and sorceries. This one lets you exile from your opponents' graveyards as well, so take a look if you routinely encounter spell-heavy decks. Seven mana is a lot, but this card has an incredibly high ceiling. It's possible to get something like a Time Stretch or Aminatou's Augury for one mana, and rolling a 20 with this thing will create some legendary game stories. This will go well in Commander decks that are able to trivialize the mana cost on the Book and are interested in casting huge haymaker spells; Saheeli the Gifted comes to mind for exactly this kind of deck.

Another consideration for Rogue tribal decks or the decks that want to attack with small unblockable creatures, though having to attack alone to get evasion isn't great in these kind of strategies. It makes a fine early play, getting you some early value by venturing into the dungeon a few times while you set up for larger swings. Snake tribal might end up happier about this card than Rogue tribal, to be honest.

Okay, I'll admit this isn't great, but if you have a blue deck with extra mana kicking around, and you want to try out the dungeon mechanic, give this a try. As a Wall, it fits into Arcades, the Strategist as a place to put extra mana if you happen to have a lot of it.

This design is so cool... but six mana is just too much to pay. If it was four, or even five, it would be a much more interesting contender, especially for spellslinger decks that naturally fill their graveyard, but at six, I don't think the juice is worth the squeeze.

The first two levels of this card are pretty mediocre, but I think level three is worth it for the right deck. We also can't ignore that Library of Leng shows up in nearly 7,000 decks, and Spellbook appears in about 9,000, so there's certainly demand for infinite hand size cards even outside of classics like Reliquary Tower and Thought Vessel. Blue tends to struggle with combat, and this can take something blue is good at (card draw), and use that to do more damage in the red zone. There are also a few available combos for those who reach the status of Level 3 Wizard. Curiosity, along with Triskelion or Walking Ballista, can let you draw your entire library and deal that much damage to anything!

Short and sweet! Raven is notable for low-to-the-ground decks like Edric, Spymaster of Trest and Yuriko, the Tiger's Shadow. The card Faerie Seer shows up in nearly 7,000 decks, and this will happily join it.

You Come to a River

Single-target bounce spells don't get much love in Commander, but they can be surprisingly useful, temporarily solving a problem or even saving your own stuff from removal. This one comes with the additional mode of making a creature unblockable. If you have a deck that's already running cards like Distortion Strike, or if you have a deck that's looking to hit with a single big creature, like, say, Toothy, Imaginary Friend, consider trying this card out.

You Find the Villains' Lair

While I don't normally get excited by Cancel variants, I think this one is a great option for commanders that are comfortable filling up their graveyard. Kess, Dissident Mage, The Mimeoplasm, Araumi of the Dead Tide, all great potential spots. I think Rielle, the Everwise would be especially happy to have a counterspell than she can also use to draw four cards. Octavia, Living Thesis loves both modes, too, and Kalamax, the Stormsire likes the protection and the card velocity. Even if you aren't running ways to get more value out of it, it's a counterspell you can essentially cycle to see two more cards. That's a fun place to be. Just make sure to practice your best villain laugh whenever you use the second mode.

Alas, we come to the end of our quest. Adventures in the Forgotten Realms is a love letter to Dungeons & Dragons. The flavor is on point and we got a bunch of cool new Commander cards that are going to make for epic moments! Tell me in the comments which spells you're most excited to put into your spellbook. Til next time!