Challenge the Stats - Ishkanah, from Grafwidow to Broodmother 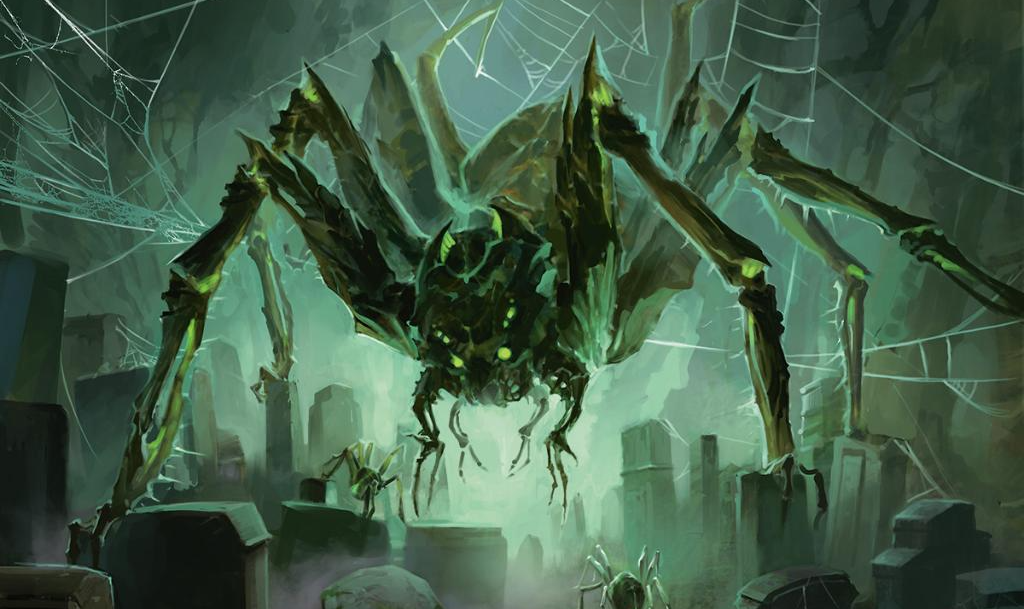 Honestly, I was inspired to build a Spider deck because of my dislike of them. I thought, perhaps, seeing Spiders all over my side of the battlefield would be some sort of desensitization therapy, but the more I thought about it, the more I realized Spiders are exactly my playstyle: fill the board with silly creatures and chill on defense while I sip on a Last Word cocktail and enjoy the company of my friends without having to think too much about board state, triggers, yada yada yada. And although it may be chill, this deck has legs. It can be explosive, with big swarms of Spider Spawning or Primal Surge to overwhelm the board!

There are a ton of derpy Spiders in Magic (65 to be exact), but Spiders aren't the most well-supported tribe. We have three legendary Spider options: Thantis, the Warweaver, Ishkanah, Grafwidow, and Arasta of the Endless Web. Ishkanah cares the most about Spiders, and Golgari colors are where the vast majority of Spiders reside. For those reasons, she's an obvious pick, but she's never been overly strong, especially in today's Commander games. That's absolutely okay! Low-powered EDH games are tons of fun. However, I chose Ishkanah because we recently got a digital-only version of her that is super cool. She's a bit awkward in paper and takes a Rule 0 conversation, but she's completely reasonable and a perfect excuse to use my new favorite GIF:

Therefore, I'm challenging the data from the current Ishkanah, Grafwidow, which can also be applied to this spicy new Spider legend! 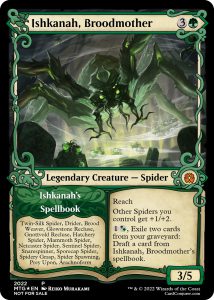 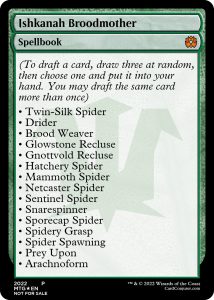 Check out these awesome alters by @imkyle on Twitter!

Ishkanah, Broodmother is well-costed at four mana, gives our Spiders an awesome anthem, and provides card draw in a very Spider-y way! She has a spellbook that we draft a card from when we exile two cards from our graveyard (rules). This is the tricky part in paper, but still completely doable. The spellbook is 15 predetermined cards that are all delightfully Spider-themed. We draft three random cards from those 15 and choose one to put in our hand. The cards in the spellbook replenish themselves, so we're able to hit the same card more than once. Luckily, they're all pennies, so we can pick up multiple copies to have on hand.

We're going to challenge the data from all 660 Ishkanah, Grafwidow decks at the time of writing, and you can see how often those cards are played in parentheses (%). Here we go.

This unique Elf Spider has made it into a vast majority of recently built Ishkanah decks, but I have issues with a few aspects of it. The first offender is the high mana cost. At five mana, I want a Spider that really impresses me, like Watcher in the Web. I also don't like the stat line; having higher power than toughness doesn't work with anthems like Ancient Lumberknot and Assault Formation. Finally, with no evasion and a combat damage trigger, we're not going to be making many 2/1 Spiders from that ability (who also have power/toughness reversed!). Tweaks in any of these areas might have made Drider playable, but as is, I'm leaving it in the maybeboard. It's in Ishkanah, Broodmother's spellbook, and I anticipate rarely drafting it. It's probably making the cut in so many decks because it was just released in Adventures in the Forgotten Realms, and new Ishkanah decks have the most recently released Spiders easily on hand in leftover draft piles.

Arachnus Spinner and Arachnus Web (67%) are super flavorful, but I wish they were better cards. An over-costed Spider that draws us a bad removal spell is not making the cut for me. Like I mentioned with Drider, Spiders at five mana or above really need to impress me. I'd rather play more three-mana-value-or-less Spiders that trigger Guardian Project and draw me more Spiders to keep that train rolling! In general, let's be critical of those high-mana-value Spiders. By all means, play high-mana-value spells, but let's make them splashy, not derpy.

This is an interesting inclusion. They count as both an artifact and a land, so they help towards hitting Ishkanah, Grafwidow's Delirium threshold. However, the cost is that they die to every Vandalblast, Austere Command, and Bane of Progress. Setting us back in this way isn't worth it in my book. If we're looking to double up on card types, enchantment creatures and artifact creatures are good options, and MDFCs with a spell on the front will help our lands count as other things in the graveyard as well.

Skull Prophet is a fantastic mana dork that helps us fuel our graveyard strategy. I like it in most Golgari graveyard decks, to be honest. The downside is it doesn't fix our colors since we need both to cast it, but I think the upside is worth that. If there's ever a turn we don't need the mana, we can tap the Prophet to mill ourselves for two cards. It's a relatively recent release from 2020, and often newer cards are missed or forgotten in older commanders that aren't updated frequently.

Masked Vandal is a recent tribal boon from Kaldheim. It's a fantastic Reclamation Sage variant that is cheaper to cast but requires we have a creature card in our graveyard. That requirement will be extremely easy to hit in our deck, so for us it's better than Rec Sage!

Speaking of tribal powerhouses from Kaldheim, Realmwalker could also use some more love in this deck (37%)!

Timeless Witness is a new take on Eternal Witness (24%). It's one more mana to cast, but it has an Eternalize ability we can activate from the graveyard. The Eternalize cost is 5GG, so it's certainly not cheap, but at least it isn't a dead card if we mill it into our graveyard. At only one more mana to cast than Eternal Witness, there's very little opportunity cost with that upside.

These are great in decks that mill themselves. I think a lot of people are worried about the blowout or these not working when our graveyard gets exiled. That will happen occasionally, but not often, and the mana rate on these is so good, I think it's worth it. Additionally, Spider decks are often budget-friendly, so the fact that these cards are less than a quarter and pack a punch is a win-win.

This is a new tribal mass reanimation spell from Kaldheim. It's a one-sided Patriarch's Bidding (11%) that we need to Foretell before we cast it to get all our Spiders back to the battlefield. This is fantastic after a board wipe or if we've been milling ourselves and have a stacked graveyard. Haunting Voyage is in over 7,000 decks so far on EHDREC, and I expect that number to go up.

Let me sneak in another double-reanimation spell I've been super impressed with. Incarnation Technique lets us reanimate two creatures if we Demonstrate it to let an opponent reanimate one too. It's performed really well every time I've seen it in games. Also, we get to mill ourselves for ten cards, which is extra-relevant in our deck!

This is no surprise for a tribal deck, but sometimes new slam-dunk cards have a hard time cracking their way into the EDHREC data, especially with commanders that aren't the most popular.

This is my Ishkanah, Broodmother deck. Again, stupendous alters from @imkyle on Twitter. You'll see the spellbook listed here as well. None of the spellbook cards are included in the deck itself. It would work just fine as an Ishkanah, Grafwidow deck, too, but I've chosen to lean heavily on creatures, so Delirium may not be turned on all the time. I wanted a heavy creature count to increase numbers for Spider Spawning and to help me swarm the board with cards like Lurking Predators and Primal Surge. The idea of these cards creating a Spider swarm is super flavorful for me and leans into a lot of synergies in the deck.

Also, look at these cool Spider tokens I found! 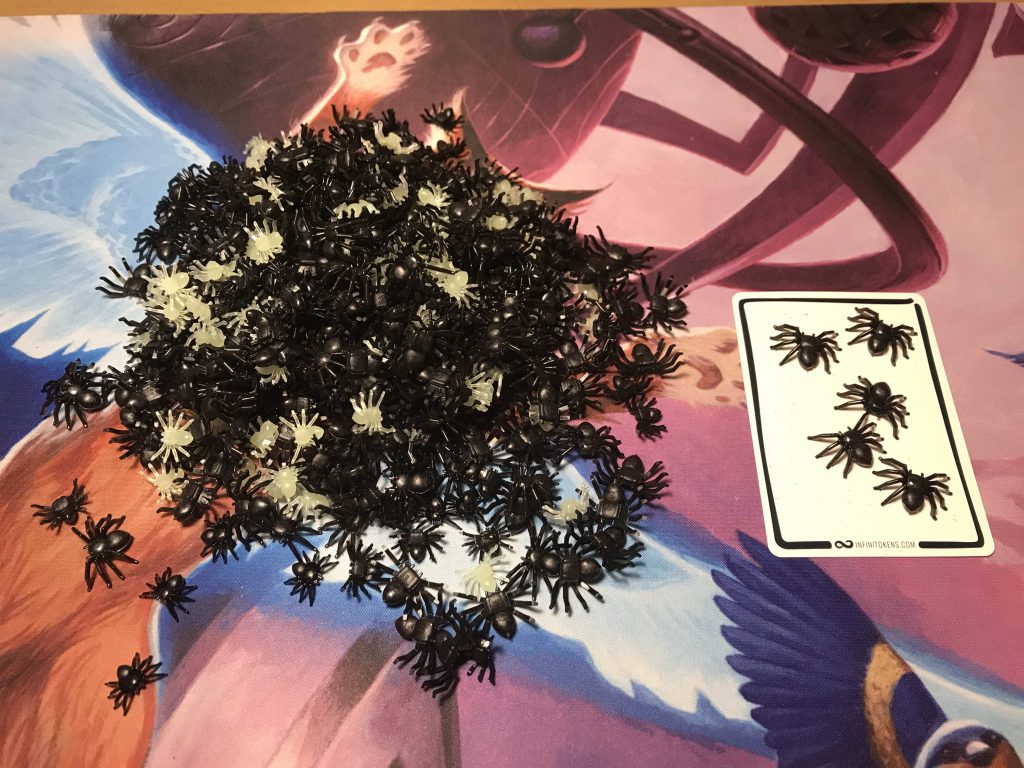