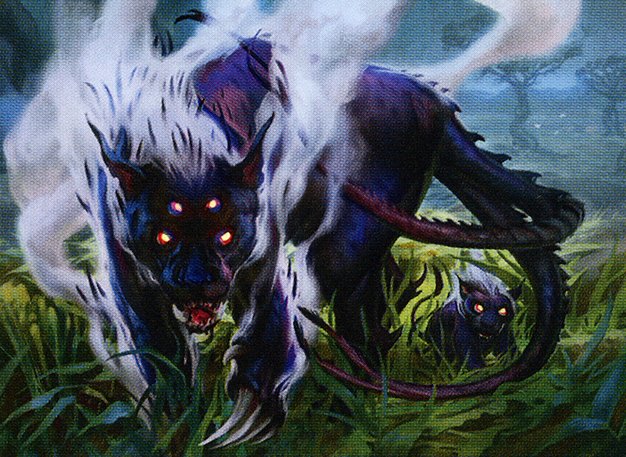 (Lurrus of the Dream-Den | Art by Slawomir Maniak)

Lurrus is a bit of an oddball to evaluate because it's a card that had an unprecedented impact in every format except EDH. Turns out a format that tends to go big doesn't appreciate having a CMC restriction. It's also a bit awkward to find a commander that meets this restriction, which leave us with a commander pool of just three, and let me tell you, none of them feel particularly good.

That being said, Lurrus' kit is a lot of fun to experiment; it works like a mini-"Muldrotha, the Gravetide", but the fact that we're stuck in Orzhov makes it a bit limited in what we can actually do with it. Being Orzhov with a recursive ability means that people will tend to go towards an Aristocrat build, but that can be a bit difficult because we lose most of the more powerful payoffs. In the end, regardless of where we put Lurrus, there'll always be this trend of lackluster payoffs, and this hurts Lurrus a lot.

Win conditions will be hard to come by, but we do have some powerful combos that are permanent-based and are easily tutorable, like Painter's Servant + Grindstone and Mindcrank + Bloodchief Ascension.

Ayli, Eternal Pilgrim is probably the best Lurrus commander since it's the only one that has any kind of direct synergy with it. That being said, the low CMC restriction makes it difficult to get value from the lifegain trigger.

Karlov of the Ghost Council doesn't have a direct synergy with Lurrus, but having readily available recursion for some of the lifegain pieces can help out a bit. The trend of losing the payoff is still in here and, like with Ayli, we have some support, but not enough pay off. We do have some support for Soul Sister effects. and this could lead to an interesting build.

One of the biggest problem when using Lurrus is that win conditions are hard to come by when they need to be less-than-three-mana permanents in Orzhov colors. However, what if I told you there's a two-mana creature that we can easily build our deck around that fulfills both requirements of being a win con and being under three CMC? Rat Colony is exactly that.

Rat Colony is one of the few ways to break the singleton in Commander. Unlike Relentless Rats, though, it's more flexible because its ability only cares about having Rats on the field. However, one of the biggest problems with Rat Colony is that, with only one toughness, they can very easily be traded with blockers, which makes it difficult to pressure our opponents while increasing our board. That pressures us to have a good evasion suite, and this is where Lurrus' restriction hits us pretty hard.

It's difficult to find permanent-based pieces that fulfill the requirement. Cover of Darkness is a great alternative: it's cheap, and intimidate can be close to true evasion in multiple decks. Piper of the Swarm is a powerful card that provides evasion and, in longer games, can give our Rats a boost by creating some tokens.

Commander choice is a bit lacking (to say the least), but out of all the possible legends, I do think that Livio, Oathsworn Sentinel has some potential as a support to Lurrus. In a format with plenty of powerful exile-based removal, having a way to protect Lurrus can be the difference between being able to grind out our opponents or not. Miara, Thorn of the Glade, our other Partner commander, is a bit lackluster in a deck without any other Elf creatures; however, when considering that we also have access to Lurrus, having a really bad Egg effect could help us to dig through some cards in a top-deck mode.

For consistency's sake, we're a running a cantrip suite that involves cheap artifacts that we can sacrifice to draw a card. They're great because we can combine them with Lurrus to set up a cheap draw engine. Don't expect them to be near as good as the usual blue cantrip suite, of course, but they do give us a way to keep going in the later portions of the game. They are also efficient to play on curve, since there'll be many turns where we'll have an odd amount of mana, and having these one-mana cantrips allows us to curve out more effectively while also allowing us to see more cards.

Lurrus is an important piece to our deck, so we need to supplement its recursion ability with some protection/redundancy of our own. Luckily for us, Orzhov offers plenty of great options for effective recursion sources. Call of the Death-Dweller is a great two-for-one for that. Sevinne's Reclamation is weaker on the front side, but it's a bit more flexible; however, when we get to flash it back, we get even more value. Animate Dead is less effective than the previous two spells, but we can target our opponents' creatures with it as well.

As I said before, our Rats are pretty weak to blockers, so one way to counter that would be giving evasion. Another way is to boost the toughness of our creatures to make it harder for creatures to trade. Tribal boosts like Shared Triumph are cheaper than the generic anthem effect, and this allow us to play them with Lurrus.

Having one or two extra mass reanimation spells could help us recover from those games where we can't establish a board. Rally the Ancestors is a neat way to give our Rats some out-of-nowhere potential.

Incorporating Miara into our curve could also be an interesting build-around. By having some sacrifice spells to target Miara, we could get a bit more value from our second commander and get access to some effects that we wouldn't have otherwise. I do think that they need to have a huge impact, like Diabolic Intent or even Village Rites, because otherwise they won't be worth the three extra mana that we need to attach to them.

Lurrus is a pretty underwhelming Companion, but that's more on the format than the card itself. That's a bit sad because its ability could have been a cool artifact-based Companion or even an aggressive one. It's also a bit of a let-down that it'll be hard to have new commanders (especially with extra colors) for it. That being said, Lurrus is a very fun card to play; its power is noticed, and it feels really good to grind out games with it.

That’s it for Collected Company! What do you think about this article? What are your thoughts on Lurrus of the Dream-Den? Share your opinions in the comments.