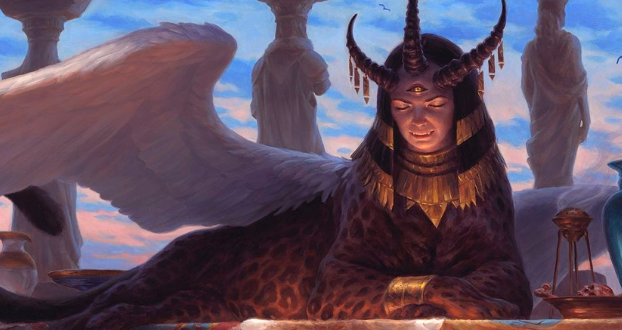 You might think she’s cute, flying around with an Octopus Umbra shouting “LOOK AT ME! I HAZ ELDRITCH TENTACLES! I AM EMRAKUL!” and you point and laugh because she’s pretending to be Emrakul. Then she attacks you and reveals the top card and behold, it’s Emrakul, the Promised End and you stop laughing, but only briefly, because she summons Emrakul for free and controls you during your next turn and orders you to start laughing again. LAUGH, HUMAN! HA HA HA.

Yennett, Cryptic Sovereign is a Sphinx with a few helpful combat keywords. With flying and menace, she won’t be blocked very often. With vigilance, she can attack without tapping. When she does attack, you get to look at the top card of your deck and maybe cast it for free if you built the deck “correctly”. That last part puts Yennett in a small exclusive club of commanders…

I have a Jeleva, Nephalia’s Scourge deck that I have refined over a few years. I have seen both Jeleva and Narset, Enlightened Master decks take more than four turns in a row on a regular basis. Recently, I’ve been working on an extended chaos version of Vaevictis Asmadi, the Dire. What all of these commanders have in common is the ability to get something from the top of their deck for free just by attacking. An easy start to a Yennett deck would be to look at the overlapping cards that these other commanders like to use. Yennett can borrow black/blue/colorless instants and sorceries from Jeleva, white/blue/colorless noncreatures from Narset, and black/colorless permanents from Vaevictis. Then we filter out the cards with even converted mana costs and see what we have left. This approach is a good start, but it is not going to cover everything that Yennett can do.

Yennett is able to cast many cards that the previously mentioned commanders can’t get for free. Instead of diving into the Big Mana theme pages, this time let’s look at some Scryfall searches. To start, we only want cards that are legal in the Commander format. Then we only want cards in the white, blue, black color identity. We also want to filter out cards with even converted mana costs. If we wanted to sound fancy, we could say we were applying a comb filter to the converted mana spectrum.

Paste that into the Scryfall field and search, then we want to click a couple more times at the top to make the cards sorted by CMC and Descending order so we see the big spells first. Or you could just click this sentence that links to where I already did all of that.

Looking over this list, there are some themes to keep in mind for future reference. We see a few respectable Eldrazi, an extra turn spell, some overcosted artifact creatures, and Hypnox (for which I have no explanation). There is also Polar Kraken, a terrible card that only the Sea Creatures theme page could love. Seriously, just knowing that Arixmethes, Slumbering Isle exists as a card makes Polar Kraken look even worse by comparison. Several of these cards in the high mana numbers are intentionally overcosted because they have inherent conditional discounts such as Affinity or Delve. We’re going to see more of each of these categories as we climb down the odd CMC notches. In fact, just to save some time, let’s knock out one of those categories right now.

Those are the cards with odd CMCs and ‘extra turn’ somewhere in their text. We can read that list and nod sagely to ourselves, safe in the knowledge that we don’t have to mention extra turns anymore in this article. Extending another category from the top suspects, while Emrakul, the Promised End and Expropriate could both be on this no-longer-mentioned list, they also both have the phrase ‘gain control’ in their text. Let’s get that category out of the way too, because I expect we’ll be seeing a bit of it in the near future of Yennett decks around the world.

Okay, now that we got all that out of the way, let’s see what is left at 9 converted mana cost. I’m going to omit a few cards that are over-costed and expect a discount (Affinity, Delve, Emerge), cards that are only up here because of strange CMC rules (Aftermath), or cards that only really work if they are cast from your hand (since Yennett is casting from your library). We could add that filtering to the Scryfall search with some parameters that subtract those specific words.

Again, we see a few good Eldrazi, a few bad sea creatures, and a few expensive artifacts. Yennett is perhaps the only commander that could effectively use Grozoth with a Scroll Rack to make a useful toolbox. Most of the sorceries on this list are already represented in Jeleva decks. I expect Skull Storm would show up on her page too, if anyone is still making new Jeleva decks now that Yennett is here. For new material, we are starting to see some Angels, Archons, and Demons. I’ll leave the CMC 7 browsing as an exercise for the reader, but those three tribes in particular (and yes, Eldrazi too) will have some more representation at that cost. But for now, hey, free Iona, Shield of Emeria. Sorry, green decks. No more green for you.

I already know what Jeleva and Narset can do. I’m also currently exploring what Vaevictis can do. In order to make something different from those commanders – and in the spirit of my articles where I use arbitrary self-imposed deck building restrictions just to prove a point – all of the higher CMC (5 or more) cards in this deck are cards that Jeleva, Narset, and Vaevictis can not already get for free from the top of their deck. Even though this deck can’t use all those familiar tricks, it is still disgusting.

Remember that Yennett has vigilance. She doesn’t need to tap to attack. Also, if we are casting spells for free from our topdeck, we don’t need to tap lands to cast spells. If we no longer need to tap anything, then why let anyone untap anything? Note that there are more stax-style enchantments in blue and white that I could have included to make it even worse, but didn’t just because Narset can already do that. But hey, if you do want to make it worse, then you can add that stuff to prevent everyone else from untapping while you go ahead and untap your own lands by casting Great Whale and Palinchron and Peregrine Drake for free.

I did not include any Eldrazi or Sheoldred, Whispering One or Sepulchral Primordial since they are already in Vaevictis decks, but of course they would be great here. I also did not include any of the one-mana tutors that put a card on top of your library, but they would be very useful. What percentage of Yennett games around the world will involve the phrase “before I attack, Mystical Tutor for Expropriate”? Finally, in keeping with my goofy deck-building rules, I’m not including any cards with an even CMC. I feel that even-CMC cards in a Yennett deck are similar to using off-color fetch lands, like a Windswept Heath in a Brago, King Eternal deck. Technically legal, but inelegant and tacky. Not that this deck will be aesthetically pleasing to play against. Anyway, enjoy!