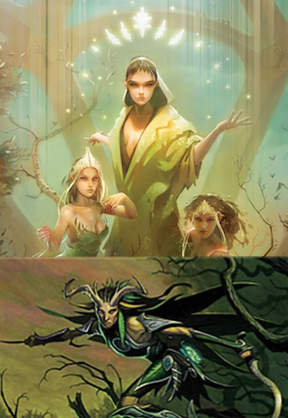 If you play enough EDH, you’ll see a lot of commanders with very similar abilities. This can make building a new deck confusing for both new and advanced players. Should a player interested in lifegain brew with Karlov of the Ghost Council or Oloro, Ageless Ascetic? If you like blink effects, should you choose Roon of the Hidden Realm or Brago, King Eternal? Even when you do pick a commander, how does its strategy and specific card choice differ from its near-parallel counterpart? EDHREC provides us with a lot of great data to help answer these questions. My goal with the Commander Showdown series is to use that data to compare and contrast similar commanders, with a focus on how their differences affect deck construction and how the masses of players build with those differences in mind.

For our first Showdown, we’ll take a look at two masters of token-based face-bashing: Trostani and Rhys can both be found at the helm of green-white token strategies. In fact, a lot of players use the two commanders interchangeably with the same deck. After all, both are GW and both have activated abilities that create tokens; however, there are key differences to consider during deck construction.

First, Trostani’s ability lets you populate, copying one of your creature tokens. Rhys’s ability lets you copy all of your creature tokens, doubling the size of your army. This is the first main difference we should keep an eye on. Since Rhys can copy a greater number of creatures, his deck will more effective at going wide with an army of small tokens. Trostani, on the other hand, will be more effective with a deck that goes tall, creating several large creatures rather than an army of 1/1s.

The second difference we should note is that Trostani has a crucial triggered ability: Whenever another creature enters the battlefield under your control, you gain life equal to that creature’s toughness. This consistent lifegain opens up a whole new avenue of deck construction that definitely isn’t accessible to Rhys.

Based on this information, what cards should we expect to see in the typical Trostani and Rhys decks?

If Rhys goes wide, Craterhoof Behemoth is a definite include. The Behemoth, Cathars’ Crusade, and Elesh Norn, Grand Cenobite do a pretty good job making that ‘wide’ army feel pretty darn tall, too. And since Rhys’s ability is so single-minded — just make more dudes — a Rhys deck should also be on the lookout for effects that keep his army from dying, such as Eldrazi Monument and Soul of New Phyrexia. A well-timed Wrath of God can really ruin Rhys’s day, so cards that keep his army alive are definitely needed in his deck.

From Trostani we should expect far fewer of these effects, since she’s less likely to build a vast army. Instead, she runs cards that create either enormous or unique creature tokens, since she’s more adept at making individual copies of them. Desolation Twin stands out as one example, as does Armada Wurm, and Mimic Vat is an absolute powerhouse for her. Mimic Vat is already a grossly underplayed card, but with Trostani populating the Vat’s tokens, it’s even better, especially since the tokens she populates don’t exile at the end of turn. There should also be a lot of other populate cards in her deck, like Sundering Growth and Rootborn Defenses, to make even more copies of those tokens. Finally, Trostani is likely to gain so much life during a game that Felidar Sovereign and Aetherflux Reservoir make a showing as alternate win conditions.

Ok, I presented my hypothesis, now let’s take a look at the data. Below I’ve made a Venn diagram (ish) of EDHREC's Top and Signature Cards for each deck, with overlapping cards in the center column. I put the cards in order of most-to-least-played. Let's take a look:

There’s a bit to unpack here. Let’s start with the “Both” column.

Unsurprisingly, there are common all-star cards like Doubling Season, Parallel Lives, and Hour of Reckoning. These cards don’t much care what the types of tokens being created, just the act of creation itself, so they’re natural fits. Aura Shards is such a powerful card that it’s a staple in just about any deck sporting Selesnyan colors.

Mirari’s Wake and Intangible Virtue are interesting cases. Their anthem effects appear to make them seem more at home in a Rhys deck and not in Trostani. But the mana-doubling from Mirari and the vigilance from the Virtue are powerful. Even if Trostani isn’t building an army, these effects are good enough to include anyway. Avenger of Zendikar is the same way; you don’t really want to populate a 0/1 plant token, but you do want to gain 15 life when the Avenger and his plant tokens hit the battlefield.

There are two additional anthem effects that I do take issue with in Trostani: Cathars’ Crusade and Collective Blessing. Maybe the Crusade is powerful enough to justify playing in Trostani even though she goes tall, not wide. But Collective Blessing? EDHREC indicates this card is played in 52% of all Trostani decks and only 34% of Rhys decks. That’s 306 Trostani decks and 178 for Rhys. This number should be the other way around! Another noteworthy revelation is that Trostani’s column contains three different ramp spells: Cultivate, Kodama’s Reach, and Selesnya Signet. Rhys’s column contains none of these. This clues us in about another subtle difference in gameplay for these two commanders. Rhys is pretty dependent on his army of tokens to win the game, so one of his most useful tactics will be speed; dead opponents can’t wipe the board. But Trostani is a deck that thrives in the late game, using its lifegain to outlast her opponents. To this end, ramping is pretty important in her deck. Plus, when recasting a Trostani costs twice as much mana as recasting a Rhys, you want to make sure you’re hitting those land drops.

Taking a look at Rhys’s column, I’m pretty pleased with the data we find here. Several of his most popular cards are anthem effects, as predicted, but there are several more that take advantage of his vast token armies too, such as Skullclamp, Shamanic Revelation, and Cryptolith Rite.

But there are also a couple that jump out at me that should be in the “Both” column: Oviya Pashiri, Sage Lifecrafter makes huge creatures in a Rhys deck, but she’s nothing to scoff at in a Trostani build. Trostani may have fewer creatures, but even making a 5/5 with Mrs. Pashiri can be a lot of fun to start populating. She’s a fairly new card, though, with only 98 new Trostani decks built after her printing, so maybe Trostani players have added her to their decks but just haven’t updated their TappedOut decklists yet.

The other one that stood out to me was Seedborn Muse. Everyone knows this card is insane, and in a Rhys deck, it’s no joke. Someone had better have a Hallowed Burial ready when a Rhys player gets the Muse out, or things will get real ugly real quick. But the Muse is great in Trostani, too. It may not help to quadruple your army like it does in Rhys, but it will untap Trostani to let you populate and gain even more life.

There are also some very important differences the Venn diagram shows us with regards to prices. Doubling Season is a Top Card in both decks, but if we look a bit closer, it’s found in 67% of Rhys decks, and only 41% of Trostani’s. Trostani herself shows up in Rhys’s column, but Rhys is only found in a third of Trostani decks. And while Swords to Plowshares shows up in our “Both” column, the much more expensive Path to Exile isn’t, appearing in Rhys’s Top Cards but only at 28% popularity for Trostani. Don’t let the numbers fool you. Path and Swords are great in both decks, so this percentage differential is an indication of budget, not effectiveness. A card like Collective Blessing is dirt-cheap, but it’s better in Rhys’s deck. A pricier card like Seedborn Muse is amazing in Rhys, but it’s bonkers in Trostani, too. You should definitely play within your budget, so don’t be too concerned about cards you can’t afford. Just make sure you’re aware of it when EDHREC suggests cards based on players’ wallets, rather than the actual most-synergistic cards.

Alright, to wrap up, let’s take a look at some of the cards that aren’t Top Cards for these two commanders, but absolutely should be. Angelic Accord is nuts with Trostani. Say you make a 5/5 Wurm token on your turn which gains you five life from Trostani. At the end of your turn, Angelic Accord triggers, and you get a 4/4 Angel and four more life. On the next player’s turn, you use Trostani to populate the Wurm and gain another five life, triggering the Accord again, giving you another Angel token and another four life on that player’s end step.

Storm Herd is also insane here. I harped a lot about how Trostani “goes tall, not wide,” but when you’re gaining as much life as she does? Yeah, that’s a lot of ponies. If you have her out when you resolve this, you even get to double your life total. (On that note, Ajani Goldmane is great too. Hitting the ultimate is tough, but if you do, it’s just dirty.)

Elemental Bond. Rhys gets to keep Mentor of the Meek all to himself, but Trostani gets to play this bad boy. If you play her right, you should be making multiple tokens with more than 3 power each turn. I don’t know why this isn’t in more decks.

Ezuri’s Predation. While Hour of Reckoning and Phyrexian Rebirth are definitely the most optimal board wipes for this deck, the Predation is just too good to pass up, especially when you’re facing off against an enemy Rhys deck. Even if you lose some of the Beast tokens, the amount of life you’ll gain off this card with Trostani in play is bananas.

Finally, I need to plug Mimic Vat again. Play. This. Card. And while I’m at it, Phyrexian Processor. It’s already one of her Signature Cards, but it’s only in 45% of decks. It should be in 100% of them. Even if you’re stingy and only want to risk paying 10 life, you get that life back! These two artifacts are more important than Parallel Lives in this deck, I guarantee it. Champion of Lambholt. Who wants an unblockable army of elves that doubles in size each turn? I certainly do.

Aura Mutation. How is this only in 11% of Rhys decks!? Unless your Aura Shards is already consistently destroying every possible enchantment out there, you should be running this.

Glare of Subdual. In this deck, this card reads, “Creatures your opponents control without shroud or hexproof can’t attack or block.”

Soul of New Phyrexia. I was apparently way off on my prediction with this card, because it doesn’t show up on Rhys’s page at all. I still think it’s a winner, though. Protecting that army is important, and if you have the mana for Rhys’s ability, you’ll have the mana for this too, just in case.

That's All for Now

If you’re deciding between two similar-looking commanders, take a careful look at which cards overlap, and especially which cards don’t. EDHREC gives us a lot of data about what people are building, but it’s important to analyze that data and review it before taking the most popular cards and shoving them into a deck. EDHREC is a great tool for finding new ideas along similar deck archetypes.