Do Your Worst - Izzet Lifegain

Lifegain in the Fast Lane

Hello everyone! Welcome to the third installment of Do Your Worst, where we take a popular archetype and find the most unusual home for it! I'm your host, Philomène, and in this column, we will be looking at decks that should not be – or should they?

I was not surprised when I looked at the EDHREC Themes Page and found that lifegain strategies are the second most played archetype, right behind artifacts. Sitting behind a safe and comfortable life total, activating tons of triggers, assembling powerful game-ending combos and, best of all, "using life as a resource" - what's not to love?

If we analyze the archetype further, we see pretty clearly that white and black are almost always involved in this strategy, with green never that far away. When we think of lifegain, we think Heliod, Sun-Crowned, Liesa, Shroud of Dusk, or Lathiel, the Bounteous Dawn. In this column, we try to shine the light on the lesser-played colors of a certain style. So, what happens if we try to bring the gaining of life to blue and red? Can we make an Izzet lifegain deck? What would that look like? I'm anxious to find out!

As always, let's begin by trying to find a commander that can put us on the right track. Sadly, only Ludevic, Necro-Alchemist contains "life" in its text, and it doesn't really suggest anything having to do with lifegain. Let's set him aside for now. We have to thin hard here - how do we actually gain life in Izzet? How do we use it? Do we have payoffs? Time for a Scryfall search.

Hm. Based on those results, we see that red is particularly good at preventing other players from gaining life, with cards like Sulfuric Vortex, Rampaging Ferocidon, and Tibalt, Rakish Instigator. Meanwhile, blue is almost entirely absent from our search. Looks like this archetype is far from supported in these colors. Perfect! This means we're in the right place!

This means we'll rely heavily on colorless cards to gain us life. Aetherflux Reservoir resonates with Izzet's usual modus operandi, rewarding us for casting lots of spells. Witch's Clinic can give lifelink to our commander, as do a number of Equipment. Wait, that's it! What if we found a commander that can dish out some damage pretty regularly, and give it lifelink so that we gain absurd amounts of life whenever it hits?

Let's see: the Niv-Mizzets are interesting, although their mana value is quite high. Our commander will be an essential part of our strategy, so we want to cast it early and not get too punished by commander tax if it does get removed. Keranos, God of Storms can dish out some hurt, but we would have to lean on the Devotion pretty hard for him to stay a creature; we can't attach Equipment to enchantments!

After much deliberation, I think our best bet is to go with Tibor and Lumia.

This lovely couple lets us control the board with each spell we cast, and gains us life along the way, as long as they're equipped with the right tools. Give them deathtouch and they get really nasty. Of course, we've got a few hoops to jump through, like giving our things flying, but who's afraid of that? We love jumping through hoops! We can use Archetype of Imagination and Levitation as permanent flying effects so we don't have to worry about hurting our own stuff. Casting multicolored spells also seems like a good idea, because we can simultaneously trigger both halves of T&L's text.

I think we're on to something! Let's get brewing.

No Pain, No Lifegain

Let's try to capitalize on the damage we can deal with our commander. Basilisk Collar is very dangerous, as we only need to cast a single red spell to wipe the board. This is tricky, though: our creatures must have flying or you'll wipe them too, so remember to sequence the spells correctly! Shadowspear and Loxodon Warhammer also provide lifelink when attached to our commander. We don't have that many creatures to bring back with Sword of Light and Shadow, but the protection and the lifegain is enough to warrant its inclusion.

I think it's then sensible to sprinkle in some creatures that will benefit from being Equipped with such tools, in case our commander is unavailable (curse you, Imprisoned in the Moon!). Guttersnipe comes to mind, and Spear Spewer makes the cut as well. My favorite, though, is Heartless Hidetsugu. Oh, you read it right. Hidetsugu itself deals the damage, so equip him with Loxodon Warhammer and revel in your opponents' despair. Yay!

With the Equipment taken care of, we can explore some, shall I say, more unknown parts of the lifegain engine. We'll be killing a lot of creatures, so Profane Memento looks solid here. It also protects you from that pesky Syr Konrad, the Grim player in your pod. Dragon's Claw and Kraken's Eye are not exactly what you'd call efficient, but they do the job and will trigger on opponents' spells too. Tablet of the Guilds offers a similar effect, but for our spells only.

Now onto some hidden gems. If green shows up consistently at your table, it might be worth it to play Lifetap. It's super narrow, I know, but we'll take all the life we can get. Illusions of Grandeur is pure jank, even more so because we only have one way of giving it to an opponent: Role Reversal. Still, let's say we have Aetherflux Reservoir out, and we could play Illusions of Grandeur to gain that little bit of life to Death-Star-beam our last opponent. Corner case, and risky, but what's life without a bit of spice?

What Am I Doing With My Life?

How do we use our precious resource? In white, payoffs like Felidar Sovereign abound. In black, paying life for a variety of effects can be really strong (looking at you, Bolas's Citadel). Well, we have no Archangel of Thune in our colors, but it turns out that red can pay life for a few things. Mages' Contest is pretty funny and can lead to legitimately hard decisions for our opponents. Illicit Auction is another bidding card, and if they don't want to pay, it's a Control Magic for five mana. Not too bad! If they really want to hang on to their creature, we can make them pay with their sweet life. Mwahahaha! *Ahem* Moving on.

You know what's powerful? Paying life for mana. Treasonous Ogre lets us do that, and that's broken. It's nice to have a little bit of power amidst our jank sometimes! Playing Phyrexian Processor for 40 life is always fun. Plus, we can give the Minion token lifelink! I swear that this card has never backfired in the entire history of Magic. Yup, promise. Don't let my dreams be memes, people. Next, Wheel of Misfortune is a cool card if you can figure out what it does. I'm joking, I totally know what this card does. You pay life and you draw cards, and... stuff. And sometimes not. Whatever. Next section!

The Facts of Lifegain

Like every balanced and sensible deck, which this is not, we should try and include at least a reasonable amount of ramp, card advantage, and interaction.

Ramp and mana. Treasonous Ogre, as we discussed above, will be very valuable. I know three-mana rocks are not so hot right now, but Pristine Talisman is synergistic, so there. The Celestus is actually pretty interesting, since we can filter our hand a little bit and gain some life while doing it. Impressive! I'm not gonna talk about Sol Ring and Izzet Signet and the other five generic mana rocks that go in this deck, but they're here too.

Card advantage. Our commander is all about casting spells, so we need spells in our hand. Shocking, I know. Jeska's Will is a good card, but you knew that already. Expressive Iteration is a solid little spell, a two-mana draw two a lot of the time. Since we'll be cantripping a bunch, Jori En, Ruin Diver will reliably draw us a card each turn. Speaking of cantrips, Preordain, Brainstorm, and Ponder are all in here. For looters, we have Faithless Looting and Frantic Search. Steam Augury is a reverse Fact or Fiction where you separate the piles for once! Kraum, Ludevic's Opus might seem odd here, but it's a nice flying body that doesn't get affected by our commander's shenanigans, and it's multicolored. Its drawing ability triggers a respectable amount of the time, too. Most importantly, Alhammarret's Archive is an auto-include for our lifegain and our draw, because wow that card does things.

Interaction. We're already interacting with the board a lot with Tibor and Lumia, but we have some other ways to foil our opponents' plans. Izzet Charm is a modal spell that's useful in a lot of situations, and the same goes for Prismari Command. Electrolyze will take care of a value creature or two, and will cantrip while doing so. With Role Reversal, we can possibly give our favorite opponent Illusions of Grandeur and take their best enchantment, or exchange our puny Island for a Maze of Ith - the possibilities are endless! Mass Diminish and Polymorphist's Jest can wipe a foe's board, provided we play a red spell afterwards. Chandra's Ignition can gain us huge amounts of life if our commander's equipped with Shadowspear. We also run Counterflux and Ionize, two multicolored counterspells.

Just a thought on protecting our commander: we want to avoid Shroud as much as possible, because we won't be able to target Tibor and Lumia to give them flying with their ability. For this reason, we should go with Swiftfoot Boots and Mirror Shield instead of Lightning Greaves.

Tutors. Look, our strategy is kind of fragile, and it relies on us having at least one way to give lifelink to our commander, so we're running Trinket Mage and Trophy Mage to fish for our precious Equipment. We don't really want to tutor for Tablet of the Guilds, Kraken's Eye, or Dragon's Claw, so we exclude Tribute Mage. It's so sad to split these triplets up, but here we are. We put in Fabricate instead.

Now let's see the deck in its entirety:

See You in Another Life(gain Deck)!

Wow, this is the first time that I feared we might not actually get there. But we kind of did? How exhilarating! The deck actually gains life and does something with it. I call that a win. Sure, sequencing is tricky, fatal errors with deathtouch will be made, and it's kind of a glass cannon, but the deck does the thing. Nice.

Beauty tips. It's always neat to have some lands that fit the flavor of the deck, Izzet'it? Did you know that Tibor and Lumia is actually one of the first Izzet legendary creatures? The Izzet League first appeared in Guildpact in 2006, and before that, there were some multicolored blue/red cards, but none of them were legendary. We can celebrate our love of Izzet with these nice Guilds of Ravnica Guild Kits basic lands. 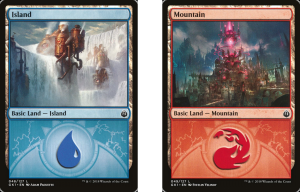 How would you build an Izzet lifegain deck? Is there some obvious card that I missed? Maybe you would have gone with one of the Niv-Mizzets instead of Tibor and Lumia? Let me know in the comments! I’m Philomène, and this has been Do Your Worst. See you next time!

I want to thank my brother Mathieu Gatien, who pointed me in the direction of Tibor and Lumia for this archetype.