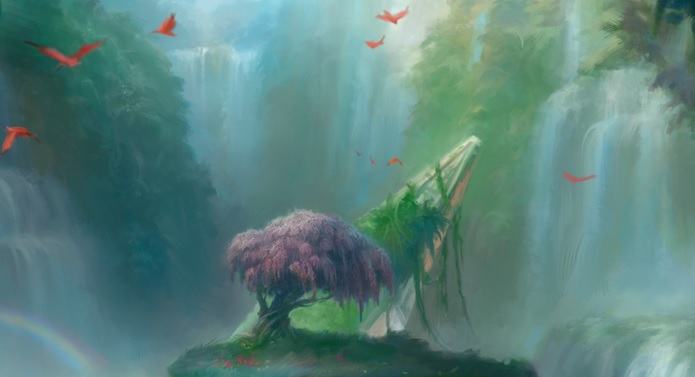 We find ourselves in a strange place... but wait, don't we always? Aren't these decks always a little weird? Well, this one is deep within the Ikorian wetlands, where an undying and deeply uncanny spirit of the Zagoth rainforest watches over the cycles of nature, ruling the circle of life and death in a metaphorical way, but in an aggressively literal way, too.

Welcome to Dual Shot, where we brew two decks at the same time... in one deck. For this experiment, we'll be squishing a token deck and an Infect deck together. The inspiration for this mishmash befitting of our towering Nightmare Beast Elemental, the broccoli king himself, comes from a conversation I had with a kindly gentleman on MTGO who may or may not have been Lazav.

My mysterious opponent presented a deck in which Brokkos, Apex of Forever, lumbering, gentle, and unassuming, not unlike the friendly Colossal Dreadmaw of the wilds of Ixalan, would laze about in the distant solitude of the command zone, until all of a sudden, everyone forgot that Blighted Agent was a Human and therefore was not a legal Mutate target.

All this to say that there is definitely room for some surprising (and recursive) plays with Brokkos, and plenty of targets that make for some explosive early game power moves. As with most Infect decks, knocking one opponent out early by throwing poison counters at them will paint a bright and shiny target on your face for the rest of the table to focus on. Fortunately, in true Dual Shot fashion, this deck is somewhat misleading, and Infect operates as a subtheme that you can withhold until you're ready to bring out the Brokkos.

In addition to the mobile AeroGarden that is our commander, Ikoria also introduced a bunch of other things with Mutate, and it's kind of its own thing now. And if you've taken a look at the Infect theme page recently, you'd notice that Mutate has found something of a new home there. It makes sense - play something easy to cast like Plague Myr, Flensermite, or Necropede, then irradiate it with the strange energy of another, often bigger creature, and wind up with a much scarier Infect threat.

Brokkos lets you do this reliably. Mutate the living grove onto something, and when the mutated stack of limbs and veggies gets removed, let your commander go to the graveyard, from which you can Mutate again. If your graveyard gets submerged in the Bojuka Bog, that transition between zones (yard to exile) allows you to place Brokkos back into command. See? Circle of life, or something. But beware, things like Grafdigger's Cage will trap your general, making it more like Brokkos, Apex of a Little While. To that end, we'll be including a toolbox to try and deal with such effects.

So Mutate and Infect go together like peanut butter and jelly, if, uh, the peanut butter was dangerously radioactive and the jelly was a disease vector. But why tokens? Well, the bridge isn't very wide here, but there are three cards that seem to want this to happen: Carrion Call, Phyrexian Swarmlord, and Trigon of Infestation. As there are a few Proliferate effects in this list, remember that counters of any kind can be targeted along with a player's poison counters. These Insects are all viable candidates for mutation as well, providing extra spice for the synergy soup.

(Do not drink the soup.)

Since all of the token generation will be of interest to your commander, and your commander is really just a Colossal Dreadmaw that ate too many chia seeds, there should be lanes for Voltron or Bogles strategies (giving Brokkos hexproof, indestructible, Infect, and greater power, all in addition to trample) alongside what is likely to be your more visible approach - a wide and aggressive game plan. Without a white color identity, it's difficult to fully commit to a wider tactic, but like any Dual Shot deck, commitment is poison. With any luck, this list will prove to be poisonous even without a narrower focus.

Conclusion (Even Though Nothing Ever Ends)

So there are a lot of little avenues here that require a good deal of attention. It might be worth it to wait on Aether Hub's rainbow mana until you can hit the stack with Fuel for the Cause, Proliferating the energy counter for you along with whatever +1/+1 or poison counters you may have accrued. To this end, Karn's Bastion was an obvious inclusion, although colored mana sources can be a little tricky. Luckily, Circuitous Route can grab any of a number of Gates for you. Since Brokkos and several other of the deck's strategies are expensive, there's a fairly typical ramp package, one that might even be a little overboard. But the Keyrunes make for a fun inclusion, although there are some Mutate rules wonkiness to be aware of. Mind the verticality of the mutation. If your unblockable Dimir Keyrune Horror creature is on top, whatever is mutated below it would stop being a creature at the end of the turn, I think, don't quote me on this, oh my God I've gone crosseyed.

Mostly you'll be looking to make lots of Beast tokens, Thopter tokens, Insect tokens, and the occasional Whale token. Not only does your token strategy become a huge threat with Second Harvest, but these are all Mutate targets as well. Of course, there are some more obvious candidates for mutation, like Nightveil Predator, Darksteel Myr, and Polukranos, Unchained, but sometimes just mutating Brokkos, Apex of Forever onto a 1/1 Insect token with Infect will be enough.

Tainted Strike and Phyresis can make for good inclusions, improving consistency at the cost of sometimes being dangerously redundant. Triumph of the Hordes can be redundant as well, but with the number of tokens you create that don't have Infect, this is still likely to be a reliable win condition for you, as it would be in nearly any combat-centric deck. Desecrated Tomb seems interesting, and might be worth playing with for Brokkos' sake. As well, the +1/+1 counters from The Great Henge aim to make the card a strong addition as Proliferate targets, even though the Henge specifies nontoken for those counters. Probably because it also draws you a card, so it's hard to complain. Lastly, more obviously powerful Populate/Proliferate effects like Doubling Season are great options for cards to slot into this list.

As always, this brew is a fun (I hope) concoction that needs more removal (I'm certain), but still manages to feel interactive at the table and requires some engaging piloting decisions. Although cards like Triumph of the Hordes make for a flexible win condition in many decks (without exactly classifying that brew as thematically Infect-oriented), themes like tokens or poison seem to generally require a good deal of focus to do much of anything, or to do it efficiently, at least.

Tell us in the comments if you've found a way to take a go-wide token strategy and had to sacrifice a bit of focus for the sake of doing something different. I know we all strive for what we think of as focused decks, but many tables also recoil at the concept of playing Magic as a game of solitaire. In a sporting match, a hyperfocused awareness can easily blind your periphery, your ability to react, to adapt, and to flow. Even Brokkos isn't unchanging - perhaps eternity, like anything else, is as mutable as the strange places it contains.

That's it for this week. See you all soon! Stay sane and keep to your crafts if you can, and above all, stay safe.