Dual Shot - An Amphitheatre of Trees 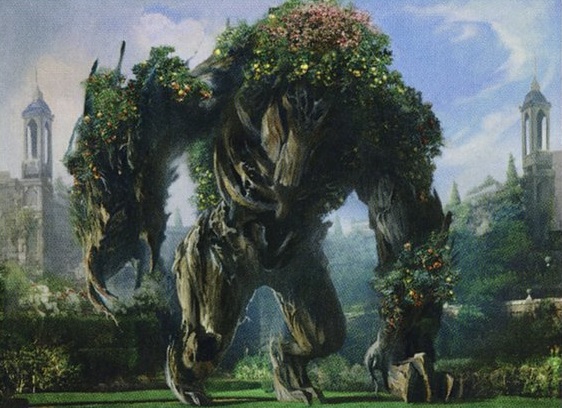 We find ourselves in the strangest place of all - the sort of place where the paradoxical is true, where the antipodes of the mundane and the extraordinary begin to blur together. The polarity only ever arose from dimmed perspectives and dulled perception.

We're not in some Escheresque interstellar nightmare, nor do we inhabit any psychedelic phantasmagoria. But there is something menacing here, something as threatening as it is inviting. The eldritchness lay here, but it's distant. Distant enough to let curiosity and even serenity overtake caution, at least for a while.

We are in the forest.

The woods, the wilds... from the silence of morning comes the nascent crackling of life: waking birds stir the moss, the meadow rustles, and pollen shakes from the creaking limbs above.

Fittingly, that cosmic joke wreathes this experiment, making scarcely scrutable commentary from above in the meta-balconies. This is Dual Shot, that strangest of experiments. So, it shouldn't come as much surprise at this point.

But this one seemed a bit heavier on the irony. This time, we'll be brewing Druid tribal with a political subtheme. For a mono-green list with Seton, Krosan Protector in charge, the price of politics seems like it might be too steep for humble naturalists. And yet even those who shelter in the trees - ascetics, neutralists, and primitivists all - must sometimes take to the moot and parley with the world. The trees will be their halls, echoing their arguments.

Druids Probably Aren't As Chill As They Let On, Anyway

There's plenty opportunity for politics to turn into Group Hug here, but you'll more likely be playing favorites early. So, much like real politics, you'll be yelling at your debate partners with your fingers stuck in your ears. And just in case your opponents don't feel like playing the game of thrones, most of your political pieces - things like Sylvan Offering, Early Harvest, and various Fog effects - will work just fine without consent. Rather oppositely, things like Stream of Life, Primal Command, or even Gaea's Blessing, in some specific situations, could be retooled as gifts for your opponents for the sake of a temporary truce.

The canopy to all that is Druid tribal, here taking shape as a wide, aggressive shell. None too stompy, either; most of of your threats are unassuming mana-generators (on their own or thanks to Seton) until an endgame Overwhelming Stampede, or, if you're lucky, a Sylvan Advocate and a Sylvan Awakening. Really, with pieces like Orochi Hatchery, Hydra Broodmaster, Nut Collector, and Baru, Fist of Krosa, this looks rather more like "green creature tribal," but druidic vows are nothing if not inclusive.

You'll notice that there's something else going on here. Behind the tangled foreground of trees, some part of you remembers the wider world, even if it's obscured by the forests of proximity. There is truth in nature, but not necessarily honesty.

There is a political subtheme here - if you choose to pilot the list that way - but there is a more immediately visible companion theme of lands. And what better ulterior motive for the druidic enclave to pursue than the tending of the earth? Seer's Sundial is an obvious starting point. Yavimaya Elder and Skyshroud Claim are more than just ramp pieces: with untap effects from Elder Druid, Arbor Elf, Voyaging Satyr, and the like, your mana can quickly become weaponized. Primal Bellow and Rude Awakening demonstrate both sides of this tactic: respectively, going tall into the trees, or going wide into the understory. And your aggressive pieces are largely multitaskers as long as Seton is out, save for a few stompy creatures like Grunn, the Lonely King for when setup is proving difficult. Some components that flesh out all these strategies might look like Wilderness Reclamation, Avoid Fate, or Tempt with Discovery.

Dual Shot has tinkered with tertiary themes in the past, incidentally or otherwise, but they were generally as close to quiet as they could be without being inconsequential. Here, three themes play in near balance. The watchers and hecklers in the balcony toss their crumpled literary criticism papers and burning copies of House of Leaves down onto the stage, hoping that the tomatoes of irony strike true. Somewhere, someone rolls a true neutral D&D character, and regret ripples along the strings of the augurs of fate.

Before things get too pompous, just know that leaning into any of the themes is plenty viable. To make things more political, consider Skullwinder, Hunted Troll, and Selvala's Stampede. For Druids, adding some more general tribal tools like Crown of Vigor, Vanquisher's Banner, or Brass Herald is a very feasible approach. And for the lands theme, Rampaging Baloths and Avenger of Zendikar can prove to be devastating win conditions, enjoying solid synergy with Baru, Fist of Krosa.

That's it for this episode of Thoughtweft Trio. Be sure to tell us below about the decks you've built that tried to do a little bit too much. Were they masterful jacks of all? Or did your opening hands too often look like the contents of a booster pack? Until next we meet!