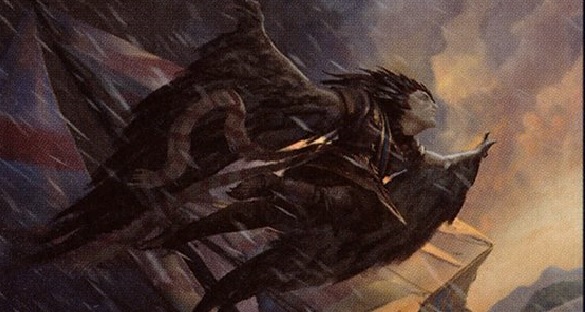 We find ourselves in a similar place. A space we remember. We’re inhabiting the same room as before – the experiment hasn’t destroyed any furniture, didn’t even scorch the upholstery. Maybe there’s comfort here. Consistency.

We find ourselves in the latest episode of Dual Shot, where we brew two decks at the same time... in one deck. This time, we’ll be hiding a counterspell deck inside an aggressive flyers deck, with Shu Yun, the Silent Tempest at the helm.

Or maybe it’s an aggressive flyers deck inside of a counterspell deck.

In the debut Dual Shot brew, I explored how an 80/20 balance was a good baseline for incorporating a subtheme. Too much of the backup plan, and you lower the odds of drawing into your primary strategy. Too little support for the backup, and it’s less likely to be relevant or game-changing.

So, naturally, this time we’ll be discarding that philosophy. Temperance and restraint don’t play well with eagerness and ambition.

Except when they do.

The thing is, aggro playstyles and controlling strategies don’t have to be at odds. In fact, they never really were in the first place. We tend to look at those approaches as antithetical, as if they occupy opposite ends of a spectrum. An aggressive deck fills the board or burns, going wide or tall or both, looking to end games with early, overwhelming damage. A control deck attacks the stack, or else interacts with the board by removing pieces or stalling. Then, sometimes, a big goofy dinosaur shows up and chomps somebody.

Okay, so strategies that prioritize the lategame aren’t the same as aggro brews just because someone ends up getting bitten by a plesiosaur. Besides, that’s not even what Nezahal is good at.

This game isn’t reducible to rock paper scissors (or scissors paper stone, or quartz parchment shears, whatever) for innumerable reasons. A low-to-the-ground aggressive deck doesn’t automatically beat a hard control deck just because there aren’t many high-value removal targets. And a control deck doesn’t necessarily secure victory by eliminating the few big threats that a more midrange offense might field.

You can’t fully prepare to face everything, although all of us (save for the most myopic of combo players, like myself) can try our best to do so. Understanding trends, knowing historical patterns, reading your opponents, and having catchall answers – these are the ways to optimize your builds, and to secure better lines of play.

That’s not really what we’re doing though.

At its core, this is a series about brewing with subthemes. By incorporating a secondary chunk into your deck, you can pivot to an alternate strategy, ideally one that doesn’t detract from your main goal, and perhaps even serves to confuse your opponents by muddling your intentions.

In a serendipitous brew befitting of Shu Yun’s meditative prowess, it turns out that the two approaches here don’t step on each other’s toes at all.

Aggression, combinations, control. Early game, midgame, lategame. Removal, setup, stalling. Sometimes a winning strategy isn’t weighted entirely upon one approach, but an ability to change lanes; to adapt, improvise, and flow. Sometimes you wind up with a sort of tactical hybridization, like the aggro-control archetype, famously exemplified in Legacy with Counter-Sliver, where you go (mostly) all out early, and rely on tempo disruption for the later game to protect your aggressing line.

This is all too philosophical for me. Let’s just make some birds.

No, not yet, we need to stall.

A stall in fluid dynamics occurs when the angle of attack breaches a certain point, dependent on the system in question; thenceforth, a loss in lift occurs.

A stall in a strategic matchup is a condition that is reached when parties stop enacting decisions. They can still think about lines of play, but nothing is really happening. This can happen with or without intent. In combat sports, some people see a clinch and view that as a stall position. There are limitless lines of play from there, and while it can be a stalling point for tired fighters, it’s also often a staging ground.

Shu Yun was a khan of the Jeskai Way and a warrior monk (although not a Warrior in his typeline, bad show - even when retired to a teacher, a fighter is a fighter). Combat sports might seem a strange aside to some EDH players, but the overlap in jargon is surprisingly rich. Much of that terminology – control, answer, mirror match, endgame – originate with the game of chess. A game that symbolizes battle.

The dynamism comes in when it’s time to switch approaches. Either to abandon an unsuccessful line of attack, or to fluster an opponent with an unexpected pivot; a feint into a new gambit.

And the funny thing about stalling in EDH... is counterspells.

About 30% of this deck is focused on counterspells and their interactions. Lullmage Mentor makes chump blockers when we successfully counter something. They're non-flyers, but they can learn the art of flight from Archetype of Imagination. It’ll also be a source of counter control itself if we’re lucky (and hey, Talrand, Sky Summoner’s a Merfolk too). Guile is a threat that basically steals opponents’ spells. Baral, Chief of Compliance makes counterspells easier and helps to smooth out our hand.

Roughly 40% of Shu Yun’s library is in the theme of flight – evasive, aggressive attackers. There are five lands (Inkmoth Nexus, Blinkmoth Nexus, Foundry of the Consuls, Faerie Conclave, and Moorland Haunt) that support that strategy. Lords like Empyrean Eagle, Thunderclap Wyvern, and Sprite Noble augment our army, an army built by Pride of the Clouds, Kykar, Wind's Fury, Talrand, and Murmuring Mystic. Rally of Wings wins games out of nowhere, and cards like Sephara, Sky's Blade and Sage of the Inward Eye can bring us back from the brink with huge, lifelinking swings.

There are a number of inclusions typical of Shu Yun’s usual playstyle, namely Niblis of Frost, Jeskai Ascendancy, and small packages for removal, extra evasion, protection, and generally triggering Prowess effects. Rather than filling the deck with cantrips, we can rely on our counterspells to reliably check the noncreature triggers in the deck. Things like Soulblade Djinn and Strongarm Monk get a little tighter in their utility given that their triggers prefer for it to be your turn (although of course you’ll frequently be casting counterspells on your turn), so they’re the first to go should you choose to modify the deck a bit. Dismiss is our worst counterspell, so that could go as well.

Strong replacements would be a bit more removal (perhaps Pongify), and counterplay outliers like Counterbalance and Bazaar of Wonders, or non-blue counters like Lapse of Certainty or Red Elemental Blast. Cards like Dovescape and Swan Song actively hurt us by giving our opponents something to block with, so we don’t want those.

Surrakar Spellblade is a funky inclusion, since although it cares about instants and sorceries, it’s not evasive on its own, and relies on Archetype of Imagination or some other way to get through. Magus of the Moat would be a very strong replacement for this, pushing the deck towards flight with a bit more surety. In a recent edition of Commander Showdown, Joseph Schultz recommends the moat magus for a brilliantly versatile Kykar brew – which, not unlike the deck today, takes an aggro-control approach through Kykar’s many facets and an evasive offense via “flying tribal.”

There were a few cards in an earlier build that didn’t quite make it. Think Warden of Evos Isle. The hardest card to cut was actually Docent of Perfection, since it provides something of a tertiary tribal bonus – per EDHREC’s guidelines, this is technically also a Wizard tribal deck. Themes within themes within cells interlinked. (I wonder how long I’ll keep including these cinema memes. Cinememes?) Anyway, that card provides an additional attacking lane if you happen to draw into it. Just note that if you choose to include it, none of the deck’s tokens are Wizards, and going wide with tokens is your likeliest win condition.

What in the world could flight and fight possibly have in common? A lot, it turns out. Both require dynamic adjustment to be successful. Watching finely-tuned cEDH decks – or highly tiered decks in any format, for that matter – square off is really quite the thing to watch. A lot of the time, it’s a race to see who can blast off first, but games are rarely so neat. In a format like Commander, things get messy fast, and that’s amazing. Navigating lines of play as they emerge – often for the first time, like, ever (this game is big) is exhilarating. But Shu Yun learned to brave such storms with a measure of stoicism.

And of course, countering everything can reduce the table’s total stoicism. Forge ahead carefully, politically, methodically. Or else you’ll be buying everyone drinks later.

These percentages in this brew essentially amount to a 60/40 split: an aggressive flyers deck (the “60” side) with a counterspell subtheme (the “40” side). The only reason this split works is because there are so many cards that bridge the gap. Siren Stormtamer, Glen Elendra Archmage, and Hypnotic Sprite are all flyers and also counterspells. The real glue holding these archetypes together are cards like Kykar, Murmuring Mystic, and Talrand. To a lesser extent, things like Sage of the Inward Eye and Niblis of Frost help out both themes, they’re just a little more situational.

Since the division here is so nearly even, it’s rather difficult to simply label the counterspell side of things the subtheme of the deck. Furthermore, the close split means your dual strategies will be gleaned by the table earlier. This is less of a “Surprise, I’m actually a Superfriends deck,” and instead it really feels like Batman two decks, two halves of a whole, somehow not at odds with each other. Auspiciously, these are not dueling strategies.

What? Oh, sorry, I was just choking.

That’s it for this installment of Dual Shot. What decks have you built that used two different approaches on nearly equal footing? What were the cards that most elegantly synergized the strategies? Let us know in the comments! We’ll find ourselves in this strange place again soon.