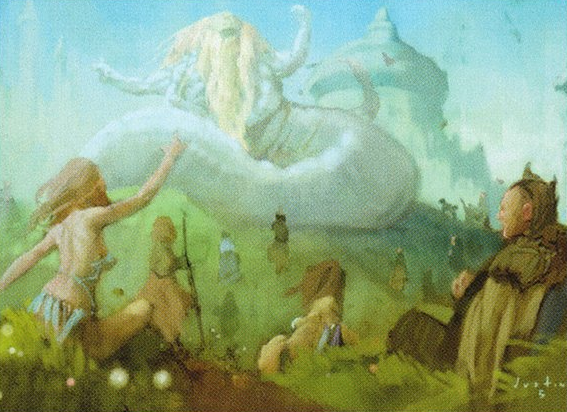 Before the histories, before the songs, there was the genesis of a sort of protoculture. A collective of wanderers, working together to find meaning, pattern, and purpose. In this semiotic genesis, there were countless groups - families, really - that simply died out, lost to the grindstones of time and nature. Others bested the odds, and their lines continued, but always surviving into the future in unrecognizable form. The very earliest could not even be said to be progenitors of the blood, since no one, not even the very oldest, can remember them.

Welcome to Dual Shot, where we brew two decks at the same time... in one deck. This time, it's a keyword soup deck atop a sacrifice deck, led by Rayami, First of the Fallen.

Since there are no stone tablets, no monolithic records, no cave paintings, scraps of vellum, or familial tapestries, there is no bridge to the past beyond conjecture. But perhaps the best primary source is a survivor. Despite the incalculable tract of time between the present and the first stirrings of Ulamog in Akoum, there are Bloodchiefs who endured more than just their transformation - they endured the passage of the millennia. But there is an irony in agelessness, for even the greatest sires of vampirism on Zendikar are slaves to memory.

There may be no clear memory of the past, but there are some cards that can bridge the thematic gap. Without getting too far out into the Midsommar weeds here, let's take a look:

With Rayami on the battlefield, death means getting etched into indelible memory. Torrent Elemental offers some nice, clean synergy, but scratching a bit beyond the surface shows that since we need our creatures to die, some simple payoffs for that seem like a good idea. However, it gets tricky: Poison-Tip Archer provides a death trigger for our creatures (and everyone else's creatures, incidentally), but Rayami will steal those deaths, saving them for the soup instead. It's still a worthwhile inclusion, as it flavors the soup with deathtouch and reach. Just be aware of these replacement effects.

In a similar vein, cards like Demon of Catastrophes or Archdemon of Unx can eventually provide keywords to Rayami, but would sooner sacrifice something else, offering that creature's keywords to the soup. Ultimately, much of the bridge-building is performed by Poison-Tip Archer. Imagine this sequence: Korozda Guildmage and Golgari Germination to provide the fodder, Golgari Charm to inflict a substantial loss of life.

But let's take a look at more likely scenarios - each chunk of the deck as they might play out. Firstly, we have our creatures that, should they be sacrificed for the cause, or die some other way, feed Rayami. Though, as willing as Runaway Carriage is to die for the cause, it's odd to imagine how the First to Fall assimilates its abilities. Maybe, in his primitive perspective, he saw how the carriage wheeled about and crushed its pedestrian obstacles. Then perhaps the proto-Vampire thought to himself, "Oh, that's how you do it."

A fun direction to take this deck, given the theme of creatures to include for Rayami's sake, is Mutate. Nightveil Predator, Banehound, and Ochran Assassin make solid targets for that strategy. It is, of course, challenging to make room for it, given the other moving parts we want to include. Evolutionary Leap, Perilous Forays, and Vampiric Rites provide a bulk of our succor for sacrifice. These tools do force us to make decisions about when to keep a creature in play, as a defensive piece or as a threat, and when to draw or when to ramp. It can be difficult to read the table and to discern when or if to make those choices, but that's part of what makes this brew entertaining.

But the thread to the past is rather indelicate, so protecting our plan with things like Withering Boon, Mystic Genesis, or even Glint will be essential. And since our primitivist sensibilities are easily offended, disrupting the trappings of modernity as peacocked by our opponents is also a good idea. To that end, employ age-old methods like Grave Birthing, Tribute to the Wild, and Shred Memory.

The erosion of time may have softened the narrative into illegibility, but there's still something resembling a story here. There always is - for everything - no matter how much has elapsed, or what's been forgotten.

That's all for this installment of Dual Shot. Be sure to send us your keyword soup recipes! How have you fared with Rayami, First of the Fallen? Or do you prefer Odric, Lunarch Marshal? Kathril, Aspect Warper? Or perhaps paprika? Well, until next time!