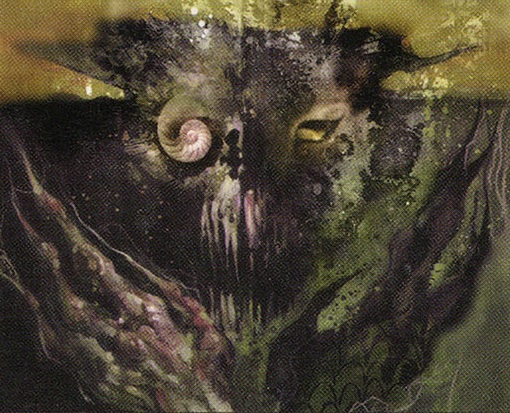 (Spirit of the Night | Art by Cliff Nielsen)

We find ourselves in a transitory place. A place that marks the arrival, or the passing, of a great scholar or fabled ruler. This ephemeral land is heralded by the qilin, or Kirin. The Dragon Giraffe. They inhabit a duality of space, for the transmundane quickly descends back to grounded earth. For that brief auspicious hour that they do appear, they are arbiters of chiaroscuro perception - they are at once scaled in dazzling jewels, precious metals, and the fragments of stars - and modestly unadorned, armored by mud and the austere bells of mountain ascetics.

They are fearsome and exactingly just. They see guilt or innocence, good or evil, but not the humanity between.

Perfect for a Dual Shot.

And welcome to this latest experiment, where we brew two decks at the same time... in one deck. Our Kirin commander today is not quite as auspicious as the myths would hold - this one has been twisted, its voice of bells now detuned. Our deck-within-a-deck is led by Infernal Kirin, and it would have us play a proper divergence.

Any Color You Want... So Long as it's Black

All of the Kirin Legends want us doing multiple things. Most immediately in that manner particular (and parasitic) to Kamigawa, whereby Spirit and Arcane are lumped together. But then they each do something else. Bounteous Kirin gains you life, Cloudhoof Kirin mills. So firstly, you have the instances of overlap between Spirit creatures and Arcane spells.

Effects like Splice and Soulshift are very clearly predicated on this. But each Kirin allows us to go beyond this encouraged combination of subtypes. Infernal Kirin wants us to play discard, and to that end, there are bridges to be seen through the mist.

As our commander's discard effect is quite specific, and targeted, it's not advisable to rely on that channel for hand hate, and indeed, one might consider utilizing the abilities of this Kirin - or any of its peers - in an incidental capacity. So although we're running several discard effects as Arcane sorceries or Spirit creature abilities, our discard payoffs are minimal. We look to prioritize our winning strategy through mass mana generation into something like Exsanguinate, and by generating a wide board state full of Spirits to sink into Devouring Greed. All the while nattering away at our opponents' longevity with Thief of Hope, or heavier guilts like Choice of Damnations and the black classic Gray Merchant of Asphodel.

Ah, speaking of lands, Crypt of Agadeem is one part of a powerful and elaborate win condition for us. Elsewise, the lands in this list provide pretty typical utility and, uh, black mana, but together with Songs of the Damned, Crypt of Agadeem can do some pretty vile things with Iname, Death Aspect. We can fuel Exsanguinate or even Swallowing Plague if we need to deal with something, or we can pivot into something more traditionally aggressive with Balthor the Defiled, with the hopes of creating a greatly asymmetrical board state in our favor. At a smaller scale, you can churn the dead souls of the past with Goryo's Vengeance or Dawn of the Dead, playing with Sundial of the Infinite to cheat impermanence.

Infernal Kirin does a good job of performing hand hate and disrupting combos, but we're not really trying to win with discard - instead, our general tends to glide more along the lines of interruption. Also, for one added boon, shout-out to EDH Deckbuilding for the Iname + Maskwood idea, which ricocheted into our Rogues and Specters and Gods becoming Spirits, pleasing our Kirin, and enabling Balthor to pump our whole board, since with Maskwood, everything is a Minion!

Even Skithiryx, the Blight Dragon will be a Minion! Skittles is as robust an alternate win condition as ever, but everyone's favorite Dragon Skeleton costs half as much as THPS1+2 for the PS4 (or costs as much as half a copy, if you're in the market for something like THPS1+2-2).

You can go pretty nuts with upgrading the discard side of the deck, with big movers like Waste Not or Painful Quandary, but then you run the risk of just streamlining, leaning hard into optimization, and turning into a Tinybones deck, and we wouldn't want that. (Wait, wouldn't we?)

That's it for this experiment. Finding cards that act as powerful bridges between themes is integral when trying to do everything a busy commander might have you doing. You can easily (and perhaps responsibly) pilot Alela, Artful Provocateur as a flying tribal or Faerie tribal commander, and rely on her other abilities for incidental value - you were going to run Banishing Light and Arcane Signet anyway, right? But finding cards that ford those rivers allows room for interesting, undiscovered synergies - not to mention added elegance and enjoyment of the game.

Here, cards like Baku Altar and Kemuri-Onna proved to be capable unifiers, where Akuta, Born of Ash seems an obvious first cut. And the interplay between Iname, Death Aspect and Maskwood Nexus allows us to get a lot stranger with this list. Just keep in mind that Infernal Kirin rewards a variety of converted mana costs (or, mana values). What unexpected synergies have you gleaned from pseudotribal commanders like the Kirin? What about from abilities generally considered to be parasitic, like Splice? Let us know in the comments! Til next time.