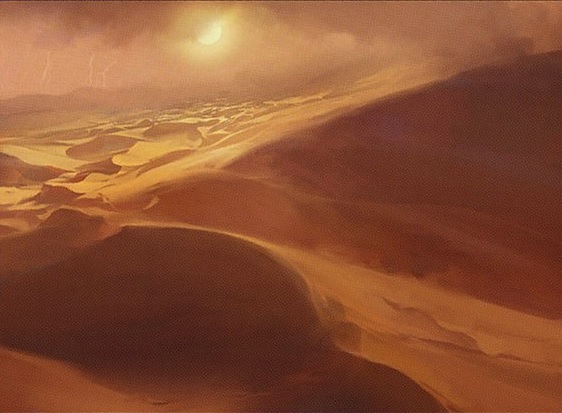 Your lips are cracked. Your legs throb. Despite your dehydration, your eyes water from the wind and from the stinging sand it carries. But you crest another dune. This one has somehow sent all its ice to the leeward side, as if it had been briefly deposited windward, then pushed over the apex by unrelenting, eroding winds. You take pause in your brief shelter, this softer side of a temporary mountain. Well, all mountains are temporary, this one just much more so.

Welcome to Dual Shot, the deckbuilding experiment wherein we brew two decks at the same time... in one deck. The list came before the write-up for this one, and so now I regret not doing a Deserts-matter theme inside of a Snow deck, to truly capture the strange biome of Colorado's Great Sand Dunes National Park in the winter - Blanca Peak, or Sisnaajiní, the Sacred Mountain of the East, also called White Shell Mountain, or simply The Dawn, skirling snow from its great granite crown, creating the impossible phenomenon of snow-capped sand dunes.

I think the endless field of snow and sand and all the wet-dry winds should still be suitably embodied by a subtheme of counterspells, presented here supporting a four-color... Sand tribal deck?

A Maze of Winds

While there are regrettably no Desert shenanigans here, non-blue counterspells should prove dehydrating enough. Refer to DougY's excellent article, which expounds on many of the considerations in the generally far more limited pool of Dune-colored counters. For this list, we went with... well, all of them, nearly, and while some are terribly situational, we do employ a small coterie of cards for exchanging the less-ubiquitous parts of your hand.

Most of our counterspells are restricted by either color or type, which is dangerous. And unlike a counterspell-focused list in blue, we can't really run any payoffs like Talrand, Sky Summoner, Glen Elendra Pranksters, or Guile. Instead, here they're more meant to keep our primary theme alive and running: wide, combative tokens. With any luck, your commander will breathe a Desert into being, and your counterplay will keep the sands shifting.

Dune-Brood Nephilim isn't exactly legendary. More on that later. For now, our primary strategy is connecting with our commander, making lots of coarse, rough, irritating stuff, and getting it everywhere. To that end, we want lots of lands out. That means we're prioritizing land-grabbing sorceries over mana rocks. This also means that bounce lands are out. Instead, we'll run lands that function in quite the opposite fashion.

Once you're generating some quartz, it's up to anthem effects to make your sand worth reckoning. To that end, we're including Gaea's Anthem, Glorious Anthem, Cathars' Crusade, Forsaken Monument, and Intangible Virtue. For additional width, this list enjoys the company of Parallel Lives and Anointed Procession, but since those two cards together cost as much as a PlayStation 4 wireless controller in the default jet black, consider replacing the pair with tools for added height instead - things like Akroma's Will, Collective Blessing, or Glory of Warfare. Speaking of costly replacements, an anthem like one of the former, or even a lord (and multitool) like Trostani Discordant, will make an easy substitution for Akroma's Memorial, which on its own costs as much as Animal Crossing: New Leaf for the Nintendo 3DS.

The fact is that there are a few dehydrating cards in this list, as far as one's wallet's water levels are concerned. Since we used basically every counterspell we had access to, fleshing out the token strategy seems most immediately obvious when considering substitutions - but also try advancing looting, rummaging, and wheeling techniques as a means of cycling through the color- or type-specific counters that might be dead in your hand in a given game or situation.

Now that the body of the brew is sufficiently smoothed by the sands of time, it's time to crack open the commander and color identity with a bit of freezing water.

Not every playgroup is going to let you run a Nephilim. And that's alright, because only a slight change in management is required to facilitate some rule-following. Tana, the Bloodsower does a superb impression of Ravnica's resident sand-monster. Saprolings are green, however, so that would mean swapping out things like Vile Aggregate, Swarm Surge, and Forsaken Monument. Perhaps for Tendershoot Dryad, Thelonite Hermit, and Rith, the Awakener?

As for the Orzhov partner, Ravos, Soultender acts as a decent lord, but his graveyard recursion falls somewhat flat in this creature-light list. Tymna the Weaver plays nicely with an army of Saprolings, and card draw means you're more likely to have a relevant counterspell in hand. One more thing to keep in mind, should we decide to button up our shirts and run actual legendary creatures as commanders, is that Tana's token-generation is not land-dependent, but rather damage-dependent, so the land ramp package that was prepared for Dune-Brood is less synergistic in this new context. But beyond that, scarcely any tinkering should be required. There should be plenty of anthem effects in the brew to skirt the need for a Voltron strategy in support of Tana, although a pair of boots couldn't hurt.

Given enough time, even mountains are ground to dust. It's strange that the mounds of memory that are left behind do a decent impression of the stone they were hewn from. And like memory, the sands pile up, shift, and change, pushing their gradients into the neighboring peaks and dusty valleys. It's those surreal moments, often caught up in the landscape, that make us question the veracity of our experiences and our expectations. Sand and snow. Uh, tokens and counterspells. Hmm, really gotta try that Snow/Desert idea out.

That's all for this edition! When have you brewed with commanders that aren't quite commanders? How do you feel about the Nephilim? What are your opinions on sand? Let us know in the comments below! Till next time.