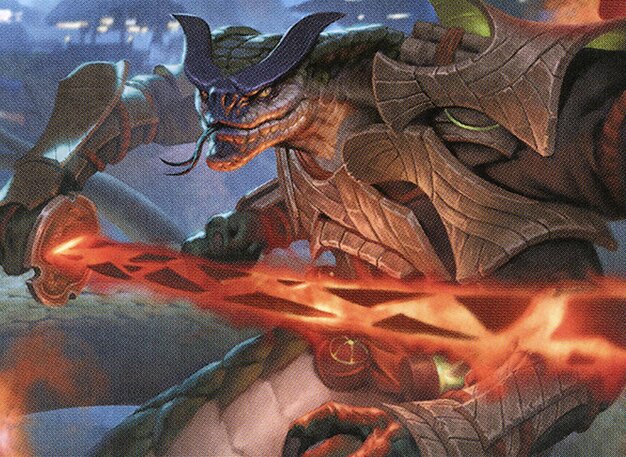 Let's take a look at Chishiro, the Shattered Blade.

Chishiro is the real deal! A four-mana 4/4 that has two impactful abilities is already pretty good, but when you factor the ways that these abilities complement each other, we see Chishiro's true potential as a commander. Creating a 2/2 token for each Aura/Equipment that enters the battlefield is a pretty good rate, especially since there are many zero-mana Equipment, and Auras are well-known for their sheer versatility. The end-of-turn trigger can also be pretty powerful and can snowball pretty hard if we invest in counters synergies, since +1/+1 counters counts as modifications.

Red is perfect for going wide, and it offers cards like Purphoros, God of the Forge for token-centric builds, while green has counter-based support, which we can use to leverage Chishiro's second ability for a more go-tall build.

Chishiro's kit tends to point towards a go-wide strategy, and leveraging all the extra value from our spells to build a giant board - but what if we instead used our threats to go taller?

Vehicles are cost-effective threats that have an implicit cost of needing other creatures to Crew them (I'll refer to those as 'pilots'). Chishiro provides a constant stream of 2/2s while still allowing us to advance our board by playing Aura-based mana acceleration or removal. It may sound suspicious at first, but the end result is a surprisingly smooth playstyle!

For our Vehicle selection, a good place to start is by looking at Crew costs that come in multiples of 2. For instance, Esika's Chariot is an efficient way to make more tokens while maintaining a clock, and we have almost no trouble activating Mighty Servant of Leuk-o's Crew trigger, so it becomes a reliable source of card advantage that also smashes faces. Given that most of our cards are noncreatures, Mizzium Tank is a freebie that also grows, while Thundersteel Colossus is an exciting top-end threat that can easily push through that last bit of damage that we need.

Our commander doesn't care who or what our Auras are placed on, merely that they enter the battlefield under our control. As such, we can play around with different effects to fill our Aura quota. Overgrowth effects are usually less popular than their traditional ramp counterparts, but they allow us to play a large number of Auras and create lots of 2/2 tokens without sacrificing precious deck space. These Auras come in two different types: the vanilla, like Fertile Ground, which are early-to-mid-game-focused and provide more ramp for less mana; and the utility Auras, which come with small benefits attached to them, such as Kenrith's Transformation. These are good draws all around, and they're even better when they knock down a terrible threat and create a creature for us!

Cheap cantripping Auras, like Dragon Mantle and Frog Tongue, are the lifeblood of our deck, acting as decent draw effects with excellent upside. One mana to draw a card and create a 2/2 token is dang powerful. We don't even care all that much about any further effects when these cheap enchantments draw cards!

One of the best things about Vehicle decks is that the usual utility creatures become pilots, so there's a lot of space to play around. Champion of Lambholt is a powerful card for Chishiro in general and gives evasion to our already beefy threats. Professional Face-Breaker gives us an impressive combination of both mana ramp and card draw, which helps us in the early to mid-game, and Quicksmith Genius is great at filtering cards in our hand.

Aside from our ramp Auras pulling a two-for-one when our commander is out, we also get plenty of value from our utility-based Vehicles: Cultivator's Caravan and Hoard Hauler are good ways to get ahead in mana, Unlicensed Hearse and Nautiloid Ship are "free" sources of graveyard hate, Reckoner Bankbuster and Smuggler's Copter provide more card draw, and Surgehacker Mech and Skysovereign, Consul Flagship are solid creature and planeswalker removal.

Our Equipment suite is a lot less flashy than our Aura suite, but don't sleep on them. We have two types of Equipment: 'cheerios' and protection pieces. The first type, cheerios, are zero-mana Equipment, which serve as a great way to fill our board with tons of tokens all at once. I recommend sandbagging cheerios, holding them in hand to help rebuild after someone plays a board wipe and we need to reestablish our board. The second type are the usual protection Equipment, like Darksteel Plate. These are crucial because they help us keep our commander around, and we need that extra time for Chishiro to spit out all those pilots!

For our opening hand, we're mostly looking for some cheap threats and enablers (Auras and Equipment). While it's true that our gameplan starts after we get our commander into play, that doesn't mean we have zero meaningful choices in the prior turns. Setting up our board by playing our Vehicles is one important step, and so is knowing when to commit our commander to the board. Usually, it's better to wait until we can cast him and several Auras on the same turn, to get immediate value out of him.

By the mid game, we should have a couple of Vehicles out and should start pressuring our opponents by activating them and attacking frequently. Usually, this stage of the game is when the board wipes start coming out, but this is why Vehicles work so nicely with Chishiro in the first place - our pilots are destroyable, but our actual threats dodge board wipes extremely well. We only need to care about keeping our commander safe. If he's removed too many times, we may have a rough go of it, but since so many of our Auras are also cantrips, it's hard for this deck to ever run out of steam!

Chishiro is a versatile commander, and many readers may see the decklist and seek to make some adaptations. There are two main directions I think the list above could take when deciding upon future upgrades and evolutions: artifact/Equipment matters, and enchantments/Aura matters. I went for a more balanced build between the two, but there's plenty of power to be had when streamlining along just one of these themes.

The enchantment route has plenty of draw power, especially with Enchantress cards like Enchantress's Presence and Setessan Champion, which makes the ramp and removal suite even more effective. Meanwhile, the artifact route feels a bit better against removal-heavy games, since it gets a lot of recursion pieces like Daretti, Scrap Savant. Making tons of 2/2 tokens after a huge Scrap Mastery does sound pretty wild. Enchantment themes lean into green's strengths, while artifact themes lean into red's, so the choice of streamlining the deck may depend upon your favorite color for modifications!