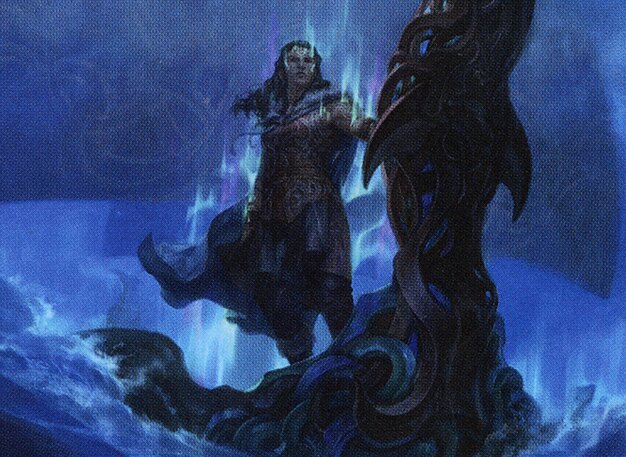 (Cosima, God of the Voyage | Art by Micah Epstein

In this article, let's take a look at one of the Gods from Kaldheim. Dual-faced commanders have always intrigued me, since the added flexibility gives us space to play around with both aspects of the card. Cosima, God of the Voyage is a powerful commander with two separate sides that are very synergistic with each other, but you can also build with only one of them in mind.

Cosima's side is quite the powerhouse, providing a slow-building clock that will even give us cards to protect itself in the process. It plays better in a control shell where we're guaranteed to have consistent land drops and can play it early and leave it exiled for a few turns to restock our hand afterward. It's worth noting that while the Vehicle side does offer synergy with Cosima, it might be too slow to try to keep switching between sides.

While Cosima is a slower and more control-ish card, The Omenkeel is better suited for aggressive decks that want to abuse its land-stealing ability and play fewer lands. A Vehicle that cares about other Vehicles is also pretty new for this color, since Vehicles-matter effects are usually either white, red, or Boros. This offers us some cool interactions that we often don't see in the archetype, like Ensoul Artifact effects.

The Omenkeel is interesting because, while its kit is designed to find lands for its controller to play, it can also be used as a way to mill our opponents by exiling their cards. The best part is that since the lands are already exiled, we don't need to worry about graveyard-based synergies.

However, with a one-to-one damage-to-card ratio, we won't be that effective; after all, each player starts with 40 life vs. 99 cards in a deck. They'd lose to damage long before losing to mill! Luckily for us, there's a lot of support that can help us out, such as Mindcrank or even Sword of Body and Mind. In other words, if we're deciding between good mill and good combat, we can just say: why not both?

Our Vehicle suite must therefore be very aggressive, since it helps us to get the ball rolling in the mill department. Vehicles are almost always very aggressively costed, which allows for our early game to be quite powerful, although they can get out-scaled if we don't draw our support cards. Aethersphere Harvester, Heart of Kiran, Sky Skiff, and Smuggler's Copter are cheap, evasive beaters that are great to put the pressure on most stages of the game. Cultivator's Caravan is an impressive role-player in this type of shell, being both a mana rock and beater, while Skysovereign, Consul Flagship and Weatherlight provide a lot of utility while being great top-end.

Our pilots provide a lot of passive utility, either by having useful ETBs, like Amphin Mutineer, or by providing constant value, like Sai, Master Thopterist. Meanwhile, Diligent Excavator, Dreamborn Muse, and Sage's Row Denizen have the added benefit of also acting as constant mill sources, which are an important part of an unconventional mill deck like ours. Chief of the Foundry, Etherium Sculptor, Foundry Inspector, Padeem, Consul of Innovation, and Sai, Master Thopterist are a pretty decent "Artifacts Matter" pilot suite.

Aside from our beatdown plan, we still want to have a few mill cards that aren't reliant on combat, both to boost our mill potential and act as a back-up in those games where our beatdown might otherwise be lacking.

We have two different types of mill cards: one-shot and constant effects. The first type is great at bursting down libraries and providing an immediate return on our mana investment; Fractured Sanity, Maddening Cacophony, and Tasha's Hideous Laughter are very cost-effective global mill spells that won't get in the way of our main gameplan. The second type is crucial for our success; after all, milling in Commander is more of a marathon than a sprint. Altar of the Brood, Mesmeric Orb, Hedron Crab, Ruin Crab, and Psychic Corrosion consistently put pressure on our opponents and can also act as a lightning rod for potential removal spells.

We're also packing some cards that turn our artifacts into creatures, like Ensoul Artifact. These are a bit of a double-edged sword. They provide some quality-of-life improvement, making it so that we don't have to worry about the Crew costs of our Vehicles, but they also leave us more vulnerable to board wipes, which are normally a non-issue for Vehicles. The Blackstaff of Waterdeep, Animating Faerie, Skilled Animator, Ensoul Artifact, and Rise and Shine provide a solid base for this type of effect and are great early-game ways to further accelerate our already aggressive gameplan.

The last piece of the puzzle is ways to give our Vehicles evasion, which is very important for a deck that wants to deal combat damage. Archetype of Imagination, while a bit on the expensive side, basically makes our creatures unblockable. Workshop Elders pulls double duty as both an animator and evasion-granter. Whirler Rogue provides a few key creatures unblockability while also creating a few bodies we can use to pilot our vessels. Levitation is just borderline playable, but I think the extra redundancy is worth this somewhat lackluster effect.

For opening hands, we're mainly looking for a Vehicle and a pilot or two. It's important to start putting pressure as soon as turn 3, when we untap with our commander, because those early turns are less likely to have blockers, so we get to rain down some terror before we start having to worry about evasion.

Our deck plays like an Aggro deck, which means that our early game is where we'll be doing the most damage. Being able to curve out effectively is important, and having an aggressive curve is usually recommended. However, there are some inclusions that make our deck stronger than the average combat-centric list.

By the mid-game, our creatures might start losing a bit of their spark, but luckily for us our threats are very resilient to board wipes, thriving in the post-board-wipe battlefields (especially since our creatures can Crew on the same turn they enter play). That being said, this is the point of the game where evasion starts making the most difference.

The late game isn't as bad as it might seem. Here, our "Plan B" cards work great, allowing us to flip the switch and play a bit more like a conventional mill strategy for anyone we haven't already worn down. Plus, we have a lot of creature lands to go full aggro if all else fails. Our biggest weakness is the lack of good control elements, which can mean that we might get taken out by an unanswered threat that overstays its welcome.

The deck already has a lot of different packages, so it's hard to keep a streamlined list without sacrificing a bit of versatility. One package that I felt didn't play out that well, but had potential, were the Bident of Thassa effects that draw cards on combat damage. These cards could be played in a more tempo-oriented shell, but I feel that we'd need be a bit faster than we are right now.

The pilot suite is very flexible too, and there's always plenty of room for changes. Grand Architect can be a great card for this type of shell, providing solid mana and the anthem effect. Our mill suite can be very easily changed, too! Court of Cunning could be great on less aggressive metas, where we could try to maintain Monarch for one or two turns during the game. Mixing mill and combat keeps our enemies on their toes, and this could also be explored further by other Omenkeel voyagers.