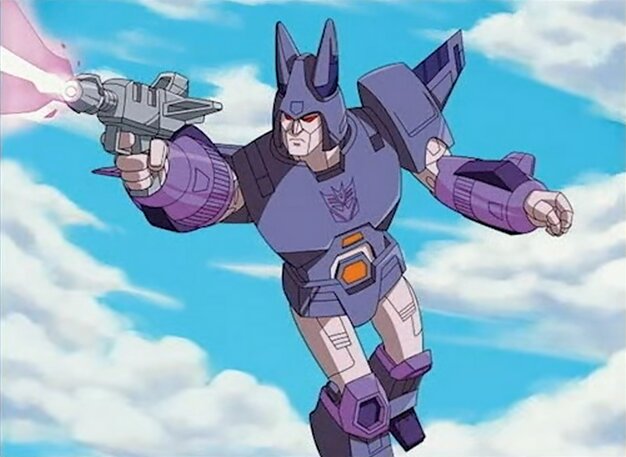 This week, let's talk about a Transformers card!

Since we're dealing with a double-faced card, let's discuss each side individually.

Cyclonus's creature side is a bit expensive for a flyer that Connives on combat damage, but it has many available synergies: Madness, Flashback, and reanimation are just a few possibilities, and that's without even looking at artifacts and their inherent synergies with counters.

Cyclonus's Vehicle side is very powerful, giving us an entirely new beginning phase (which comes with a new set of untap, upkeep, and draw steps). Getting to untap lands again is great in a color combination that has such powerful instant-speed interaction. Getting a new batch of upkeep triggers can be especially strong if we're building around this effect. Like, you know a card is strong when its 'weaker' effect is card draw. Another interesting side effect of this side being a Vehicle is that we're immune to creature-based board wipes, so if we're able to keep Cyclonus consistently converted, we're immune to board wipes every few turn cycles.

Cyclonus' main drawback is its slowish nature. To flip to the Vehicle side, we need our commander to have 5 power after the Connive trigger, which, without any support, means that we need to attack three times. Either that or pay a heftier mana cost! With that in mind, I think it's easy to see how Cyclonus tends to be drawn into more aggressive shells where we'd want to actively buff its power and get to that state where we can convert it every turn as soon as possible.

Cyclonus's kit rewards aggression and aims to get him to flip into his Vehicle form as often as possible. Being a Robot means that we won't get any creature type synergies synergies, but as a flyer, we can still find plenty of other support!

Flying theme decks have a deep pool of possible threats and helpers to choose from. Normally the 'flying matters' strategy is found in blue and white, but blue and black can still make a lot of magic happen in the air! Warden of Evos Isle powers out our creatures much more quickly. Donal, Herald of Wings doubles our body count and gives us extra ETB and 'Lord' effects for any flying creatures that pump each other up. Siani, Eye of the Storm might not seem like much at first, but it fits right into an aggressive deck that wants to draw exactly the right cards to continue the onslaught. Tide Skimmer and Windreader Sphinx each give us and impressive body-plus-card-draw-engine combination.

A lot of those classic cards are blue, so what does black bring to the table? Tons of stuff!

Drana, Liberator of Malakir can spread counters to the team, and her first strike allows us to get the benefits out of the pump mid-combat. Rankle, Master of Pranks can help control the board and even to control peoples' hands, giving us a ton of versatility. Silumgar, the Drifting Death provides a solid swing in board state by sniping any 1-toughness creatures, and he can make it easier to for us to attack without worrying about enemy blockers. I really like Sower of Discord, too. It's just a great card to slot into aggressive shells, allowing us to hurt two enemies at the same time, doubling our combat potential.

Anthem effects that give our team +X/+X are a great way to kick a 'go-wide' deck into overdrive, and this deck loves to go wide! Not only that, anthems will also help us get more value out of our commander, because we want to convert Cyclonus to its Vehicle side as much as possible. Keeping Cyclonus above 5 power is key, so the classic flying pumps help us out a ton here. Gravitational Shift is an impressive card in both the offensive and defensive departments. Favorable Winds is expected but well-loved. We can even afford to pay a bit of extra mana for a Glen Elendra Liege to pump up most of our creatures by +1/+1, and to give our commander +2/+2!

In addition to all the attacking in the air, Cyclonus will hopefully Connive every other turn, and we'd be fools not to extract some value from that effect! Flashback spells like Deep Analysis and Memory Deluge are excellent choices to get some card draw stashed under the mattress. Drake Haven will help us be more action-oriented, trading mana for more bodies to go wide and to avoid getting blown out by board wipes. Containment Construct will act as a card advantage engine and can be used as a way to completely negate the loss of a card.

This is an aggressive deck, but we're pretty flexible as far as opening hands go. We aren't as aggressive as, say a Goblin deck, but our threats are all evasive, which gives us a nice amount of extra reach even if the board gets clogged with creatures in the later portions of the game. By the mid-game, we want to dig for any of our support cards and payoffs, such as Gravitational Shift or Heraldic Banner. This is the point of the game when we start being able to flip our commander every other turn, which will grant us a huge boon in mana to help us snowball even further.

Our late game is good for an aggressive deck because we have more card velocity than most aggro shells. If the game boils down to a top-deck war, we're better suited to grind out a win. With our commander granting additional untap and draw steps, we can even gain additional threats by animating our creature lands like Faerie Conclave, since our mana will untap again anyways! These little tricks all add up to keep us chugging even when enemies expect an aggro deck to stall out, so Cyclonus will truly sabotage our opponents.