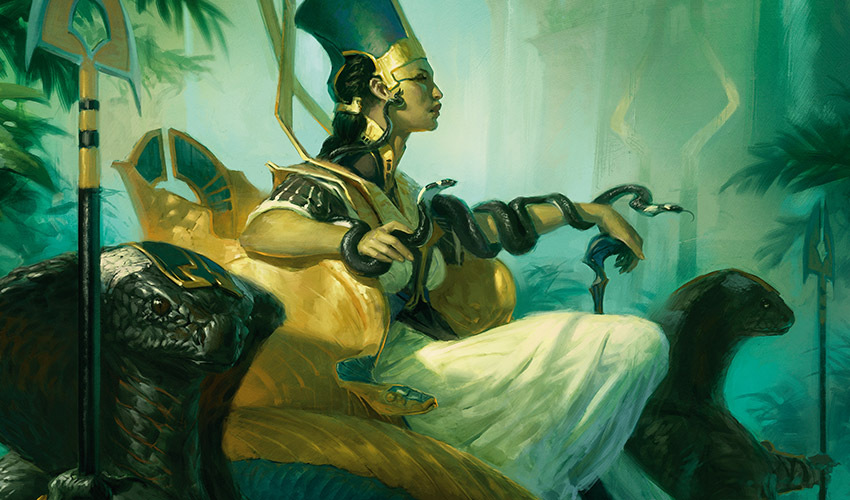 Cheap commanders are great. I love how they always give us a consistent curve. Hapatra's an amazing turn-two play, sometimes considered to be at her best in those earlier stages of the game, where she can reliably attack without having to worry about blockers. Attack opponent X, then put counters on opponent Y's creatures? Awesome! It's especially amazing that there are so many synergies Hapatra can make use of: counters, tokens, deathtouch... she can do a lot for such a cheap body.

-1/-1 counters can be harder to build around than +1/+1 counters, not just because we see more +1/+1 counter effects in Magic sets, but also because 'controlling an enemy board' has a smaller range than 'buffing up my own board'. However, -1/-1 counters don't have to our primary focus with Hapatra. Perhaps we could turn that into a subtheme instead and give her a new archetype that will greatly benefit from keeping a big board under control.

There are two big things that make Hapatra a great tool for controlling the board. First, shrinking enemy creatures is a natural part of her gameplan, and that will constantly make the most threatening creatures a lot less threatening. Second, we get deathtouch creatures as a reward whenever we do this! Those are amazing defensive creatures. That much potential for board control, on such a cheap body, is just perfect for a Superfriend strategy!

Vraskas, Garruks, Lolths, all these planeswalkers need good defenses for us to reach their amazing ultimate abilities. With Hapatra leading the charge, our turn-two commander will create a huge defensive line that keeps our 'walkers super safe, and super deadly.

Not only that, but both -1/-1 counter decks and Superfriends decks are strategies that naturally want to play a ton of cards with Proliferate! In Hapatra Superfriends, these cards get even more impressive, simultaneously acting as a defensive tool and speeding up the clock to help our 'walkers reach their ultimates more quickly. Contagion Engine and Contagion Clasp are great incremental value engines whose initial value goes into overdrive with our commander. Smell Fear can be a strong removal spell, acting as a type of Doom Blade with powerful upside. Plaguemaw Beast is slow and clunky, but we're in no rush here, so having this consistent source of Proliferate is very much appreciated.

We protect our planeswalkers so well that we don't need to run a bazillion of them. They'll be super hard to kill regardless, so we can pick the very best 'walkers, and the ones we're playing pack plenty of power. Lolth, Spider Queen and Liliana, Dreadhorde General are great value planeswalkers with kits that mesh really well with our commander, from their static abilities to their ultimates. Garruk, Apex Predator continues to be one of the most exciting top-end Golgari planeswalkers out there, providing solid board control and creating more and more bodies. Even weird ones, like Garruk, Unleashed, can act as a 'support' planeswalker, allowing our commander to get through pesky chump blockers.

While we're not trying to exclusively craft a -1/-1 counters deck, our deck still has the need for a solid -1/-1 counters package, so that Hapatra can get things started in the first place. Finding the right balance of these cards might be a bit meta-dependent, since creature-heavy environments might get more mileage out of cards that put -1/-1 counters onto every creature in play. My preferred approach is to avoid going in too deep with these effects because we really only need a handful of deathtouch tokens to fortify our Superfriends against a bevy of attackers.

Yawgmoth, Thran Physician might be the best all-around card in the deck, providing an absolute amount of value and versatility (which includes a nasty combo). Grim Affliction wouldn't normally make the cut, but that additional Proliferate is just too dang good, making blockers and pumping up a 'walker. Banewhip Punisher is a good value creature, providing a solid delayed removal and a body to go with it. Heck, Carnifex Demon is just crazy powerful when it hits in the mid-game! We care very little about the fact that it friendly-fires our own tokens, because Hapatra will just replace them!

For opening hands, we're mainly looking for some early ramp and a planeswalker or two. Our mana curve might be a bit higher than other decks, what with all these planeswalkers, but since we have such a cheap commander, we can easily get our early game covered. Hapatra can snipe some early mana dorks an utility creatures, but even if we can't find another creature to put a -1/-1 counter onto, don't be afraid to put one onto Hapatra herself! Those deathtouch blockers are instrumental to protecting our planeswalkers once they start to arrive.

By the mid-game we should have at least one or two Snakes, which means the planeswalker arrival can finally commence! It will start a little slow, but with every 'walker we cast, we'll keep up with our enemies and the speed of our clock will increase. It's great to keep Hapatra in play if we can, but we don't need to be too afraid of losing her, because her cheap mana cost means we can always get her back really easily.

The late game often is kind to us, barring explosive aggro or combo decks. Very often, we can reach a post-Wrath board state that leads into a minor game stall-out, and at that moment, if we manage to land a planeswalker like Vraska, Relic Seeker, or even plain Ob Nixilis Reignited, we can take control the pace of the game. Importantly, our deck does not have 'explosive' plays - we're not casting Tooth and Nail or Torment of Hailfire for a sudden victory, for instance - but with a little bit of scrappiness and clever timing, our slow-and-steady gameplan will be almost impossible for our enemies to dismantle.

There's always room for improvement and adaptation for a list like this! Since this is a two-themed deck, we certainly run into that classic issue where, by the time we are finished including lands and general-purpose staples, we're somewhat card-slot-starved. It's entirely possible to choose to focus on one of those themes more than the other or to try a more middle-of-the-road approach.

The Chain Veil is a powerful card in Superfriends lists, allowing for two (or even more) activations on the same turn. I thought it felt a smidge clunky in this deck, but you could totally choose to use it if you want extra planeswalker power!

Another powerful planeswalker staple I didn't include in this list is Doubling Season, which arguably could increase our explosive potential. I chose to omit this card because ultimately I think opponents are more likely to focus on taking you down if they know your deck has a Doubling Season that can auto-ultimate planeswalkers. This could be a meta call, though! If you like doubled loyalty and doubled Snake tokens, this is another exciting staple you could try.

And of course, you could make this alternative Hapatra brew even more alternative! If you'd like to go for a more Stax-oriented shell, that might be another powerful way to protect a board of planeswalkers, while we lose nothing but a few spare Snake tokens. We'd probably have to play fewer payoff cards (for instance, losing some of the Proliferate cards), but overall I think this themes and our commander could mesh pretty well if you're interested in making the deck a bit more vicious!