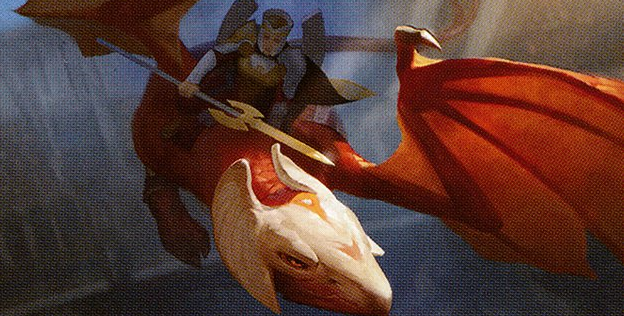 Let's take a look at their kit:

Knights your team controls have Flying and Haste

Observation 1: They are an interesting twist in the tribal formula, because if we go into either tribe, the commander we care about is the one from the other tribe

Observation 3: Sylvia's bonus to Dragons is also much better than Khorvath's. She also curves really well into aggressive four-drop Dragons

Observation 4: Getting both commanders out is quite strong, as they represent 10 power in the air with haste.

With that in mind, let's see how this Boros pair is usually built:

This is a fun one! We can see that both tribes have their grasp in the average lists, and it leads to a strange dual tribal mixture.

I personally dislike going this route in Boros because we lack the card draw to reliably access our relevant pieces, and getting stuck drawing enablers for one tribe while needing the other is game-ending.

We established that, once they are both out, this duo can do some real damage to people, and what's the most efficient way to kill people with our commander? If you guessed Voltron, you're right!

One of Voltron's main challenges is ending the game after killing the first player. It's usually very easy to eliminate one player, but as the game progresses (and people get scared of you) it becomes harder and harder, to the point that even an 11-power commander that represents a two turn clock won't be fast enough with our single attack step each turn.

This is where having a second Voltron commander really helps; we can grow Sylvia in the early game and quickly take someone out. Then, by the mid/late game, we get to attack the remaining players with both our commanders separately.

Voltron decks usually revolve around building one creature as large as it can get, so it can dish out 21 commander damage ASAP. They usually do that by using a bunch of Auras and Equipment, but since we have two possible targets, we can't reliably make that strategy work. Instead of using single-target pumps, we have to focus on broader anthem effects.

Anthem effects are usually more effective in go-wide token decks, where the power boost is made more impactful with multiple bodies in play. Even with only our two commanders, though, anthems are great for us. With double strike, every point of damage is twice as effective, and with both commanders in play, it could even become four times more powerful. Day of Destiny, Glory of Warfare, Jor Kadeen, the Prevailer are a quick way to provide sheer damage, while Always Watching, Bastion Protector, Bloodsworn Steward, and Elesh Norn, Grand Cenobite give some utility while still offering some additional power to our commanders.

Even though we're not focusing on Equipment, there're still some very good inclusions. Swiftfoot Boots, Lightning Greaves, and Darksteel Plate are the protection trio that help our commanders stick around long enough. Sunforger is a value engine that also gives a huge +4 power boost. Then there's Sword of Feast and Famine, which is an excellent ramp tool that plays well into our gameplan, because we'll be playing spells before combat, but will want mana afterward too.

Aside from the Voltron package, we are also packing a few Dragons for that sweet midrange value. Territorial Hellkite is a loose cannon, but playing it with Sylvia on the battlefield is so strong that the RNG aspect of the card can be put aside. Verix, Bladewing is a decent body as a four drop, but has the benefit of becoming insane when played with Kicker. Hellkite Igniter hits like a truck and out of nowhere, it's very helpful in eliminating players because of its huge burst.

When building Boros, one has to REALLY think about those two inherent flaws of the color combination. Yeah, I'm talking about ramp and card draw.

The first part, ramp, is relative easy to fill out; we have both the usual artifact ramp package and some of the white land "fetch" cards, like Land Tax and Weathered Wayfarer. To stay ahead of the rest of the table, we're also using a minor Treasure package: Treasure Map pulls triple duty as a card filtering, ramp, and draw when it flips. Smothering Tithe is a good way to quickly generate a lot of mana in multiplayer games and has obvious synergy with Treasure Map. Curse of Opulence doesn't produce Treasure, per se, but is functionally close enough, and is a cheap way to get some value throughout the game.

Getting good sources of card draw is tough in Boros; most of the red rummaging spells get pretty weak if we don't have graveyard synergies, or when we start to lose cards. This is where creativity pays off; we must use the few tools at our disposal to find what we need. For example, fetching a bunch of lands to hand with Land Tax gives us tons of fodder for Cathartic Reunion and friends.

Another good source of card filtering/card advantage are planeswalkers. Even though we are not good at defending them, if we only get a couple of activation it's already good enough to include them. Sunforger is also an interesting source of card advantage that has almost no opportunity cost, as most of its targets are good enough on their on to be included anyways.

Opening hands are usually very generous, as we have a three-drop commander that hits hard. The tough part is being able to maintain that early game pressure throughout the remainder of the game. Our opening plays need to lead us somewhere, whether by being aggressive or by being able to ramp and draw into later threats. Either way we need to commit to a plan, and fast. This is very important as we don't have the card draw to get us out of bad decisions.

For the early game, we should try to find our first target. Since we don't have that many cheap evasion enablers, hitting the opponent with the lowest creature count is usually a good place to start. Sylvia is great as a three-drop, and turns four-drop Dragons and power-pumping or damage-doubling spells into great draws on the following turn. The usual amount of time we need to kill out first target this early in the game will be 3-4 unblocked attacks. It may seem like a lot, but the snowball aspect of Voltron can't be overlooked.

By the mid game we should have eliminated (or be close to eliminating) the first target. This is the break-off point, because it's about this time where people start casting their Wraths and, for each remaining player, the chances of them having interaction increases. By now we can play Khorvath and have our wombo combo, which will help eliminating the remaining players. Since Sylvia is so cheap, it's not the end of the world for her to be destroyed after she did her job eliminating the first player, as we can play her again after Khorvath is out, where she'll be swinging with haste.

Late game is not as bad for us as for other Voltrons, because we get to avoid taxes by playing two commanders! If Khorvath is too expensive, play Sylvia instead and rack up her commander damage. Keep in mind, though, that we only have a select few cards that are super big, so by the late game, it's possible for us to be stopped by another player's huge random creature(s). Fortunately, we have a few ways to grab the victory from our opponents' grasp. Normally, these ways will include firebreathing lizard things coming out of nowhere and dealing lots of damage, which is pretty darn awesome.

This is a different take on the Voltron formula, and because of that, it feels specially flexible. There are many ways that one might try to experiment with the build. By adding more top-end Dragons we could get around our late-game problems. Just be careful to not add so many that it affects the deck's early game. Utvara Hellkite is one scary dude, specially when its tokens get double strike. Balefire Dragon is great at controlling the board and plays well with planeswalkers. Skyline Despot is kind of a hit or miss, but he has the potential to draw cards and make dudes.

Another possible addition to the list are extra combat steps spells. They are specially effective because often people will misjudge our damage and it's very easy to suddenly to burst people out with commander damage.

That’s it for this Epic Experiment! What do you think about this Voltron experiment? Please fell free to leave any suggestions in the comments section. Do you have any questions about the list? Which cards did you like? Which didn’t you? Was the Epic Experiment a success? Please let me know!