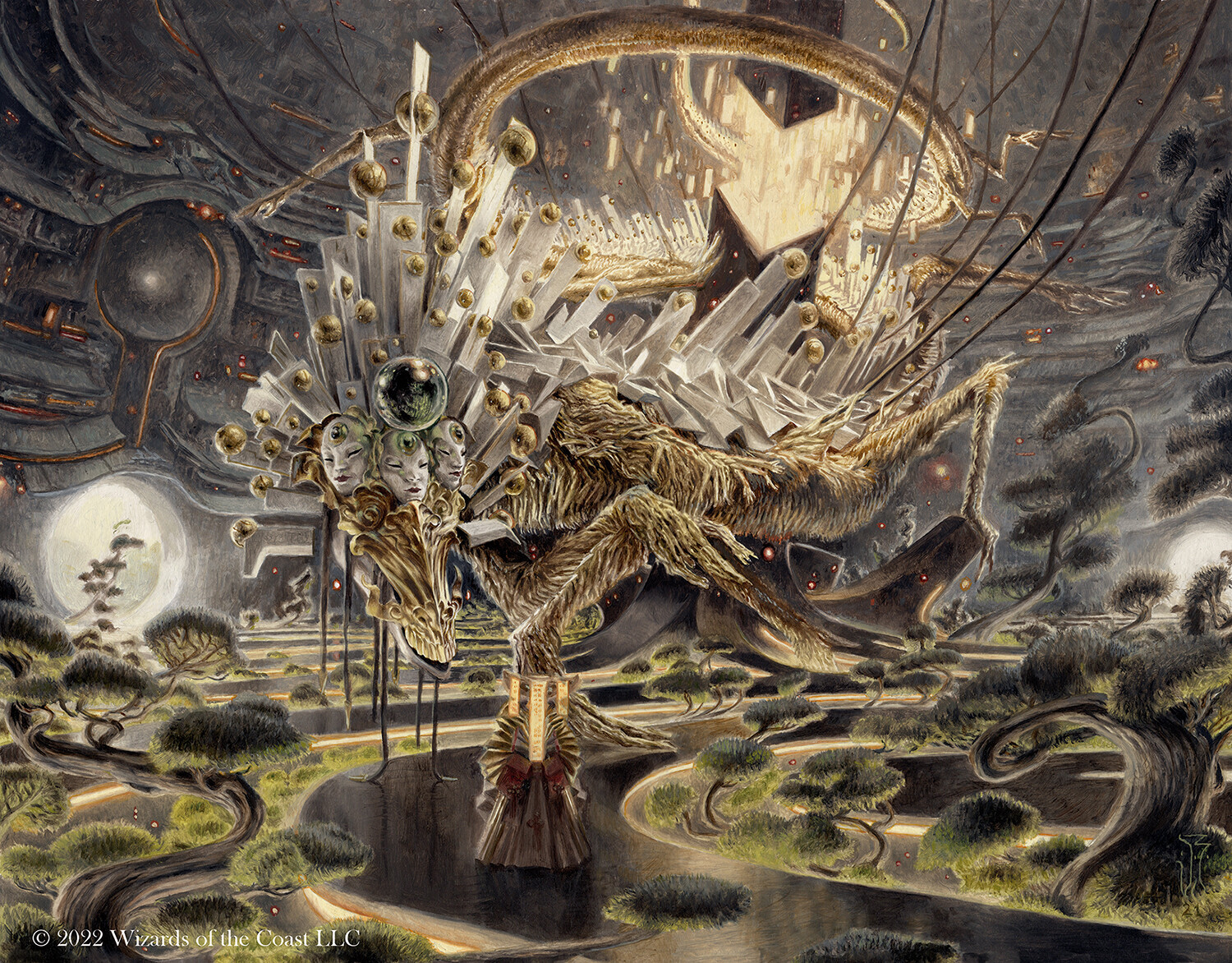 Kyodai is a very flexible commander, one that doesn't really lean in any particular direction and has a solid enough kit to be included in a number of archetypes. The ETB mileage may vary according to the type of permanent we're targeting; lands are pretty much irremovable while we have our commander out, but creatures are still pretty easy to get rid of. Given the vulnerability of the type, there needs to be a fast clock element to this deck (or else a heavy counterspell investment) if we want any creatures to become our indestructible targets. Otherwise, it's pretty easy for the table to gather two removal spells for Kyodai and its target, or to just use an exile effect.

The pump ability is expensive (and color-intensive), but it's very useful, and the Voltron aspect is great even for decks that aren't investing in it, providing a solid backup win condition.

Kyodai is also a great support commander for Companion builds. Since it's a five-color commander, we have more options to choose from. Zirda, the Dawnwaker + Kyodai might be my favorite duo to build around.

Having the ability to protect any permanent can be quite strong with the right kind of cards, so how about we build around cards whose only downside is the potential blowout of getting removed before they can make up for their investment? There are a lot of cards that fit this category, but I think the inherent safety of the Spellslinger archetype will help us with some much-needed consistency for Kyodai!

Spell-copying effects, like Swarm Intelligence, Thousand-Year Storm, and Cloven Casting, are a great way to pull ahead quickly. With a flexible suite of spells, it can provide a lot of options for each of our turns. Mirari's Wake is a powerful mana-doubler that can very quickly take over the game, given the sheer amount of extra mana it provides! Maelstrom Nexus and Sunbird's Invocation are consistent sources of two-for-one that slowly take over the game. There's even Song of Creation and Whirlwind of Thought, which are a bit riskier, but which each offer a more explosive payoff.

For spells, we're choosing a powerful suite of ramp and removal, with plenty of them being gold to be copiable with Cloven Casting. Modal spells are great to either copy or Cascade into, since they'll hardly be blanks. Treacherous Terrain is a powerful burn effect that can quickly take over the game if cast or copied multiple times, and Fevered Suspicion is another powerful addition that helps us get ahead.

The best part of building a battlecruiser deck like this one is that each threat packs a lot of punch without the need of a huge board. We do have a few Plan B threats to help us diversify, though: General Ferrous Rokiric and Shark Typhoon are great sources of tokens, which can be used defensively in the earlier portions of the game and offensively when we flip the switch. Kess, Dissident Mage and Elsha of the Infinite are two unconventional sources of card advantage, but they can play quite nicely with Kyodai. Zacama, Primal Calamity is a crazy powerful defensive threat that can allow for really powerful board swings while also providing a solid clock.

Since we're playing such a mana-intensive deck, I felt that this is a perfect shell to try out Jegantha, the Wellspring as a Companion. Sure, we lose a few powerful cards (like the Ultimatum cycle), but the extra consistency of always having a mana dork is invaluable. Jegantha also works great with our Charms and makes casting a big card and our commander on the same turn cycle much more manageable.

Having a nice suite of cantrips and ramp closes out our deck perfectly. These effects are necessary because they massively enhance our most vulnerable moment: the early game. They're also great cards to copy, and can really speed up our late game when we get things going.

We're looking to play the long game, and that means we should keep opening hands with some early control and ramp. We do have a few good early threats, like General Ferrous Rokiric or the cost-reducing bros, Baral, Chief of Compliance and Goblin Electromancer.

In the early game, one of our biggest priorities is developing a mana base that allows us to cast our spells. This might seem a bit obvious, but our deck is very color-intensive, and with cards like Abzan Charm and Galvanic Iteration, it'll pay off for us to take extra care and more deliberately craft our mana base to set us up for later success.

By the mid-game, when mana is no longer that much of an issue (and with Jegantha to smooth things out if necessary), we can start looking into playing some of our bigger threats. This is where having a ton of powerful instants is beneficial, as we can hold out playing spells on our turn and have the option to blank a destroy-based removal with our commander.

The late game is where we shine. Even with just one threat, we can take over a board. A single, indestructible Zacama, Primal Calamity or hard-to-kill Swarm Intelligence will dominate the battlefield with ease. Since Kyodai can flash into play at instant speed to protect these big baddies, the later half of the game is where our commander will truly shine, and totally fluster our opponents by halting their usual removal effects. With enough mana, Kyodai itself will be a surprise source of commander damage. Watch out, folks!

That was just my version of Kyodai, but other players might want to take this idea and make some tweaks!

The first change one might consider is cutting Jegantha out of the Companion slot. Without it, the list can get a bit more streamlined and gain the ability to include some other, more powerful cards, such as some Ultimatums. One could also exchange the Companion; the aforementioned Zirda + Kyodai pair seems like a very fun deck to mess around with, for instance. Having a pseudo-five-color Zirda gives us the chance to have cards that we normally don't, not to mention the extra protection, is always nice when around a non-commander card.

If both of these brews aren't your cup of tea, why not try out Infect-based strategies? Having a way to protect one of your threats provides an extra layer of consistency that we don't usually see for that strategy.