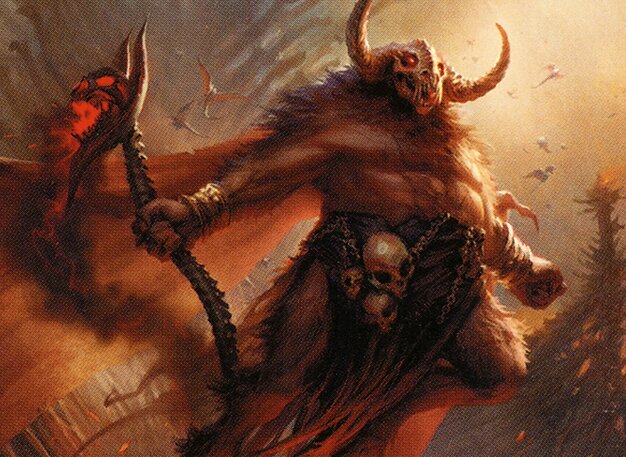 Today let's take a look into Orcus, Prince of Undeath, a somewhat underpowered commander. Don't get me wrong, it does have its moments, but this commander has a few obstacles in its design that tend to make it hard for it to shine.

So, let's switch up the formula and see what we can make work with Orcus!

Ball Lightnings are effective beaters that have the downside of being sacrificed at end of turn. They're very cheap to cast, and thus are great targets for Orcus' second ETB trigger. This'll be tricky for Orcus, since we'll have only a couple of opportunities to use our commander to bring back these kinds of creatures, but that means we're playing an exciting feast-or-famine strategy. What we lack in consistency we gain in sheer explosive potential, having the ability to dish double digit damage our of absolutely nowhere when our commander comes down and resurrects a pile of cheap, powerful, hasty threats.

Most of our beaters are Ball Lightning variations, like Arc Runner or Spark Elemental, but we have some interesting targets that are more noteworthy to discuss. Mogis, God of Slaughter is an excellent resilient beater that scales decently in multiplayer. Kroxa, Titan of Death's Hunger might not synergize at all with our commander (at least not the Escape part), but it's still a cheap threat, and we do tend to build a somewhat decent graveyard. Gadrak, the Crown-Scourge works both as an effective beater and a Treasure creator (more on that later). Its attack restriction isn't all that backbreaking since we're packing a few mana rocks and Treasure tokens, and we're more than happy to leave it on the battlefield giving us value.

Egon, God of Death is a funny card because it actively goes against what our commander is trying to do - load the graveyard. However, all we need is a cheap body that Orcus can revive and haste up! Combat Celebrant's potential to finish off defenseless players gives this card a tool boxy feature that is great for a recursion-based commander to have.

Red gives us access to some very effective support that allows our creatures to shine. While they're a bit on the expensive side and can be tough to find the right timing window to deploy them, they are the real deal. Dictate of the Twin Gods is a damage doubler that can be flashed in on the end step right before our turn, giving us even more explosive potential and some much-needed unpredictability. Berserkers' Onslaught is similar to any damage doubler effect, but we shouldn't take for granted its combat trick potential, which can be make blocking even harder for our opponents.

Meanwhile, Flameshadow Conjuring is an effective way to get additional value from our creatures. Not only do we get extra damage, we also get more value out of any potential Aristocrat payoffs we use, such as Pitiless Plunderer! The Flameshadow says to exile the token, but remember, many of the creatures we're copying, like Lightning Skelemental, will have their own end-step sacrifice trigger to make sure we do get the death triggers. Sarkhan's Unsealing is a great control tool for any deck that has the means to actually proc its damage triggers, and with a bunch of cards like Rotting Regisaur and Cosmic Larva, it turns out we can make that happen for very little mana!

Goldspan Dragon is a good beater that doubles the value of our Treasure tokens while also providing extra mana. Kalain, Reclusive Painter is a cheap creature that provides a Treasure token and a nice payoff for using them. Deadly Dispute, Unexpected Windfall, Pirate's Pillage, and Seize the Spoils are great mid-game plays that act both as a way to filter our hand and as a possible setup for a future turn.

In terms of opening hands, we don't want to keep anything too slow. Our goal is to start applying pressure to opponents with our Ball Lightning creatures on turn three. This will set the pace for our early game, keeping up a string of one-turn threats, and restocking our hand with draw spells.

In the mid game, we can start to look for opportunities to set up our commander's grand entrance. Extra Treasure tokens here and there will help tremendously with this. There are a few mana milestones that we want to keep track of throughout the game (the 7 mana milestone and 10 mana milestone are crucial ones, to help bring back a decent number of creatures), but it's also useful to know when to adapt that plan according to the game state.

In the late game, after we've deployed Orcus and he's caused some havoc, we can lose a bit of our oomph. We're never completely out of it, though; with so many hasty threats, and so many ways to make them more effective, such as doubling their damage or gleaning rewards from their sacrifices, our opponents always have to stay on guard for any other stockpile of hasty creatures we rush out later on. Given enough time and mana, replaying our commander will always be a big late-game blowout.

There are many ways to continue expanding and evolving the strategy from this point and I think that they tend to go towards three paths: beaters, payoffs, and subtheme.

There are many cost-effective beaters out there to try, and one in particular that got me very intrigued was Immolating Souleater. The life trade might seem bad, but when considering that we're a very aggressive deck, it's easy to see how losing life for additional damage could really pay off for such a swift strategy.

Evolving the payoffs part of the deck will likely depend on personal flair; one player might prefer the sheer power of Fiery Emancipation, while another might like the low cost of Impact Tremors.

Finally, a great subtheme for this deck to potentially explore further would be some Group Slug cards, like Manabarbs, which either slow our opponents down or make them lose a bunch of life. This, of course, accelerates our plans perfectly.