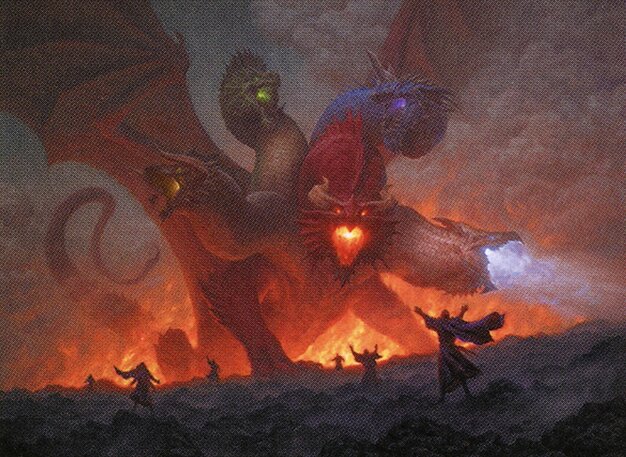 For this article, let's talk about the new, powerful, five-color commander with a humongous enters-the-battlefield effect that guarantees we won't run out of steam anytime soon. It's Tiamat time!

When Tiamat enters the battlefield, if you cast it, search your library for up five Dragon cards not named Tiamat that each have different names, reveal them, put them into your hand, then shuffle.

Tiamat seems like a better 99 card than a commander. Don't get me wrong, having access to such a powerful draw can be game-changing, and it allows for more ramp-oriented Dragon tribal builds, but, when considering the tempo advantage created by other Dragon tribal commanders, like The Ur-Dragon or even Ramos, Dragon Engine, it's easy to see what we're missing out on in the command zone.

If playing for combo, Tiamat feels a lot like a commander version of Dragonstorm. However, unlike Dragonstorm, which works as a finisher, Tiamat is more of a set-up card, still in need of ways to capitalize upon its ETB. To find that payoff, we could use massive reanimation spells, like Patriarch's Bidding, or perhaps use Tiamat as a simple way to fetch for both of the combo-oriented Niv-Mizzets (Niv-Mizzet, Parun and Niv-Mizzet, The Firemind) to pair with Curiosity effects.

It's worth noting that while Tiamat's ability is an ETB trigger, it only goes off if we cast it. This makes it that much harder to cheat Tiamat's effect, but it's still possible with cards like Dream Halls.

Flash-enablers are extremely valuable with Tiamat, because they let us avoid ending our turn with too many cards in hand and nothing to do with them all until our next untap step.

It's no surprise that Tiamat's high synergy list is filled with Dragons. None of the rest of the cards (both in the High Synergy and Top Cards sections) are particularly unexpected, all falling within the traditional mold of Dragon tribal or 'five-color goodstuff'.

Tiamat is a setup commander, and as such, building a deck around it means that we need to answer one simple question: how are we going to use the cards she tutors up? The answer to this question will reveal to us just how fast we're trying to go, which will illuminate the other tools we need to work down that path. Slower builds, for example, might be happy to just play one big Dragon per turn for five turns, while a combo-oriented deck will only care about one or two specific Dragons, causing the support pieces to become more niche and streamlined.

For our experiment, I'm interested in taking advantage of Tiamat's draconic influx by using the card Hypergenesis. Whatever she picks up, we get to put right down! While the symmetrical nature of Hypergenesis is usually a big downside, symmetry is not that big a deal if we're winning right on the spot.

Rather than wait for the Suspend ability, we have two ways to cast Hypergenesis. The first is to Cascade into it with cards like Violent Outburst. The second is to use cards that "free cast" it from our hand, like Kari Zev's Expertise.

Cascade has some heavy deckbuilding requirements. To guarantee our Violent Outburst cards always hit Hypergensis, we can't use any cards with a mana value lower than 3. This has an impact on our tempo, since this cuts off our two-mana ramp effects and restricts us to three-mana ramp cards. Luckily, this restriction can also come with a benefit.

Maelstrom Nexus isn't a Cascade spell, per se, but it does turn every other three-mana spell into a Cascade effect. With Nexus, our mana rocks aren't dead draws in the late game, and we don't have to wait to draw a proper Ardent Plea to start digging.

Building around a card that needs to be cheated out from our deck is always a risky proposition, because there's always a chance that we actually draw it, leaving us unable to Cascade into anything at all. "Free cast" cards are a nice way to avoid this awkwardness. As Foretold is usually a bit too slow to make an impact in most EDH decks, but for us, it's a high-value enabler. The "Expertise" cycle from Aether Revolt is also a great way to cast Hypergenesis.

So, which Dragons will Hypergenesis help us slam into play? Our Dragon suite is designed to be a one-hit K.O. Scourge of Valkas and Lathliss, Dragon Queen are the two most important pieces from our arsenal. Lathliss technically doubles up the number of Dragons we're playing, while the Scourge turns every single one of them into compounding, global damage. By the time Hypergenesis is done resolving and we begin to resolve all these draconic triggers, we'll be dealing more than 70 damage to each opponent.

As if that's not enough, Terror of the Peaks will deal a little less damage than the Scourge, but another damage-dealer prevents even our lifegain opponents from escaping our reign of fire. Utvara Hellkite and any haste enablers are a great complement to our burst of damage, providing a significant damage spike both in the short and long term. This can be important for us to make sure we're set up to deal combat damage against any enemy who manages to dodge our initial salvo. Finally, Moritte of the Frost will help us cover our bases by cloning any of our three nonlegendary Dragons. Two copies of Scourge of Valkas gets absurd very quickly.

Best of all, by slimming down the focus of our Dragon suite, we don't need to fill the deck with tons of big beasties. We can make more room for support pieces because our full plan only requires five or six actual Dragons!

Cheap Cycling cards are the glue that hold our deck together. Just like the Modern "Living End" deck, they provide cheap early-game plays that help us dig fast to find the mana or the combo pieces we need. We should always prioritize colorless over the colored ones, as they are less demanding on our mana base, but including a few colored can help us achieve a critical mass.

Our strategy requires us to find a means of free-casting Hypergenesis, but only after we've cast our seven-mana commander. This is a pretty challenging position, because we leave a window of opportunity that lasts one full turn cycle, allowing our opponents to disrupt or even gang up on us. Flash enablers are an efficient way to avoid this situation altogether, giving us the ability to cast Tiamat on the end step before our turn and adding more depth to our line of play.

Vedalken Orrery, Yeva, Nature's Herald, and Leyline of Anticipation are our baseline enablers, since they're simple and reliable, but there are some others to help here, too. Vernal Equinox's symmetrical nature can be a bit of a downside, but we can usually break this parity, and we really need as much extra flash as we can get. Vivien, Champion of the Wilds is a much cheaper alternative, but as with any planeswalker, there's always the risk of her getting removed before she can get the job done.

In terms of opening hands, we're mostly looking for a few ramp spells or some Cycling cards to help us get through our deck more quickly. Unlike many Cascade combo decks out there, we're never at risk of getting blown out by drawing our Cascade target, which is a very crucial element that helps the deck feel much smoother to play.

The early game is our setup phase. Here, we're looking to develop our mana or ruthlessly sculpt our hand to find one of our Cascade spells plus one of our flash enablers. While we're technically a combo deck, we still can play a pretty decent interactive game, because we have some technically high-mana cards that we can play with a low-mana input, such as Shriekmaw or Wear // Tear. Thus, we don't really need to rush.

By the mid-game, we should have gained an idea of which Hypergenesis avenue we'll need to pursue. Did we find a flash enabler? Did Hypergenesis wind up in our hand, requiring a free-cast spell, or is Cascade still the most viable option? With an As Foretold already in play, we don't mind casting Tiamat in the main phase, but otherwise, flash is usually the best way to go. We're kind of a one-trick pony, so disruption is disastrous, and we have to plan carefully.

The late game is a bit wonky. On the one hand, our 'combo' is an instant-win with direct damage. However, this evaluation is based upon the assumption that our spells and Dragon triggers will be allowed to resolve in peace. If Hypergenesis is countered, we'll have to cast our Dragons the old-fashioned way. If an opponent uses Teferi's Protection to avoid our initial damage burst, we'll have to resort to combat and pray we don't get board-wiped. We have a plan B, and a plan C, but they're much, much slower, which puts even more pressure on the timing of our primary strategy.

There are a few future upgrades I can see this deck evolving into down the line. As with any tutor-heavy deck, we could always try to build a toolboxy Dragon suite, using a few 'silver bullets' to help us in different scenarios. Bladewing the Risen, for example, is a great Dragon for removal-heavy games. Niv-Mizzet, Parun is great for counterspell-heavy lists while being able to can grind like no other. A card like Dragonlord Dromoka helps us avoid instant-speed removal and interaction.

Speaking of interaction, counterspells are a challenge to include in this deck, since the cheap ones get in the way of Cascade. Perhaps the deck could stand to lean more blue by including free counterspells, like Fierce Guardianship, allowing it to combo off more safely. Oh, and there's also Eureka, the OG Hypergenesis card. Redundancy is greatly appreciated, but because of its price, I chose to leave it out of the list.