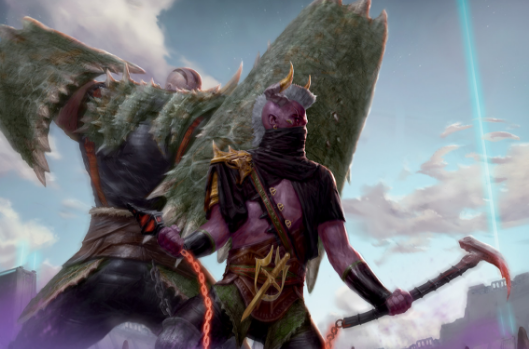 Good Morning, EDHREC! I’m Bernardo Melibeu and this is The Epic Experiment, a series where we throw all common sense aside and experiment with some unusual cards, effectively changing how we normally build our deck. Is it going to work? Who knows?! We’re making science here. When you’re an Izzet mage, blowing things up in front of your own face is half the fun.

In this article we're going to look at the Golgari-colored duo from Battlebond, Virtus The Veiled and Gorm The Great.

First, we need to understand our commanders, so let’s take a look at their abilities: When Virtus the Veiled deals combat damage to a player, that player loses half their life rounded up.

With that in mind, let's go to Virtus and Gorm's EDHREC page and see how folks normally build them.

We can see that a lot of slots are dedicated to either make Virtus hit harder (via double strike and on-hit procs), for for Virtus to become unblockable, or to make all creatures block Gorm.

Aside from that, the rest is pretty straightforward ramp, draw, and removal.

The one thing that caught my eye while analyzing this partner combo was the combination of combat support, offered by Gorm, and the extra reach, offered by Virtus.

As mentioned before, Virtus and Gorm are well suited for supporting creature-based decks. Elves are a perfect fit for the pair, since they're a very explosive tribe that tends to go wide, often having to rely on Overrun effects to get past blockers. Gorm's ability very often implies unblockable Elves in the mid-game. Part of the explosiveness of Elves is due to their unique unrivaled ability to generate mana through small mana dorks. Cards like Llanowar Elves, Boreal Druid, and Elves of Deep Shadow help us get started, while Priest of Titania, Elvish Archdruid, and Wirewood Channeler combined with a moderate board let us snowball to victory.

Since we're trying to race to an overwhelming board, we need to see lots of cards, and for this we have tutors and card draw.

The number of tutors is somewhat limited in this list, but the few that are included are very powerful. We have cards like Elvish Harbinger and Skyshroud Poacher that find us an Elf card of our choosing, while still being a creature. Diabolic Intent does a reasonable Demonic Tutor impression and is great at finding answers that aren't so easily available. There's a small package of useful tutor targets that consists of Craterhoof Behemoth for game ending one-shots, Terastodon for removal, and Regal force for a hand reload. While not as explosive as Craterhoof Behemoth, Thunderfoot Baloth does a better job over multiple turns. For card draw we have 3 types: "static" card draw, on-cast card draw, and on-board card draw. The first type isn't board dependent, and because of that, it is more reliable when things starts to go bad. Cards like Sylvan Library and Elvish Visionary represent it this idea really well. The second type needs more setup; they're overall bad as late game top decks, but they also dig deeper for a longer period of time. Vanquisher's Banner and Lifecrafter's Bestiary are some of the cards we have in this category. The last type draws cards based on the current board state, and because of that it's the most explosive of the three. We currently have Regal Force and Kindred Summons for this type of advantage. It's important for our deck to strike a balance between those different types because each of them have their own strengths and weaknesses. The first generally draws less cards than the others, the second one gets worse if played too late, and the third has some aspects of "win more" effects, which mean they're good when you're already doing well, but do not help you as much when you're behind.

Another thing we have to worry about is being blown away by board wipes. This is where the black cards of our deck truly shine. Prowess of the Fair lets us rebuild right after having a creature die. Wretched Confluence can serve as a one-shot recursion effect while also being flexible as removal. Phyrexian Reclamation lets us continually return creatures to our hand (though the mana requirement is more demanding than it looks). Finally, there's No Rest For The Wicked, an enchantment whose self-sacrifice I like to compare to Seal of Primordium, and which I therefore like to call, "Seal of Middle Finger to Boardwipes." For finishers, we have a variants of similar cards. Torment of Hailfire + lots of mana can be lethal really fast, and if it's not, at least it allows both Virtus or a possible follow-up attack by the team to do serious damage. Craterhoof Behemoth/Overwhelming Stamped + a big board is often all we need to finish the game on the later stages, while Ezuri, Renegade Leader/Thunderfoot Baloth will probably need a couple of turns but can also get the job done.

Our game plan is simple: deploy early mana generators, build a giant board, and kill opponents with it. Easy, right? No! We have to always think about the risk and the reward when building our board, especially if we don't have a draw engine. Sure, there're cards like Wretched Confluence that can help us rebuild after a board wipe, but they're still slowing us down.

One of the benefits of having Virtus as a commander is that, while not part of our general game plan, there's always the imminent threat of an attack on a unguarded opponent. This means that we can always cast him, since his absence won't be missed and may even bait some removal.

There were some on-theme infinite mana combos involving multiple mana generators and untapping equipment, but they were left out in favor of classic Elfball cards. They could easily be included, since tutoring for them or for a mana sink is very easy in black. Adding more generic tutors would be also something to consider when including those combos, so if this partner pair isn't evil enough for you, go nuts. In the early game, the most important part is to develop our resources - usually mana followed by card draw. After the initial burst we may end up empty handed, but this is where our Virtus the Veiled comes in handy; we may play him just for a quick poke. Alternatively, if we have the conditions for an all-out attack, we can cast Gorm the Great as his ability very often means that there won't be any blockers in our way.

By the typical mid-game point, we have some chance of actually ending the game quickly with our life-chopping commander and aggressive board. However, if we don't end things, we'll need to start worrying about board wipes and retaliation attacks. By this point we need to focus on drawing more cards or ways to recur dead creatures. This is where showing some restraints is rewarded. We don't want to look too threatening if we can't finish someone off or finish the game entirely.

When we're in the late game, we should focus on quickly eliminating the remaining players. Note that by this point, playing Virtus after a wipe is a good opportunity to hit the most threatening player with the most life. Torment of Hailfire becomes better than Exsanguinate, and even without a board, it can get devastating.

As I said in previous articles, this list is experimental and there's a lot of room to better suit your specific meta. Do they tend to overplay board wipes? Maybe more cards like Twilight's Call and Akroma's Memorial are better suited for the job. Need a faster clock? Adding Triumph of the Hordes or Exsanguinate can increase the threat density of the deck. Are creatures the problem? In Garruk's Wake can clear a board while maintaining your own. Increasing the numbers of tutors can also help you fight that specific threat.