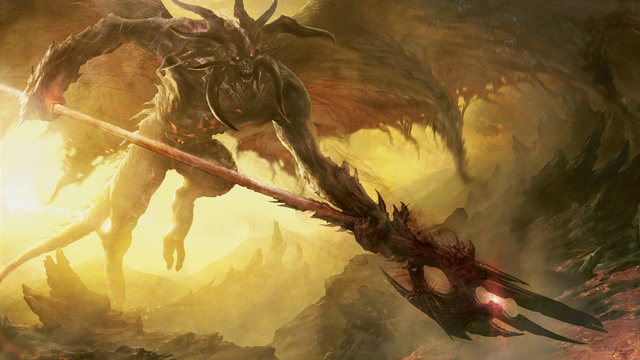 Who Needs the Color Pie, Anyway?

Welcome back to Forgotten Harvest, where we give cards used in under 300 decks here on EDHREC their due. This time, I'm continuing the pattern of tackling mono-colored decks, and making good on a request from reader @WilliamLordSith for a Nefarox, Overlord of Grixis deck at the same time.

However, this isn't going to be your typical mono-black deck. No, we're going for something along the white/green persuasion. We're blowing away all expectations of what colors mean with an off-color enchantress deck.

Let's break it down into three sections:

What Nefarox and Black Do Well

There are two key features to Nefarox: Exalted and creature removal. Focusing on the former, black has a few cards that support keeping the creature count to a minimum. Demonic Rising (176 decks) and Homicidal Seclusion (169 decks) are two enchantments that can help out when we're rocking a solo Nefarox, the former providing a nice 5/5 Demon, and the latter buffing our lone creature and gaining us back some life. Given the heavy enchantment theme planned for in this deck, these are quite powerful.

Of course, any black deck isn't complete without some creature removal. Nefarox's attack trigger is a great way to eliminate troublesome attackers on the other side of the table. This deck includes a typical removal package for black, including Damnation, Go For the Throat, and Profane Command. If you decide to give this deck a try, I highly recommend customizing this portion before doing further deck editing. I'm admittedly relying on my favorites for removal, but tinkering is required to find the absolute best cards for the job. You may prefer Decree of Pain and Shriekmaw, and that's totally fine.

It's safe to assume, with Nefarox at the helm, that opponents will be losing a lot of creatures. Therefore I looked to add Auras that would provide some extra pain when their creatures hit the bin. Cards like Chime of Night and Dying Wail from Urza's Destiny both fit that criteria, and see play in 47 and 18 decks, respectively.

Similar to Chime of Night, Funeral March (30 decks) can help with a cascading creature loss. Speaking of cascades, Screams from Within is king, frequently ripping through token decks like tissue paper, while only making it into the sleeves of 142 decks. When looking to cause some life loss, Banewasp Affliction (45 decks) gets the job done nicely. Finally, the highly political card Parallax Dementia can be a great bargaining chip when players A and B want to gang up on player C for a turn. This Nemesis common sees play in a whole 7 decks, which I think is far too low.

Not all of our Auras have to be anti-creature. Some of them can help pump our Nefarox, get his commander damage through, or protect him from death. One of the best Auras to protect your whole enchanted team is Necromancer's Magemark from Guildpact (80 decks). While you'd lose any Auras attached to your creatures, getting those creatures back is just fantastic! Speaking of which, Shade's Form is an excellent False Demise for black, allowing you to steal an opposing creature when it hits the bin. The buff on the creature only helps to add to the political benefits of the card. I'm shocked it's only played in 274 decks.

Sadistic Glee (263 decks) and Ordeal of Erebos (188 decks) can give our creatures a more permanent boost after enchanting them. Inner Demon, played in 73 decks, provides a pump, some evasion, as well as a small board wipe. Also giving some evasion, Dragon Shadow (295 decks) can make your creature fearsome over and over again. Assuming the creature can connect, Cloak of Confusion from Ice Age does some great "hand management" to disrupt our opponents, seeing play in just 16 decks. Lastly, another source of hand disruption, Strands of Undeath (50 decks) provides a regenerative shield to protect the lucky creature it lands on.

Since we're playing so many Auras, it's probably a good idea to include the black Constellation creatures: Grim Guardian, Agent of Erebos, Thoughtrender Lamia, Doomwake Giant, and Dreadbringer Lampads. The Lampads get special mention, as they're only played in 298 decks. There's a suite of other powerful enchantment creatures also in the deck, along with Blightcaster, which has honorable Constellation and sees play in 274 decks. With all this enchantment-fall, you'll be happy to set off that Screams from Within chain for sure!

One final creature that I should talk about, even though it's not enchantment-based, is Xenic Poltergeist. This Legends card has become a favorite of mine for black decks that have trouble handling artifacts. This can make a Paradox Engine into a 5/5 for one go around the table, making it susceptible to Damnation or any other mono-black creature removal. Right now, it only sees play in 161 decks, but I want to see that number creep higher.

There are four colorless cards worth mentioning that add greatly to the black enchantress theme. First, we have the all-star Skull of Orm, capable of resurrecting our spent Auras for their reuse. Crystal Chimes fills a similar role, though it's only a one-shot.

Of note in the "under 300" club, Crown of the Ages helps to swap Auras among creatures. This will help you get the most of the enchantments, in case their host is about to say goodbye, or maybe it'll help get that Chime of Night on the creature that's about to bite it. Plus, with all these auras targeting your opponents' baddies, Arcane Lighthouse can help make sure that hexproof and shroud won't get in the way.

In Brightest Day, In Blackest Night...

I hope you all enjoyed this attempt to throw the color pie out the window. I promise this won't be the last time I try to break things. Do you have any ideas for how you would like to mess with the color pie? How about any cards used in 300 decks or less on this site that you'd like to see featured? Leave me your thoughts on this and more in the comments. As this article proves, I love working off of reader suggestions and challenges, so let them fly! Next time, we'll continue the mono-color pattern with a preventative take on green!