Grapple with the Past – Born of the Gods

Greetings, everyone, and welcome back to Grapple With the Past, a series in which we look back at the set pages for old releases to discuss the cards that made it and the cards that fell into obscurity in EDH. Once a set releases, Commander players write and read reviews, test out the new cards, and incorporate winners into their EDH repertoire. But with the constant stream of new products, it’s easy for cards to slip through the cracks. I’ve found that by exploring set pages on EDHREC, I frequently stumble upon cards that could easily find a spot in one of my decks. In this series we look for irregularities in the data, try to identify sleeper cards from formats past, and discuss the legacy of particular sets in Commander. Today, we continue our foray into the least-played sets of the last ten years in our format.

Born of the Gods had a few things working against it. It was a small, middle set from the old block structure. Not only that, but it released in a time when Wizards still hadn’t really plunged into designing for EDH in Expert-Level sets. Even the marquee keywords of the set play best in Limited: Inspired, Tribute, and Heroic have never been high-performing abilities in our format.

That being said, there are a few notable aspects of this release. First, this was the first appearance of multicolored Gods, which are now popular and expensive cards for EDH. Then, there’s the cycle of Archetypes, many of which are still decent for Commander, with the only real dud being Archetype of Finality. There are bright spots here, so let’s try to find them.

The Commander options on display here really are a highlight. Four of these seven generals appear in more than 1,000 decks! The majority of releases don’t post those kinds of numbers in this category. Most of this is attributable to the power and popularity of Gods as commanders.
At the top of the list is the mill God, Phenax, God of Deception. For a long time, this was the de facto general for the mill strategy. If Wizards keeps supporting the archetype, however, I might expect Phenax to see a dip in popularity in favor of Bruvac, the Grandiloquent. My favorite among these options is Xenagos, God of Revels. Six years on, I still shudder when I sit down across from a Xenagos player. This commander is still EDH royalty in my mind and gets my vote for best Gruul commander. I wasn’t expecting to see Karametra, God of Harvests above the 1,000-deck benchmark, but looking at her page, it starts to make sense. She seems like she could helm a scorching-fast ramp deck that will thin the deck and lead to big X-spells or Eldrazi.
Mogis, God of Slaughter is notable to me as a fun Group Slug commander. But the real point of conversation here is Tromokratis. This is one of the worst commander options I’ve seen in a long time. At first I thought it had the text of Lure, and I almost got excited. If all creatures able to block it had to block it, you could maybe assemble a janky deck centered on using this guy to soak up blockers in order to force other creatures through. In reality, this commander has no direction. I know this wasn’t designed for EDH, but it is abysmal within our context.

The top 10 for this set is probably where it shows its age the most. Some of the Gods show up here, alongside a couple of Archetypes, but there’s nothing that I would really consider a format staple. 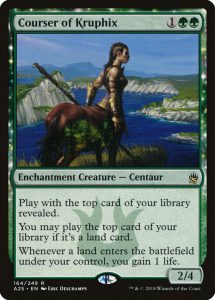 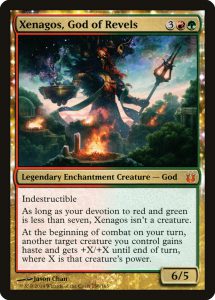 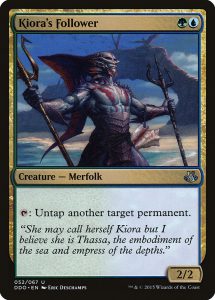 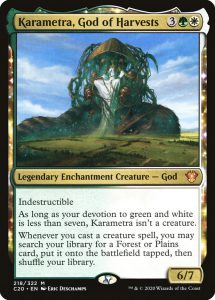 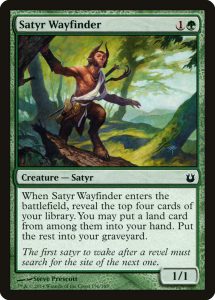 The closest that Born of the Gods comes to a staple is Courser of Kruphix. This green card advantage effect is one half of Oracle of Mul Daya and earns its spot at the top of the list. I’m not a huge fan of Courser of Kruphix, so I don’t play it frequently, but if you’re looking for a light Future Sight effect in green, this’ll do the trick. Kiora’s Follower is an awesome card that has extra utility as a mana dork, perfect for commanders with tap abilities such as Vorel of the Hull Clade and Prime Speaker Vannifar. Satyr Wayfinder, on the other hand, is an acceptable way to fill the graveyard. It’s not amazing, but it’s fine for Muldrotha, the Gravetide and Kathril, Aspect Warper. 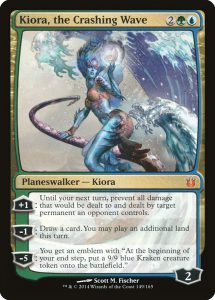 Kiora, the Crashing Wave is a strange entry at number six. The -1 ability is really good, but this planeswalker only starts with two loyalty and its ultimate costs five loyalty. It doesn’t even play well with Doubling Season. I like the card, especially the art, but its spot on this list is a bit perplexing. Seeing as her number one commander is Arixmethes, Slumbering Isle, I’m guessing she sees play mostly in the Sea Creatures archetype. Ephara, God of the Polis is one of my favorite Gods from Theros. This card is a great card advantage engine in blink decks. Outside of that application, however, she probably has little utility. Finally, we have two Archetypes in the top ten. I’m not the biggest fan of Archetype of Endurance because it costs eight mana, but I can imagine it as a tech card in decks that cheat out creatures such as Atla Palani, Nest Tender. The real winner here, though, is Archetype of Imagination. On a cluttered board, this ends the game. Don’t be fooled, this card is good.

I don’t know if Perplexing Chimera is a good card or even a fun card, but it can definitely stall out some games. This is one of the most annoying cards for Commander, and I’ve never enjoyed playing against it. Taking it for what it is, this card acts as a deterrent to anyone who would play any high-value spell at the table. Archetype of Aggression just got nudged out of the top 10, but it might be one of the better ones. While removing trample from your opponents’ creatures might only be relevant under special circumstances, there aren’t many cards that give your entire team trample. This is the type of card that is perfect for Xenagos, God of Revels. Finally, I love Whelming Wave. Four mana to clear the board is great, but it’s even better in Sea Creatures decks, such as Arixmethes, Slumbering Isle, where you can break the symmetry of the card.

Next, we have a few removal spells that seem decent. Four mana is a lot to pay for single-target removal, but black decks have very few ways to actually exile creatures. Combined with the Gold token that comes with it, Gild isn’t a bad inclusion if you find yourself in a meta with plentiful indestructible threats. Fall of the Hammer is the rare fight offshoot that doesn’t damage your own creature and is best with mono-red commanders that are already pretty chunky, like Ilharg, the Raze-Board. Fated Retribution is a worse Rout. Some may say that seven mana is too much for a board wipe. Most of the time, I agree. But in an Azorius control deck, Rout and Fated Retribution might have a place.

Sometimes, my EDH preferences bubble up in my articles, and nowhere is this more apparent in how I evaluate enchantments. I love enchantment decks, and Karametra’s Favor sounds my enchantress alarm. Now all I’m thinking about is playing this on my Verduran Enchantress, drawing two cards, and having a mana dork for the trouble. Sanguimancy probably isn’t great, but it does have a very high ceiling for mono-black decks.

That was that. Which Theros-based set is your favorite? What about your favorite Theros God? Do you miss the old three-set block structure? Sometimes I do. Are there any cards from Born of the Gods that you might try out now? Let me know your thoughts in the comments below!

Remember to EDHREC responsibly: always dig a little beyond the statistics. I’ll see you all on down the road.