How to Play the Planar Portal Precon in EDH 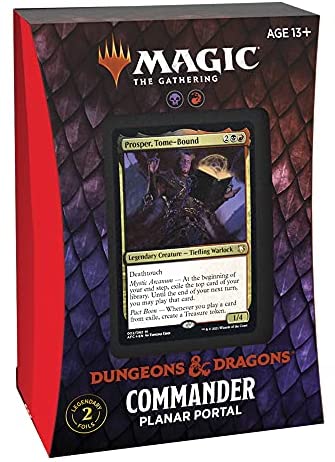 This is the comprehensive guide to playing the Planar Portal precon, helmed by Prosper, Tome-Bound! This guide holds all the secrets to piloting Planar Portal to victory straight out of the box. 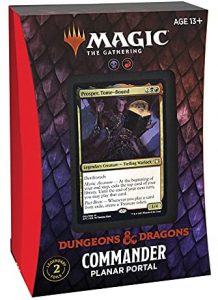 Planar Portal’s main strategy is to utilize Prosper’s treasure-making ability to snowball into explosive turns of spellslinging that generate large boardstates and overwhelm its opponents.

One of the deck’s greatest strengths that allows it to build up to these large turns is its ability to generate card advantage. At the precon level, Prosper’s Mystic Arcanum ability by itself can vault the deck ahead of others at the table. This deck contains eight artifacts capable of ramping him out a turn or two ahead of schedule, and once Prosper’s Pact Boon treasures start getting made, paying his commander tax gets even easier, and the snowball begins to roll down the hill. As a result, hands with early ramp should work to get Prosper down as soon as possible.

This deck also has other methods of obtaining 2-for-1’s and staying ahead of the table on cards while also making treasure tokens with Prosper in play:

The other strength of this deck comes from its efficient and plentiful removal.

The deck accels at drawing cards, generating mana, and answering key threats from opponents, but it also comes with weaknesses.

Planar Portal does not come out of the gate swinging like other precons can. It wants to take its time building up to larger more overwhelming plays, and the deck’s speed can be further slowed if the other decks at the table present consistent answers for Prosper before the treasure train can leave the station. The deck won’t be attacking with big creatures. In fact, this deck only contains 7 creatures with power 4 or higher, and some of them are too crucial or fragile to ever send into the red zone.

Unfortunately, this deck’s noncombat finishers are few and far between.

Pontiff of Blight and Marionette Master are this deck’s only reliable noncombat game-enders when “going off” with treasures and casting spells from exile. They’re extremely efficient and will end games quickly, but with almost no reliable alternative win conditions, they need to be protected and withheld from the board until they can dish out serious damage. Situations can arise where this deck achieves all its goals but struggles to close out games because these cards are nowhere to be found. Oftentimes, the other decks at the table can gang up on Planar Portal if it stumbles for a few turns after becoming a target. It’s pretty awkward for a deck to paint itself as a villain and then not be able to capitalize.

On the opposite end of the power spectrum are cards that could be detrimental to the deck’s gameplan when cast at all. Every precon has subpar cards in it, but these three should be noted in particular:

There are also cards in the deck that stray far away from the theme of the deck, and detract from the power. They can lead to awkward opening hands, and if there are too many of them, a mulligan might be in order.

Keeping in mind which cards to hold, which to deploy as soon as possible, and which to avoid will give the Planar Portal deck an edge and help it close out even more wins than it could have otherwise.