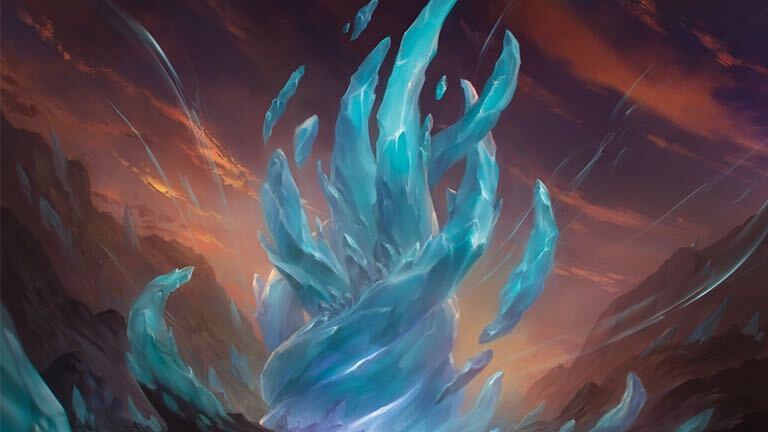 (The Ozolith | Art by Sam Burly)

Welcome to the colorless and lands portion of the Ikoria: Lair of Behemoths EDH set review. This set has been absolute crazy, and since it's a heavily multicolored set, there aren't too many colorless cards for us to tackle here. Still, there are a few that deserve a moment in the spotlight. I'll be covering the colorless and artifact cards, and my fellow writer Elijah Klein will wrap up this review with some notes about Ikoria's new lands!

Crystalline Giant is the kind of card that doesn't scale well into the Commander format. The reliance on the combat step triggers, while definitely better than the usual upkeep triggers, is still quite a hefty price for an ability that is the textbook definition of unreliable.

Let's take the Frankenstein's monster out of the bag. How is Crystalline Giant in a Mutate deck? It could give the mutated creature tons of new abilities. However, many of the mutating cards we've seen already give us the keywords we're looking for. How about Kathril, Aspect Warper? Well, it really wants a high density of creatures that have these abilities naturally, so that's also probably a "no". I suspect its primary application will be in an Odric, Lunarch Marshal deck to help provide keywords to the whole team, not just to itself, though Odric players will have to determine whether they're alright with the randomness.

The Ozolith is a versatile, cheap, and powerful enabler. The more I look at it, the more uses I find for it. This card is a straight-up format staple, simply by virtue of being cheap and generically useful.

One of the most impressive things about the card is that it's a leave-the-battlefield trigger, not just a death trigger. Amazing, right? Let's take a quick look at some of the possible uses.

+1/+1 counter decks will flourish with The Ozolith, storing the counters up if their creatures die to redeploy when they find a new creature to put them all onto. Marchesa, the Black Rose already loves to put counters on her creatures and kill them off, giving her even more benefit. Ezuri, Claw of Progress dishes out lots of counters and won't mind storing them here. Reyhan, Last of the Abzan's effect is basically doubled here.

Did Animar, Soul of Elements leave the field? Store his counters safely here until he comes back. Elenda, the Dusk Rose unhappy about being a 1/1? No longer! Make sure your Hallar, the Firefletcher, Mowu, Loyal Companion, and Licia, Sanguine Tribune never have to restart at square one ever again. Hydra decks also tend to have tons of counters, so Zaxara the Exemplary and Gargos, Vicious Watcher might keep their ears perks up for this one, too! The new Nikara, Lair Scavenger and Yannik, Scavenging Sentinel is all about creatures with counters leaving the battlefield over and over, providing nothing less than a feeding ground for The Ozolith. Double dip with Doubling Season to put even more counters onto it, and even more counters when you put them back onto creatures!

Using -1/-1 counters for The Ozolith might sound counter-intuitive, since it triggers when our own creatures die, and putting -1/-1 counters on our own creatures sounds like a bad idea, right? Well, there are plenty of commanders who have the tendency to put -1/-1 counters everywhere! Hapatra, Vizier of Poisons especially likes this since it can become quite the powerful combo coupled with either Nest of Scarabs or Blowfly Infestation, or both! The Scorpion God might be able to use this, too, loading up counters on his own creatures to draw cards, then putting them onto The Ozolith to fire them off at an enemy.

And of course, Kathril, Aspect Warper introduces new types of counters to Commander, which can also be loaded onto The Ozolith, throwing tons of keywords onto your creatures over and over. This artifact makes those keywords basically permanent, which is a big buff.

Those aren't the only strange counters The Ozolith can use, though. Athreos, Shroud-Veiled can distribute more coin counters if his creatures leave the field, which is very handy insurance, indeed.

In summary: this card is good.

We've got our hands on a new wedge-based mana rock cycle, the Crystal cycle. These mana rocks tap for any color in their respective wedge color pair, and have the added Cycling option for two colorless mana. How do they fare against other three-drop mana rocks like Commander's Sphere, Chromatic Lantern, and Coalition Relic?

Well, not great. On the battlefield, they're basically a worse Manalith. The strength really has to come from the ability to cycle these rocks away if you don't want them. This flexibility seems good, but even then it seems to fall short. Commander's Sphere is much more flexible, and I've played enough Mind Stones and Hedron Archives to know that mana rocks feel best when they can be played and cracked for cards after they're already on the field, not before. These Crystals remind me more of the Khans of Tarkir Temur Banner cycle, which aren't very popular at all.

Definitely play Raugrin Crystal in Gavi, Nest Warden, or any of these if you have a multocolored Cycling deck, but these mana rocks feel like they're not destined for success, given how crowded that three-drop mana rock spot is already.

Pilgrim's Eye just got an adorable, almost-functional reprint. Farfinder trades flying for vigilance, which turns out to be pretty bad on a 1/1 body. The worst part, though, is that Farfinder is not an artifact. This helps it avoid random Vandalblasts, but is mostly a downside, since many decks like to take advantage of a creature's artifact-ness, such as Daretti, Scrap Savant.

I think the best application for Farfinder will be for Shirei, Shizo's Caretaker decks that want another land-fetcher. The biggest strength of this card is ultimately its art - it's dang cute.

Hello! We interrupt your regularly scheduled set review to bring you a new writer! Bernardo covered the colorless cards above, but I'm taking over now! My name is Elijah Klein, and I really want to talk about Ikoria's new lands. There aren't too many in this set, but they'll definitely impact the landscape of Commander, so let's get into it!

Colorless Edlrazi decks have a fun new land to use, which is great since they don't have many colorless spells to help them draw cards. Mono-colored decks can also take advantage of this one, such as God-Eternal Oketra, Neheb, the Eternal, or Rhonas, the Indomitable. Boros famously loves to get more forms of card advantage, so Firesong and Sunspeaker or Brion Stoutarm may like this extra utility, and since many Boros decks are built around Equipment, like Akiri, Line-Slinger, there's even more opportunity there. I also like this in Nikya of the Old Ways since she restricts the typical card advantage spells, but is happy to use good lands.

This value also gets multiplied with effects like Seedborn Muse, Wilderness Reclamation, and Sword of Feast and Famine. A colorless land can be a drawback in a deck with too many colors, but card advantage on a land is just solid. We've seen it before on cards like Arch of Orazca, which sees play in over 8,500 decks, and for my money, Bonder's Enclave is a much better rate. Expect this one to outpace Arch's popularity in due time.

While most were expecting this set to complete the cycle of Amonkhet lands, such as Sheltered Thicket, what we received instead took us all by surprise. Tri-color lands with basic land types that can also be cycled away for three mana. Tri-cycle lands!

These are, of course, an obvious upgrade from the Frontier Bivouacs of the world, though their price may restrict access in Commander right away. These will have a pretty resounding impact for multicolored decks, though. Fetching one of these with a Flooded Strand, Farseek, Skyshroud Claim, helping smooth out Checklands like Sunpetal Grove which search for land types, increasing the potency of cards that card about land types, like Collective Restraint... wowza, that's good fixing.

Oh, and they can be cycled away if you draw them late-game. It's a hefty cost, so it might not happen all that often, especially since these will probably be some of the first lands people fetch for at the start of the game, but it's a lovely option. These are new format staples, no two ways about it!

Then I realized the broader implications of moving loyalty counters around planeswalkers. Activating ultimates a turn sooner than people expect seems very good, indeed. Atraxa, Praetors' Voice loves some planeswalkers, though the colorless land in a four-color deck that also already plays Karn's Bastion might prove difficult for some.

Some commanders will enjoy the versatility of moving their own counters onto enemy creatures, too. Hapatra, Vizier of Poisons can take off any incidental counters on her own creatures to put them onto an opponent's creature. Volrath, the Shapestealer can move excess counters on his side of the field to an enemy, to help copy more cards, as can Experiment Kraj.

Also of note, activating this to move a +1/+1 counter with a Hardened Scales in play does help you move things incrementally upward, which is maybe low-key for Commander, but still a cool bonus.

Also, from the rules I can find about keyword counters, they give the ability to any permanent they're on, not just any creature they're on. So you can give hexproof counters to your valuable enchantments, or deathtouch counters to a Caltrops, and so on.

Which means there's one trick I absolutely need to pull off in Commander. If I have a lifelink counter on one of my creatures, from, say, Vitality Hunter, and then I use Nesting Grounds to move that counter onto my Aetherflux Reservoir....

The Hatchlings are Coming

We hope you enjoyed this colorless review of this very multicolored set! Now we want to hear from you! What are your impressions of the set, and where would you put these artifacts and lands? Which cards are you most excited for? Let us know in the comments below!