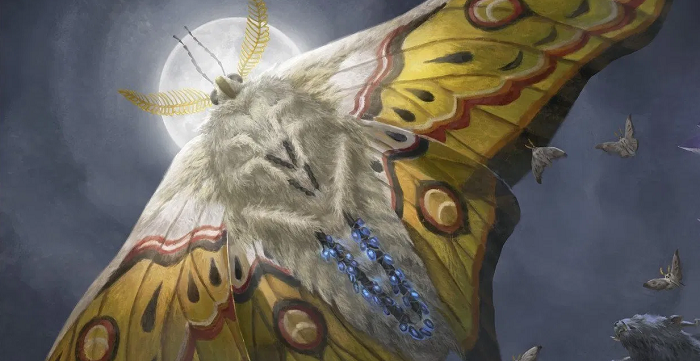 Hello everyone, and welcome to the white set review for Ikoria: Lair of Behemoths! The plane of Ikoria is home to many large, fearsome beasts, and many Humans casting huge, splashy spells. Many of those things may be multicolored, but that is not to say that there are no interesting mono-colored cards to discuss! Let’s get to it!

Of all the cards from Ikoria, this is almost certainly the one you’ll be seeing and playing most often. You could probably dedicate an entire article to all of Luminous Broodmoth‘s various combos and interactions, but I’m not here to do that. I will say that there are, generally, two ways you can play with this card. You can play it fairly, loading up your deck with a bunch of creatures that don’t fly (hopefully with solid ETBs like Eternal Witness, Wood Elves, and Sun Titan) and attack with abandon, forcing your opponents to block and getting your creatures back when they die, except this time with evasion. You will see it played like this some amount of the time, and it’ll be fine, even approaching very good.

The second way you can play it is, of course, unfairly, which is where things get exciting, specifically with cards like Solemnity. Solemnity denies the creatures the flying counter, meaning that, with a free sacrifice outlet, you can generate infinite death triggers (Blood Artist, Zulaport Cutthroat, and friends), as well as infinite leaves- and enters-the-battlefield triggers (Corpse Knight, Angel of Serenity, Daxos, Blessed by the Sun, etc), and, of course, infinite mana from a Phyrexian Altar. Not bad for a mono-white card!

My favorite combination of cards so far is Luminous Broodmoth, Solemnity, and Fanatical Firebrand, which instantly kills your opponents, though Fanatical Firebrand is far from the only card that works this way. You could also do the above with Sling-Gang Lieutenant, Goblin Firestarter, or Mogg Fanatic, to name a few.

This creature is mostly notable because it’s a Cat, and Cat decks currently play a lot of subpar Cats. A 3/5 lifelinker for four mana is already better than some of the cards currently residing in your average Cat deck, but the ability to create tokens is the main reason you’d want this. I think you’re most likely to only get a single Cat-creating trigger out of this, but in a Mutate-themed deck, you’ll be able to up that number significantly. Most Mutate stuff is Sultai, though, so you’ll have to stretch a bit for that.

There has been a bit of noise surrounding this card, mostly because of how it interacts with the command zone. Since it’s not being cast from hand, Drannith Magistrate blocks all other players from casting their commanders. It’s also asymmetrical, only applying to other players. I do think that it’s important that cards like this exist to serve as a safety valve against powerful strategies. As always, talk with your group. Some groups will likely be vehemently against this card (especially if you have someone that likes to get up to hijinks with Knowledge Pool and Possibility Storm), but I think it’s a perfectly fair card, for three reasons.

Firstly, your average deck can likely operate without its commander. It may not be optimal, but you’ll still be able to play the game. Secondly, this combats powerful strategies such as Storm and Food Chain. Thirdly, Drannith Magistrate is a 1/3 with absolutely no protection. I don’t want to always be the “run more removal” guy, because that guy can get a bit overbearing, but if this card repeatedly, single-handedly hoses your entire game, you probably should run more removal.

True-Name Nemesis is the most ready comparison for this card, though I’d say that I prefer Lavabrink Venturer overall. Picking a player to have protection from is powerful, though I wouldn’t call it enjoyable. Lavabrink is a bit more of a wild card, getting protection from roughly half of all of your opponents’ cards, instead of protection from all of of one player’s. White is a great Equipment/Voltron color, and this is worth testing in those decks, but be warned that it has protection from half of your cards, as well. I’d wager you’ll see it in games about as often as you do True-Name.

Comparable to Sheltering Light, this will find a place mostly in Feather, the Redeemed decks, though I could see it getting a look in other white-based spellslinging Voltron decks, most notably Shu Yun, the Silent Tempest and Evra, Halcyon Witness. White typically accepts any scraps of card advantage it can get, so losing the scry on Sheltering Light isn’t ideal, but trading that scry for an ability to (possibly) give two creatures indestructible instead of just one is a trade you’ll be happy to make some amount of the time.

Everything I said above when talking about Cubwarden applies here, as well. Outside of the obvious inclusion in Cat tribal decks, this could be a decent addition to go-wide strategies, thought it remains to be seen how effective Mutate is in EDH. If it’s good, I could imagine testing this out. I’m not sold on it, mostly because the buff only happens the turn you Mutate it, and your deck would need a large number of Mutate creatures before we’re comfortable with running this, but sometimes you just want to kill your opponents with a Liger, and this will help you live that dream.

Another card that goes in exactly one deck: Human tribal. If your version of Human tribal plays white (and literally 100% of Human tribal deck on EDHREC do), this deserves testing. Humans don’t go as wide as something like Elves or Zombies, but they certainly go wide enough that an anthem effect is helpful. The second ability won’t often come up, but when it does, it’ll feel very powerful.

Stormwild Capridor is the next in a long line of creatures that want to take damage. Cards like Spitemare, Boros Reckoner, Stuffy Doll, Truefire Captain, Mogg Maniac, and Coalhauler Swine all see varying amounts of play, and typically all go in the same deck. This comes with the downside of not doing direct damage, but the evasion and the damage prevention inherent to Stormwild Capridor helps make up for that fact. Relying on your opponents to do noncombat damage to your creatures is a bit dicey, so having a lot of ways to damage them, yourself, is important. For best results, pair this with the aforementioned cards as well as Pyrohemia, Star of Extinction, Blasphemous Act, Chain Reaction, and various Starstorm variants.

It should also be noted that this does not pair well with Pariah or Pariah’s Shield, unless your opponents are trying to burn you out of the game.

This is comparable to Gaze of Justice, a card you’ve almost certainly never seen or heard of unless you play a lot of Pauper EDH or are a Time Spiral aficionado. They are both sorcery speed, though Gaze requires tapping three white creatures and Swallow Whole only requires tapping one of any color. Unfortunately, Swallow Whole also only targets tapped creatures, though it does grow the creature you tapped as a part of the cost. Overall, I think this doesn’t see play anywhere except in strict budget decks and… decks themed around internet challenges?

This is a great addition to any Cycling deck, whether it be the new Jeskai-colored hotness or the more traditional Zur, the Enchanter Cycling deck. If your deck wants to play Astral Slide, it wants to give Valiant Rescuer a look, as well. Cycling decks tend to be vulnerable to attacks early on, so this is great initial defense, and once you throw in all the stuff you can do with tokens, from Ashnod’s Altar to Skullclamp, and pair it with Gavi, Nest Warden‘s desire to add in extra token synergies like Divine Visitation, this is likely to actually make the cut. Plus, if you don’t like him, you can just cycle him away!

You’ve probably noticed that up to this point many of the cards we’re talking about are directly analogous with other cards from Magic‘s history, and Garrison Cat is no different. Doomed Traveler gives you value when it dies, and, as a result, sees a fair amount of play in decks such as Teysa Karlov, Teysa, Orzhov Scion, and Krav, the Unredeemed. As it’s a Human Soldier that creates a Spirit, it also sees a non-zero amount of play in decks of those tribes. If Garrison Cat is played, it will almost certainly be in all of the same decks, simply exchanging Spirit tribal for Cat tribal. As discussed above, Cats have historically been desperate for playables, and this is likely good enough to make the cut. The art being absolutely adorable doesn’t hurt its chances any, either.

All 50 players packing Healing Salve, rejoice! Your savior is at hand!

I’m a sucker for modal spells, but even given that inherent bias, this card is… okay. It’s not an instant staple by any stretch of the imagination, but if you’re a person with a strict budget or have card availability issues, you could do a lot worse than this, I guess. Enchantments aren’t quite as ubiquitous as artifacts, but you’d be hard pressed to play a game of EDH without seeing an enchantment you wanted to blow up. The other two modes are significantly less powerful, though there could be moments that you’ll be glad to have access to them. I dunno, it’s a common, which don’t tend to make a splash in EDH, but hey, I wanted to talk about more than just the kitty above, and it was either this or Helica Glider, the Nightmare Squirrel.

Hm, maybe I made the wrong choice….

If I’m being honest (and I strive to be), I was left a bit underwhelmed by what Ikoria has to offer white in EDH. The very best cards, Luminous Broodmoth and Drannith Magistrate, will see play in EDH decks for the foreseeable future. They offer players the opportunity to do fun, powerful, interesting things. Outside of those two cards, though, we have a bit of a good news/bad news situation.

The good news is that the rest of the cards have the potential to be powerful. I’m positive that I will be the victim of a Stormwild Capridor careening into my face the turn after a meteor was dropped on the board. Or I’ll be the victim of a Sanctuary Lockdown pumping a gaggle of Humans to exactly lethal at some point in the very near future. These cards are very powerful, but also very niche, which sums up most of white’s offerings in Ikoria. If you have a Humans, Cats, or Cycling deck, you received some new toys that are worth putting to the test. The bad news is that if you are not in one of these niche strategies, there isn’t much here for you.

But perhaps you disagree and you think that I’m wrong about the cards above, or maybe you have found an exciting home for a card that I may have overlooked! Whatever you have to say, I’d love to hear about it in the comments below. Even if I didn’t find anything overly exciting in white, overall from Ikoria, there are a ton of cards I am pumped to throw in decks and you can be sure that our authors here at EDHREC will be discussing and breaking them down for all of you over the following week. Thanks for reading!