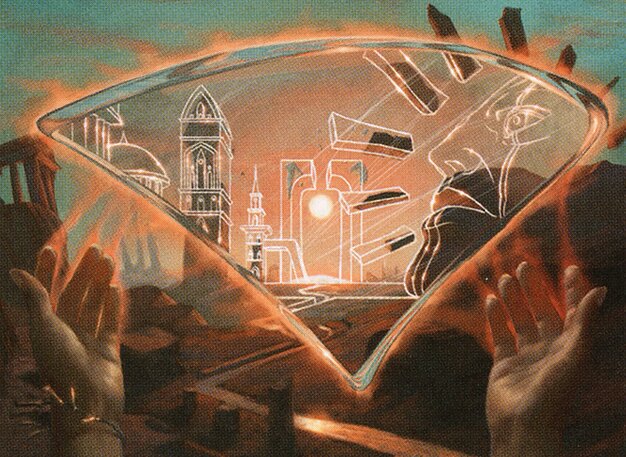 In my last post, I looked at the specific expansions which have contributed the most to the Commander format, in terms of the popularity of cards they introduced. I also found, preliminarily, that recently-printed cards in white are being added to EDHREC-tracked decks at a higher rate than white cards have been added historically.

Mark Rosewater has noted, "White has had more gains in the color pie than green in the last year," and I believe one of the things to which he is referring is the expansion of white's pool of ramp and card draw, the two primary functions most commonly cited as holding white back from being able to hold its own against other colors in EDH.

For card draw, I'm using a fairly broad definition that encapsulates functions and mechanics like pure card draw, cantrips, reanimation, regrowth effects, looting, and rummaging. Basically, a variety of "positive" card advantage functions. You could certainly quibble with some of my choices; if you have a different idea for how to do it, tell me!

For ramp, I'm primarily looking at cards that put you "ahead on mana" relative to what you would be able to spend had you just played one land per turn. I'll also include cards that tutor lands to your hand. They're not ramp, strictly speaking, but they do help ensure you hit your lands drops, and they constitute a specific form of card draw. Plus, such cards seem to be part of WotC's plan to help white.

Creating Supply to Meet the Demand

How is Wizards of the Coast responding to players' demands for better ramp and draw in white? Let's count. First, note that I am again focusing only on mono-colored cards -- a green/white ramp card is just taking advantage of green's strength. These cards aren't improving ramp in white 👇.

For each set of cards making their debut, we can just count the number of cards that serve a ramp and/or card draw function, then divide by the total number of new cards. When you do this, and plot the smoothed trend of the proportion over time, it looks like this: 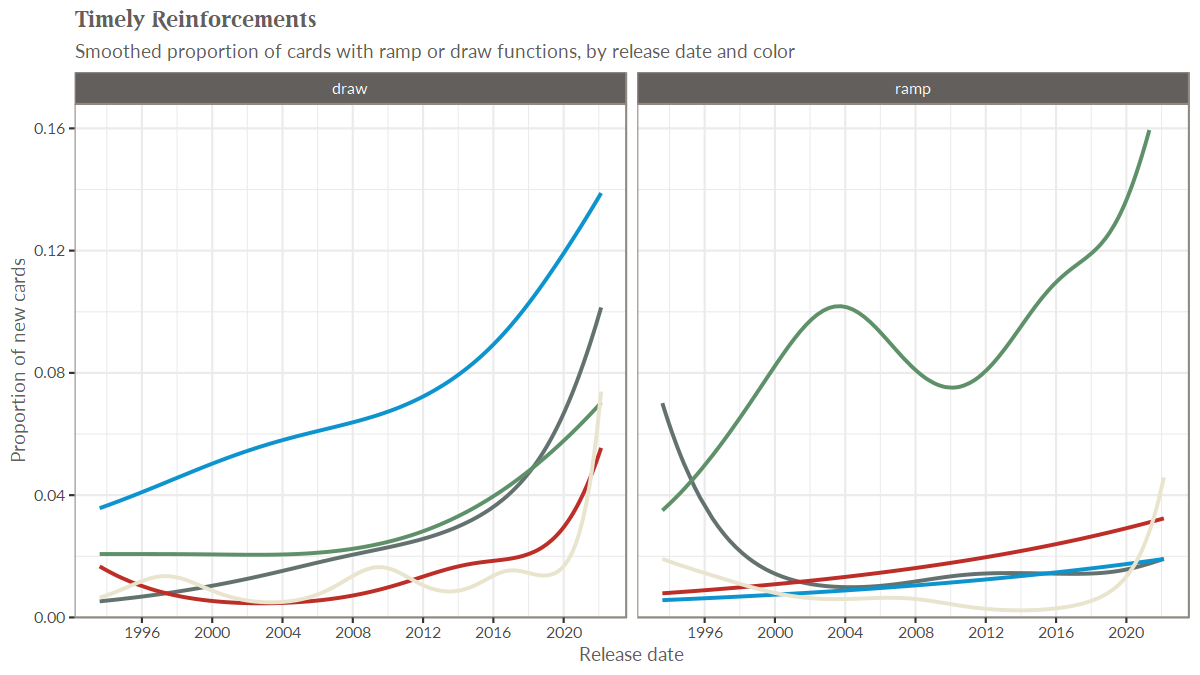 Blue has historically lead the way with card draw, an essential part of its strengths as a color, but all five colors have seen an influx of draw spells in recent years, with white joining the party latest but with the steepest slope. In ramp, a somewhat more niche function, green dominates and has only increased its lead in recent years, but here also white is experiencing a sharp uptick.

We can also think of the question this way: "How recently has this function, in this color, become a priority for WotC?" One way to answer that question is to look at the median debut date of cards printed by color/function:

Each date listed is the date before which half of all cards were first printed in their respective color/function category. So, half of all red cards with draw functionality have been printed since the fall 0f 2018. Indeed, R&D has made "impulsive draw" a priority in red to help with its card advantage shortcomings. Just like in the plot above, you can see that card draw is ramping up across all colors, while ramp peaked relatively early, especially for black.

But Are They Getting Played?

It does no good if Wizards prints many new ramp and card draw spells for white if they are so ineffectual as to not see play. Rather than evaluate on a case-by-case basis how effective each card is in Commander, I want to look at whether internet deckbuilders are actually building with the new tools they have.

Let's start with January 25, 2019, the date that Smothering Tithe was released, and let's consider mono-blue cards first. Of the 659 new Commander-legal blue cards printed since that date, 105 of them have either card draw or ramp functionality; that's about 16%. Taken together, all 659 new cards appear in EDHREC decks 2,293,503 times; the new ramp/draw cards appear in 430,837 decks. So, ramp/draw constitutes almost 19% of the recently released inclusions. Take 19% ÷ 16%, and you'll find a ratio of 1.18, which we'll call the degree to which ramp/draw is overrepresented in Commander decks, relative to all printed cards in blue. That ratio for red, black, and green is 1.32, 1.53, and 1.67, respectively. For white, the ratio is 2.89!

So yes, players have responded to the printing of new tools by eagerly putting them into their decks!

Here is another way of looking at the same question: for any given non-reprint, what is the probability that it will appear in a deck that can play it (by color identity; what I call "color identity prevalence")?

For cards released since Ravnica Allegiance, I built a very basic model1 predicting each card's prevalence within color-aligned decks in the two-year EDHREC data.

First, note that the average mono-colored rare is played in about 1.5% of decks that can accommodate its color identity. I'm mainly interested, though, in what the model says about card draw and ramp in white.

As this plot of modeled propensities shows, the typical white card draw spell released in the last three years has a prevalence of about 3%, or about twice as high as the white baseline. 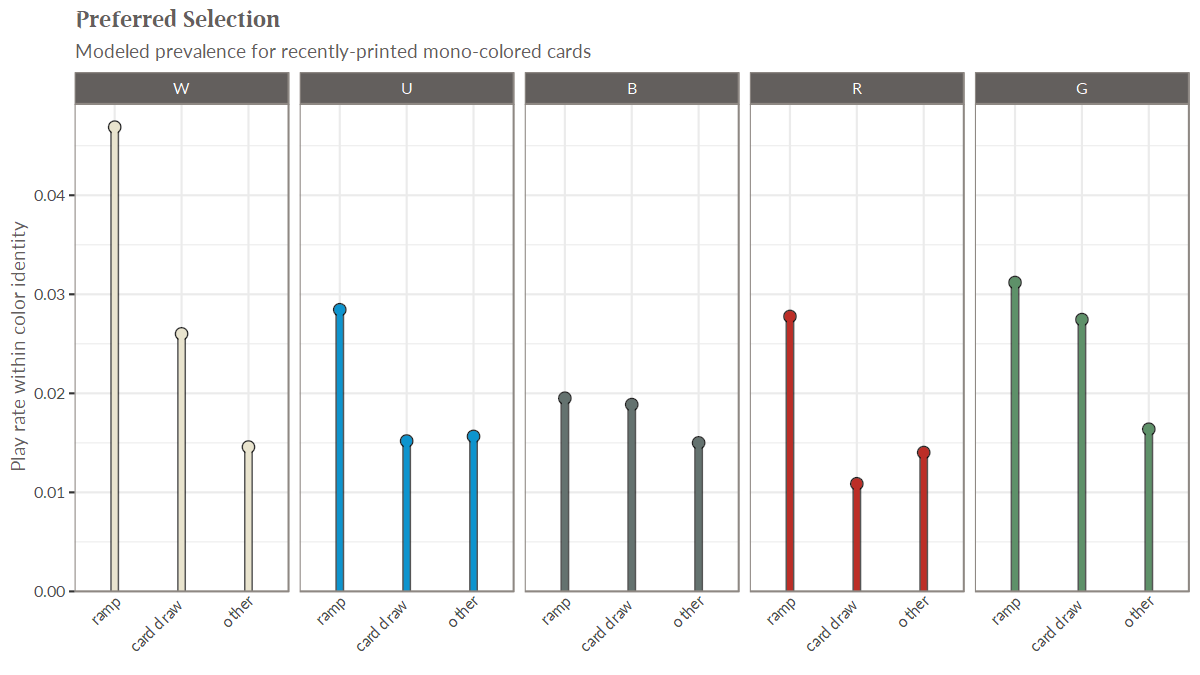 The small set of white ramp cards each see play in almost 7% of relevant decks!2

The sample sizes involved here mean that I wouldn't draw any bold conclusions from these modeled estimates, but I don't think it's too bold to claim that your complaints have been heard, Wizards R&D has responded, and EDH players writ large are making use of the new functionality in white.

Let me hear them @MtG_DS. I’d love to know your ideas for other ways to enumerate WotC's efforts to shore up white's weaknesses and whether this data convinces you that white's needs are indeed being addressed, and if you haven’t already, please follow me on Twitter!

1 Specifically, a negative binomial regression, to account for the overabundance of zeros in the data.

2 Changing the pool of cards to either exclude Smothering Tithe or to stretch back to the beginning of Magic changes the magnitude of the coefficients, but not their order.