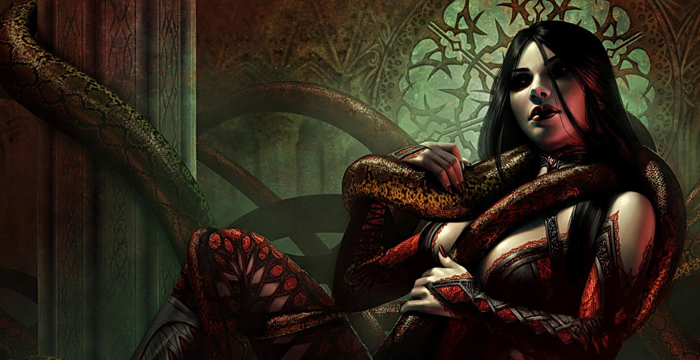 Hello and welcome to another installment of Lore Seeker, an article series devoted to writing about the creatures Wizards of the Coast forgot to write about themselves. I’ll guide you through each fragment that makes up a legendary creature and finally give them the story they’ve been waiting for. In this installment we’re going to be breaking down Xira Arien, a creature that has been waiting quite some time for her time in the limelight.

The story of Xira Arien is somewhat contested, as the name has shown up in two stories that do not play nicely together without making some concessions. Neither version is terribly intricate so I chose the one with the most substance to work off of (and which, in my opinion, feels most like the correct lore).

Xira was a type of sapient insect knows as a Eumidian, a race of humanoid wasps with brilliant gold exoskeletons, four transparent wings, and large green compound eyes. Eumidian culture typically follows that of a hive mind, each individual following the same commands. However, individuals with particularly powerful minds (such as Xira Arien) are able to break free and live independently.

After gaining her independence, Xira became an assassin beholden to Ramses Overdark (a minion of Nicol Bolas). Her claim to fame was the assassination of Lady Caleria. Xira’s particular assassination method of choice was to infect her victims with her own offspring, hitting them with a Tainted Strike. The offspring, if they failed to kill their prey, would mutate those infected into horrifically disfigured Eumidians. Truly a Malicious Affliction. One such assassination attempt against Kei Takahashi ultimately lead to her death at the hands of Tetsuo Umezawa, taking revenge for his now permanently disfigured ally, Kei.

The two notable assassination targets, Lady Caleria and Kei Takahashi, share colors, so I have included a couple cards to either benefit from opponents playing white/green or to specifically hate out those colors as a nod to Xira’s specific assassin toolbox.

No assassin worth their salt would have specific tools as their only trick, so I have added a few more goodies to this assassin’s arsenal: smoke bombs (in the form of Darkness and similar effects) and the ever useful Grappling Hook, which is used to get into all those hard-to-reach areas. I’m sure you’re thinking, “But Xira can fly…” I promise we’ll find a use for that grappling hook in due time.

Some of the confusion surrounding this character can be traced back to the Legends cycle of novels. The author of this trilogy, Clayton Emery, has stated that Xira Arien appeared as Johan‘s apprentice in the Johan novel, but it was something an editor changed last minute without consulting him. Originally, a wizard known as the Glass Mountain was Johan’s apprentice and for some reason was replaced with the name Xira Arien. Adding to the confusion, this version of Xira was a human, not an Eumidian as the card depicts. Black: The color of amorality. Black does what it needs to and doesn’t care who it treads on to get there.

Red: The color of emotion. Red follows it’s heart and most base desires, wanting freedom over all else.

Green: The color of nature. No color knows better the ideals of the survival of the fittest.

The culmination of these colors in Xira show her passionate strive towards the top of the food chain. Backstabbing and espionage are the way to the top in the crowds she finds herself in. She thinks with her gut and uses every advantage she can leverage, including the superior and physical form of a Eumidian. This magnificently dressed Eumidian has chosen to wear primarily red; a clever choice when you deal in blood. No stranger to costume changes, Xira looks fabulous in everything. The amount of flair and regality shows us the type of clientele she consistently works with, or hunts down. It also shows us that she has the means to acquire such elaborate costumes, a sign that business is booming.

Xira is obviously an Insect and a tribal Insect theme is heavily represented on Xira Arien’s EDHREC page. I am far more interested in her career as an assassin, due to her lore, and believe that the Wizard type in the oracle is based off of the first Xira Arien to appear in the novels rather than the Assassin version (appearing in the second cycle of the Legends novels). The Assassin theme lends itself well to a control deck, running a multitude of kill spells, and gives us a more lore specific tribe to include as support/inspiration to pull from.

There are a ton of small Assassin dorks with deathtouch, so we’re going to follow that trend and select creatures with deathtouch wherever possible. Maybe one of those deathtouch creatures would like to use Xira’s Grappling Hook? (I told you I had a plan!) Taking a cue from Virtus the Veiled and his partner Gorm the Great there is going to be a small “must be blocked” package to manipulate combat to our advantage. Xira uses her Deadly Allure to ensnare her victims, letting her red influences push her to be a real black widow killer.

With a generic built-in card advantage ability, it is no wonder Xira’s EDHREC page seems a bit generic as well. Some people seem to be building a “lands matter” deck, while other go with Insect tribal. It feels like people don’t really know what to do with her because she kind of fits any Jund strategy just fine.

For a control deck, though, this ability is perfect. It enables us to hold up a removal spell and at the same time not waste mana if there is not a threat we need to take care of that round. More cards is always better for a control deck. In very rare cases, I can even see the ability to let someone else draw a card coming in handy when trying to make a political ally. Her ability to fly will also come up a surprising amount, but commander damage is quite unlikely to matter.

Thinking of all the dirty deeds Xira has to commit, it is no surprise that she constantly requires a costume change. A wardrobe change is hard to find on a Magic card (Quickchange, perhaps, but it’s not in our colors) but masks are thankfully not that difficult to come by in Magic art, and since Xira frequents the Royal Masquerade, this kills two birds with one stone. (I tried to squeeze Conjurer’s Closet in here as well, but the synergies were just not there.)

On top of everything, Xira is able to wear a cloak (an important piece of fashion that enables a grand reveal of her next costume). The fact that she is in such public view gives a glimpse to the deceitful nature of Xira Arien, a magnificent and multifaceted masked murderer.

This deck plays similarly to a Virtus the Veiled and Gorm the Great deck. It is control heavy and is going to destroy a lot of creatures, ours included. The heavy control shell will buy time for us to either sneak a win in with Infect, flood the board with Rise of the Dark Realms, or even have a chance of assassinating our opponents with Vraska the Unseen.

My previous three articles ended up as aggro decks, so I am glad Xira allowed me to fall back into my true comfort zone of control. When I decide to take on a character, I don’t know the type of deck their tale will influence, but I like that this list gives Xira’s EDHREC page a bit more cohesion. I hope this deck has sparked your interest in this wicked winged woman, and as always, let me know which legendary characters you’d like to see get the story spotlight in the future!