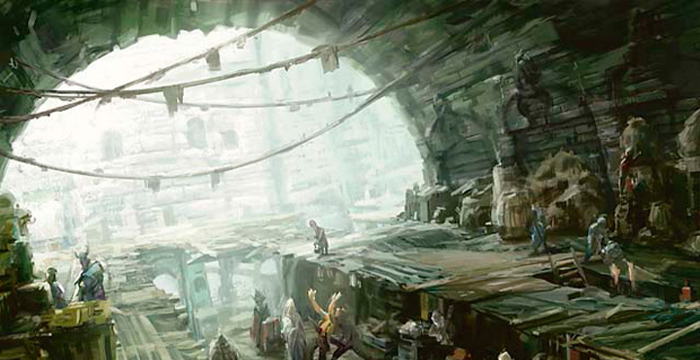 Hello, and welcome to another installment of Lore Seeker, an article series devoted to the legendary creatures to whom Wizards of the Coast forgot to give a story. I’ll guide you through each fragment that makes up a legendary creature and give them a little extra background love. This time around we’ll be highlighting Tymaret, the Murder King.

Tymaret, known by the humans of Theros as The Murder King, is an undead warrior and the leader of Odunos, the polis inhabited by the most violent Returned. Tymaret commands the best warriors among them in organized raids against the living. These raids are small, but effective, almost always happening at night.

This is the only information on Tymaret himself, but we can dig in a bit more to what it means to be a Returned of Theros.

When a denizen of Theros dies, a clay mask is placed over their face prior to being laid to rest. To escape the Underworld, ruled by Erebos, God of the Dead, one gives up their identity, memories, anything that ties them to their past lives. As a part of this process, their faces lose all features beyond a few holes that serve as the only reminders of what has been lost. They then doff these clay masks and replace them with a mask of gold to serve as a flimsy, hollow identity. These are The Returned, the Zombies of Theros, and they endlessly wander the plane, aimless and slightly horrifying, a grim reminder of the certainty of mortality.

Since Tymaret is the King of Zombie Warriors, there is a small package of Zombie tribal synergies; the bulk of these cards are the Zombie lords, although, when possible, I've tried to include the ones that are packaged with additional abilities. The remainder of the Zombies are resilient specimens such as Relentless Dead and Gravecrawler.

The title of Murder King is one bestowed upon him by the denizens of Theros, and the title is well-earned. He is a villain through and through, the terror from Odunos. Tymaret has no qualms about killing anyone and everyone, and he will sacrifice his own soldiers to accomplish his goals.

With this in mind, we have a strong inclination to create a self-sacrifice style of control deck. Destroying creatures is going to be easy, given that black and red have some of the more efficient creature removal in the game, but dealing with enchantments is going to be tricky; play the table and take out problem creatures for others, then persuade them to use their resources to deal with problem enchantments, when you can.

Black: power at any cost; amorality and the desire to dominate.

Red: freedom of action for all.

Black and red together often create the most dastardly of figures in the game. A lack of morals layered with a strong passion to do whatever you desire tends to create megalomaniacal individuals. Tymaret embodies the purest form of senseless violence and destruction, firmly establishing him as the table's antagonist. The art for Tymaret was the main source of inspiration for my decisions while deckbuilding. I'm getting a very Mad Max: Fury Road feel; from the colors to the masks to the severed head, this art feels as though it is taking place in a post-apocalyptic windswept desert. It's dirty, gritty, and over-the-top cheesy, yet somehow maintains a certain level of bad-ass. To embody the idea of Fury Road, the main theme of this deck is Vehicles and Vehicle synergies. We're including resilient pilots and ways to return artifacts from the graveyard, as well as pilots that grant an advantage from being tapped or untapped.

Given what we know about Tymaret, his creature type comes as no surprise: he's a Zombie and a Warrior. We've already addressed his undead nature, so let's take a look at addressing him as a Warrior. His story makes mention of raids, and, as it turns out, there's an ability named Raid that triggers if you attacked with a creature this turn. The mechanic was confined to the Tarkir block, but Wizards has printed plenty of cards before and since that care about having attacked with a creature. That being said, there's not an abundance of great options, but these cards do make a small appearance.

Tymaret is the type of villain that keeps coming back, given that you can't kill what is already dead. His first ability would be a lot more intriguing if we could target creatures with it, so it'll be used as an expensive sacrifice outlet. His second ability is going to be the primary focus. Tymaret is a resilient creature that, while he is expensive, he'll be leaving and Returning to the board frequently. We're also including an assortment of discard outlets so that we can put Tymaret directly into the graveyard without having to cast him.

Our creatures are going to die, leading us towards an aristocrats style of deck. Sacrifice outlets, creatures with good death triggers, and payoffs for having creatures enter and leave the battlefield are going to be pivotal. An overlooked abilities that'll fit in nicely is the Dragons mode of Outpost Siege; it deals one damage to any target whenever a creature you control leaves the battlefield. This is a neat ability that often gets forgotten about due to the other mode's card advantage. Either half will work nicely with this deck, though.

We need a place to fix up our Vehicles in Odunos; a station, or perhaps a series of stations. Blasting Station, Grinding Station, Salvaging Station, and Summoning Station come together to form an infinite combination that will deal one damage to any target repeatedly. The likelihood of actually assembling the combo is slim to none in this deck, but the individual pieces can be quite useful on their own.

As we explored earlier, the Returned must completely relinquish their identity to leave the Underworld and return to the surface. That being said, they often can be found repeating familiar actions from their lives prior to their passing. In other words, Tymaret was probably the Murder King long before he was ever actually given the title.

A Tymaret deck can be assembled for very little money. Building around Vehicles, and a mana base that only includes two colors, helps keep the cost low. Damnation is the most expensive card in the deck and can easily be replaced with a multitude of cheaper board wipes. Urborg, Tomb of Yawgmoth is slightly unnecessary as well, even though the deck skews towards black.

I am excited to return to Theros and delve into the plane once again. It's all beautiful and it still has a lot of mystery to uncover. With the added intrigue of exploring Theros' Underworld, I wanted to focus on a character that I hope to see more of: in the new mythic edition art for Elspeth, Knight Errant we see her with a mask of The Returned. How does a planeswalker escape the Underworld? Did she have to give up her memories or does her innate power prevent the loss? I am very curious to find out! What do you think will happen in Theros: Beyond Death? That’s it for this week! As always, let me know which legendary characters you’d like to see get the story spotlight in the future.