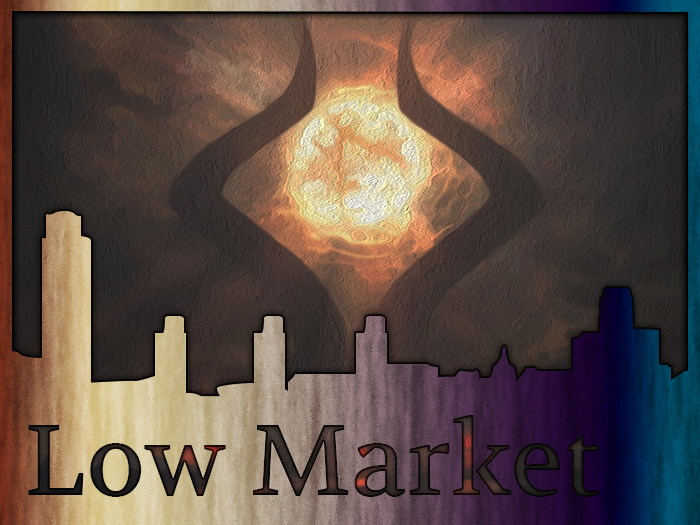 Darn You to Heck

When the two suns of Amonkhet were naught but distant lights on the horizon, we knew to expect two things: top-down Egyptian themes, and top-down Nicol Bolas themes. What I did not expect was a smattering of curses, which (save for Wheel of Sun and Moon and Paradox Haze) are the only cards in Magic that enchant a player. These new curses, including the remarkably powerful Overwhelming Splendor, sent me down the rabbit's hole of janky deckbuilding. Is it possible to build a functional curses EDH deck? Spoiler alert: yes.

But what commander to choose? At time of writing, red and black are the colors with the most curses, and green is the least at a whopping one. In addition to Curse of Misfortunes, a curse that sticks a new curse on an opponent every turn, playing black gets us the one non-curse curses-matters card (isn't that a mouthful) in Bitterheart Witch, which also searches for a curse and slaps it straight onto the battlefield. Between these two cards and Overwhelming Splendor, I determined that I wanted my curse deck in at least white-black (to say nothing of all the enchantment-matters cards in white).

Armed with this knowledge, I set out to find a commander to head our curses deck. I almost immediately came upon Zur The Enchanter: he's in an ideal color combination, and can tutor a number of curses in addition to relevant toolbox-y enchantments (like an Oblivion Ring when we are in need of removal). Glancing in another direction, I found that Queen Marchesa is an option for dipping into red and heading up a pillowfort strategy. I debated back and forth which to build, and with all of your input on my last article,I determined to put both Zurses (?) and Marcurses (???) under the Low Market microscope.

The Curse of Choice

Let's begin with what both decks have in common. I suggest that Curse of Misfortunes (or Bitterheart Witch into Curse of Misfortunes) be our primary strategy (seeing as few other cards interact with curses in a meaningful way.) Both color combinations have Overwhelming Splendor to lock down a problematic opponent, Curse of Exhaustion to plug up our spell-happy friends, Curse of Death's Hold to wipe out small creatures, and any number of options for long-term damage and destruction (Cruel Reality, Curse of Thirst, Torment of Scarabs, and Trespasser's Curse).

What does Marchesa bring us with red? The most powerful red curse, I think, is Curse of Bloodletting, which doubles damage to the enchanted opponent. Conveniently, Curse of Thirst is a damage-dealing enchantment thats scales off of the number of curses attached to that player. Suddenly, our lockdown-curses contribute to our win condition, and Curse of Misfortunes will gradually tick up our damage.

The most notable blue curse that smacks of "possible win-con" is the new Fraying Sanity, so long as we commit to trying to "mill" or "deck" our opponents (leaving them with no cards in their library). Since Zur can fetch three-mana enchantments, I feel comfortable making this a central piece of our deck. Combined with Zur staple Copy Enchantment to majorly mill multiple opponents, or else multiplicatively mill a single opponent (incidentally, "Multiplicatively Milling" is definitely the name of my next cover band). Better still, Curse of the Bloody Tome is a mill-related curse that can get Fraying Sanity started. As much as I love curses, I think we need an additional strategy to get our decks off the ground. Let's begin with Queen Marchesa, who I think plays very well into a token strategy. Bridging "enchantments" and "tokens" is remarkably easy: enchantments like Assemble the Legion are "armies in a can" with how many tokens they can produce unless dealt with swiftly. To play with our other enchantments-matter effects (e.g. Doomwake Giant), we have the cycle of creatures who produce enchantment creature tokens when they untap: God-Favored General, Forlorn Pseudamma, and Satyr Nyx-Smith.

For those able to stretch their budget slightly further, Anointed Procession is a perfect card for this strategy, it being an enchantment that helps us create more tokens still. I suspect its current $5.00 price tag owes largely to Standard play, seeing as the similar-but-monogreen Parallel Lives is only a few dollars more despite being significantly older.

Run of the Mill Jumping back to Zur, we can use Fraying Sanity and friends as our primary win-condition, but we'll need some contingency plans if central cards get exiled. Jace's Erasure and Sphinx's Tutelage fit in both of our niches, those niches being "enchantments that mill" and "enchantments fetchable by Zur."

Mill is not a traditionally "good" win-condition in Commander, on account of its grinding pace and the number of decks that actively want cards in their graveyard. To mitigate the latter, we're packing Zur with significantly more graveyard hate than Marchesa. Both decks have a copy of Bojuka Bog, the most-used land in mono-black behind basic Swamps. The new Scavenger Grounds offers more land-based graveyard exile, and can be used repeatedly thanks to our handful of cycling Deserts (Desert of the Mindful et al). Were there a bit more room in our budget, I would also snag Rest in Peace, but in its absence, Planar Void will serve as decent enchantment-based graveyard hate, so long as we fetch it prior to our copious milling.

A note on pricing in our Zur deck: a few prominent cards in the deck like Fraying Sanity, Copy Enchantment, Paradox Haze, and Strionic Resonator cost a few more dollars than the average card in either of these decks. For Zur, I'm willing to make an exception and loosen the belt a bit, since: a.) three of these cards can be tutored by our commander, and b.) they are all unique, hard-to-substitute effects that synergize with our strategy.

This is one of those situations where a "Sideways Strat" may actually be the most straightforward strat. The existence of everyone's favorite crazy wizard, Laboratory Maniac, lets us turn a self-mill strategy into a win-condition, though I will admit that actively cursing ourselves with Fraying Sanity and Curse of the Bloody Tome feels like something of a flavor-fail. If we go down this route, we need ways of reanimating Laboratory Maniac when we (almost inevitably) mill him: Unburial Rites and Dread Return are options for reanimator spells that can function from the graveyard. Continuing a theme of this Zur list, Animate Dead is an option that our commander can easily retrieve for reanimation purposes.

With any luck (or, more accurately, a lack thereof), our opponents are now knee-deep in curses, at the low low price of $50.00 for Marchesa and $70.00 for Zur by TCG Mid prices. According to EDHREC's new Themes pages, there are only 80 curse decks at time of writing. Armed with our new curse-shaped knowledge, I hope we can contribute a few more!

Next time, Low Market is turning its gaze back to combo decks. I'm presently caught between Borborygmos Enraged (land-based combo!) and Experiment Kraj (activated ability-based combo!). Want to throw support behind your favored large Ravnican creature? Want to tell me which curse deck tickles your fancy more? Let me know in the comments! As always, you can drop me a line on Twitter or via email. And, if you'd like to hear my voice in addition to reading my text, check out the Talking Atlas podcast, where we are celebrating our 100th episode! Until next we meet, enjoy browsing the Low Market.