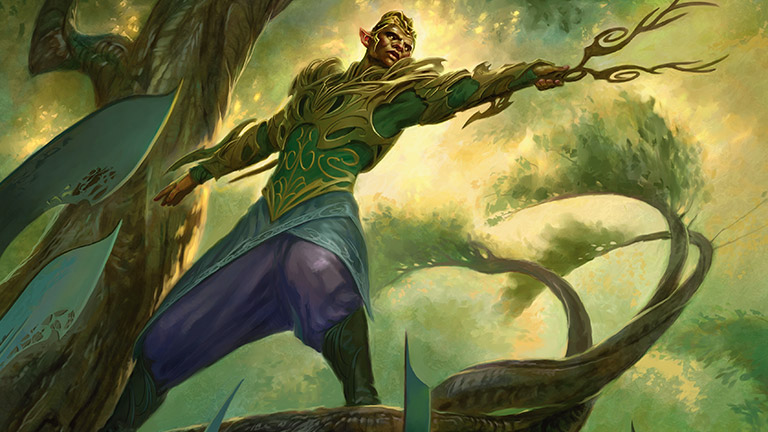 Now that Aether Revolt is in the wild, we here at Low Market are doing our level best to stick it to the Man. We've located a druid sympathetic to the renegade cause, and he could really use a budget deck, so let's give him a hand!

In its base form, Magic is a game about resources – cards in hand, life, amount of available mana, et cetera – and some of the most elegant Commanders create a go-between for these resources. What does our game plan look like when Rishkar links counters to mana generation? To begin with, all we need is Rishkar and one other creature to accelerate from three mana to five since Rishkar can target himself with his own enter-the-battlefield trigger. Counter to several green counter strategies, this deck encourages us to go wide with a multitude of creatures with a few counters on them, rather than a few creatures with lots of counters on them. However, as long as our early game involves using counters to ramp, we can take advantage of them to end games later on.

EDHREC's Rishkar page, provides an impression of the commander "categories" our deck wants. Naturally, we have an abundance of counter-granting effects, or creatures who bring their own counters. There are bits and pieces of powerful green removal, which is rarely on-theme but no less necessary. Card advantage is another key category, and with how many creatures we play, our draw engines will likely rely on creatures.

Before we start list-crafting, keep in mind that Rishkar's ability works with any type of counter, not just +1/+1 counters. That said, we focus primarily on +1/+1 counters for maximum green synergy. Now that EDHREC has given us an idea of our categories, let's shake our renegade tails and fill them out! Rishkar brings a couple of +1/+1 counters to the party, but to take maximum advantage of his mana ramping ability, we need a few ways to generate more. Curse of Predation is one of the fastest methods of getting counters on most of the team. Both Death's Presence and Gladehart Cavalry provide +1/+1 counters in a way that makes losing our creatures a bit less upsetting. Since we're playing a green creature-heavy deck, I expect boardwipes to be a pretty big Achilles Heel, and anything to make them sting less is positive in my book. Having one indestructible creature like Predator Ooze ensures a post-boardwipe target for orphaned counters.

Cytoplast Root-Kin, and indeed, most creatures with Graft, are a clean mana-less method of spreading counters around. Forgotten Ancient gives us the option of going both tall and wide with our counters, and gets surprisingly big in a multiplayer Commander game. It turns out that casting spells is an important part of playing Magic.

I expect Strength of the Tajuru to be used flexibly as both ramp and a win condition. It allows both end-of-turn surprise ramp and middle-of-combat surprise damage to the face.

I've already described this deck's desire for a few early creatures that Rishkar can grant ramp-superpowers to, which is why I have a handful of one-drops with +1/+1 counter mechanics: Experiment One, Scute Mob, Servant of the Scale, and Spike Drone.

When playing decks with ramp as a theme, I frequently find myself with zero cards in hand, and in this scenario, one of those dreaded boardwipes could spell the end for us. To fight the boardwipe boogeyman, we're going to stuff this deck with all manner of card draw.

Quick on the Draw

With little exception, green's card draw is contingent upon it having creatures, whether that be "many creatures" or "a big creature". In some cases, that draw effect even involves +1/+1 counters! Armorcraft Judge and Inspiring Call each scale off of the number of creatures we control with +1/+1 counters, and the latter doubles as yet-more boardwipe insurance. Shamanic Revelation and Regal Force are going to cost us a bit more mana than the previous two, but draw at least as many cards.

For thematic purposes, I can't not include Rishkar's Expertise. Its effectiveness definitely varies, but with at least our commander out, it will draw three cards along with casting a free five-mana-or-less spell. Harmonize, on the other hand, is very consistent and probably a good play to follow Rishkar (or maybe even cast off of his Expertise!) While plenty of colors have generically good removal, it's often cheaper to find alternatives, to say nothing of the fact that getting on-theme removal creates more synergy within our deck. I was pleasantly surprised to find a solid collection of +1/+1 counter-related in my card research, such as Nissa's Judgment, a.k.a. "Everyone with a counter go dogpile on that guy!" While I prefer green's new one-sided fight effects to most of its usual fight effects, Mutant's Prey is an abnormally strong fight spell, since having a creature with a +1/+1 counter on it should be relatively trivial.

With a little bit of setup mana, Ainok Survivalist can remove an artifact or enchantment while simultaneously becoming a mana dork. For wider-scale destruction, Bane of Progress can wipe out all artifacts and enchantments, and our final list will only have a few of our own that might get destroyed. Beast Within is the most generic piece of removal in our deck, but there's a reason it's a monogreen staple . If you find that your creatures aren't enough to fend off all of your opponents' creatures, consider adding Ezuri's Predation or The Great Aurora, as they rank among green's handful of spells that get rid of multiple creatures.

If you want some graveyard hate to fight off recursion decks (such as our Sedris Deck from last week), you can include the ever-useful Scavenging Ooze. I think it's adorable that our deck lets "ScOoze" tap for mana to activate its own ability. On the topic of recursion, we could really use some in this deck, since the death of our creatures is almost inevitable. When I discuss recursion in Commander, I usually mean cards like Regrowth and Archaeomancer, effects that don't care when a particular card was put into our graveyard. That said, one of our most useful Rishkar recursion cards is only effective right when our creatures die: Cauldron of Souls. In most decks, our creatures returning to the battlefield with -1/-1 counters is strict downside. But! This is when I remind you that Rishkar makes creatures tap for mana so long as they have any type of counter on them. Plus, many of our creatures enter the battlefield with +1/+1 counters on them, which will cancel out with the -1/-1 counter and leave us a perfectly good (reusable) creature.

Mass recursion spells can be another place we dump our gobs of mana: possibilities include Wildest Dreams, Creeping Renaissance, and Praetor's Counsel.

Similar to Sedris, I suspect our win conditions will frequently be big creatures to smash into our opponents, except many of them will be big creatures... with counters!

Hydras in Magic have a great habit of being highly-scalable creatures. Cards like Managorger Hydra, Hooded Hydra, and Heroes' Bane can act as mana dorks early in the game, and great green smashy things late in the game. Avenger of Zendikar and the relatively new Primeval Protector both bring a lot of power to the table while also enabling a whole mass of creatures to generate mana. In a different vein, an unchecked Mycoloth is liable to kill people all by its lonesome.

Given that most of these win conditions require "fair" play – that is, playing and attacking with creatures in a way that allows opponent interaction– you rarely get the chance to surprise-kill anyone out of the blue. That is part of the motivation for including Solidarity of Heroes, which is one heck of a combat trick.

This week on the Sideways Strat: everyone's favorite slow-building fungi, the Thallids! This is another time I remind us that Rishkar's ability only says "counters", not "+1/+1 counters". Since cards like Thallid (and all its buddies) get spore counters each upkeep, they convert themselves to mana dorks with zero additional investment! Thelon of Havenwood is the archetypal Thallid / Fungus / Saproling Commander, but I think Rishkar provides an exciting way of taking the deck in a new direction.

Through a small consultation with the Mystics of Finance (a.k.a. TCGPlayer's "Mid" prices), this Rishkar deck rings up for $60.00. Since Rishkar himself is a recent release, he will likely trend downwards in price as Aether Revolt circulates. Thank you all for joining us this week on Low Market. Do you have any Commander or theme suggestions? Want to interrogate me about my favorite Thallid? (Hint: it's Utopia Mycon.) Track me down on Twitter or Tumblr, or drop me an email. Tune in next time for a look at affordable energy (and I don't mean wind farms). Until then, enjoy your time browsing the Low Market.