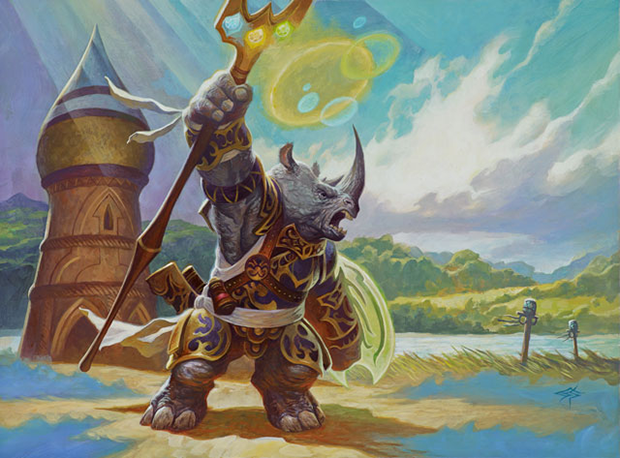 The Realm of Possibilities

In Low Market's long, storied, two-prior-articles history, we began with a commander, and then worked our way around to a theme. Today, we're going to walk on the wild side and approach deck building from a different direction: choose a theme and find the commander that suits it best. Now, if you're in the habit of reading titles (and I hope you are) then you already know that I already arrived at a conclusion (Roon), but how did we get there? What the Bant is our theme?

It's energy, that hot new Kaladeshi commodity! Kaladesh block was notably absent an energy Commander, hence our current predicament. To narrow down our options, we look first at the crux of the energy deck: its energy producing engines. When I say "engine", I generally mean a card capable of producing energy repeatably or at least in large bursts. White has Aetherstorm Roc; blue has Aethersquall Ancient, Aethertide Whale, and Era of Innovation; black has Demon of Dark Schemes and (sort of) Gonti's Machinations; green has Aetherwind Basker and Architect of the Untamed; and there's Aetherworks Marvel, Dynavolt Tower, and Gonti's Aether Heart in colorless. Discounting the inefficient and strange-to-work with Gonti's Machinations, that means at least blue and green give us access to the most numerous and simplest to run energy engines. This works out especially well considering that Empyreal Voyager and Rogue Refiner are solid energy cards in both blue and green.

For maximum flexibility, I do think we should add a third color. Currently, we're looking at only seven or eight engines, and pushing into white or black gets us at least one additional. Demon of Dark Schemes has the upside of synergizing with Aetherworks Marvel, but my mind is tracing a different path: Aetherstorm Roc cares about creatures entering, Aetherwind Basker cares about creatures too, and Era of Innovation / Gonti's Aether Heart care about artifacts entering. If we build a deck around artifact creature tokens, helped by the fabricate mechanic on cards such as Cultivator of Blades, then I think we'll be in good shape to utilize as many of our engines as possible.

Okay, so we have a color combination (white, blue, green, a.k.a. Bant), but what about commanders? A quick survey of Bant generals, and it looks like Roon of the Hidden Realm is our best bet. Most of the one-off energy producing cards, like the above-mentioned Rogue Refiner, trigger their effect on entering the battlefield, so having a commander like Roon makes them repeatable engines. I'll also add a number of these "one-off" or smaller energy effects to our deck list. (Also, for those inclined more towards Sultai, I'm sure an energy deck could easily be built there as well.)

Blink and You'll Miss It Even though our Commander can flicker our various energy ETB creatures, I always like to include a little redundancy in the deck, both for those situations where our Commander is inaccessible and to keep our opponents on their toes! I'm adding Eerie Interlude, Displace, Ghostly Flicker, Cloudshift, and the new Illusionist's Stratagem. In addition to "flickering" our creatures, these cards provide a few more instants and sorceries to trigger Dynavolt Tower, which I suspect will be our least-supported energy engine in this creature-centric deck. I can't built a flicker deck without including Brago, King Eternal: he'll flood our reserves with energy, and unlike Roon, he can even flicker our non-creature permanents like Glassblower's Puzzleknot and Consulate Surveillance.

It isn't technically a flicker card, but instant-EDH staple Panharmonicon is an absolute must for this deck. EDHREC agrees: despite being released only a few months ago, Panharmonicon is already in some 81% of Roon decks.

With any luck, that's enough energy to keep the lights on for a few days. Back in the energy engines section, I referenced how producing artifact creature tokens makes a good argument for working with a few engines, and that's where we head next!

Luckily, thanks to Kaladesh's fabricate mechanic (see: Cultivator of Blades), we have an easily-accessible way to spew out artifact creature tokens that synergizes with our flickering commander. Whirler Rogue makes thopter tokens (near and dear to my heart) rather than servo tokens, and can provide evasion to connect with our more threatening energy-based creatures like Electrostatic Pummeler. Myr Battlesphere is more than just a funny name: it's one of the most explosive artifact creature token effects, with a flicker-able body to boot. We might build up a Myr army large enough to one-shot someone!

Well, that was easy! We're coming into the home stretch here. You might ask, "But Bryce, what about our win condition section? You did one for Sedris and Rishkar! "To which I would respond, "Correct, dear reader!" But thanks to our energy theme, we already gathered a great many win conditions! Smack them with a giant Aetherwind Basker, for example! Bury them in Aetherworks Marvel card advantage! Or perhaps overrun them with Cultivator of Blades and a fighting force of energy creatures!" Moving on from that hypothetical exchange, we have a few areas to mop up.

Clean Up on Aisle "E"

Our Roon deck has a few win conditions scattered throughout its energy cards, but we've ended up a little light on removal, ramp, and card draw. For this, let's look back to some of Roon's staples! Mulldrifter is great for card draw, Farhaven Elf is great for ramp, and Coiling Oracle sits comfortably in between the two. Reclamation Sage is one of my favorite pieces of removal, and if we include a copy, I think we'll have enough options to justify the inclusion of Woodland Bellower, another build-around-me card that I love so much.

This week's Sideways Strat is less about deck building and more about play style. With all of these energy-producing engines floating around, we've created a deck with a handful of small combos. For example, Aetherstorm Roc + Aethergeode Miner + Panharmonicon = infinite Miner flickers. Combine this with Soul of the Harvest, and we just drew our deck. In a non-infinite vein, we have Aetherwind Basker + Peema Aether-Seer to buff the Basker and regain all of our energy. If we then pump the Basker again and flicker the Aether-Seer, we've gained obscene amounts of energy. As you pilot this deck, keep a close eye on what energy producing methods you have at your disposal, and where you can push them towards infinite or finite combos.

Thanks to our commitment to alternative energy, this Roon Energy list runs us a clean $45.00 according to TCG Mid prices. A special thank-you for the EDHREC articles team for suggesting and brainstorming this week's concept. Do you have a killer Sultai Energy deck you want to share? Want to suggest a theme or Commander for an upcoming article? Tweet at me here, Tumble at me here, or email me here. Until next we meet, enjoy your time browsing the Low Market.