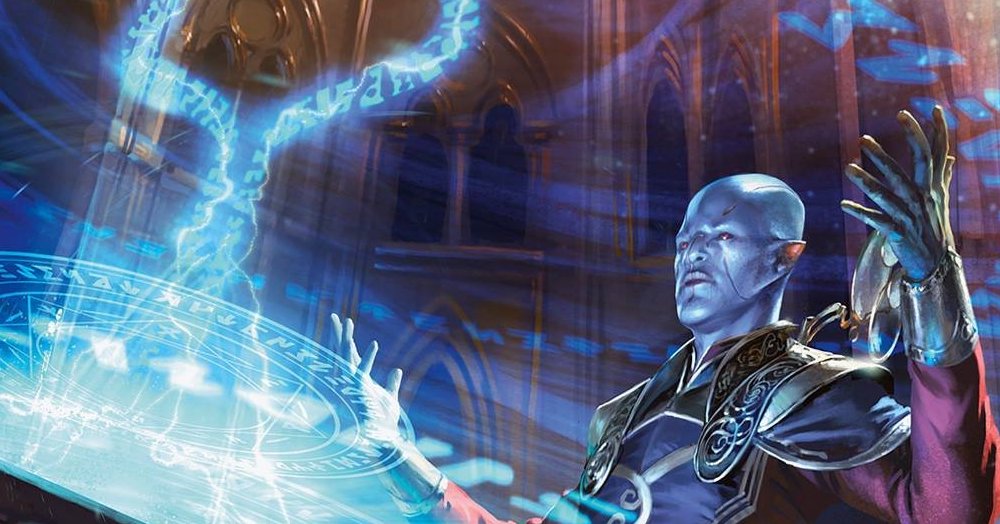 With Ravnica Allegiance out and about, I knew this week’s article had to focus on one of the new guild mechanics. The only question was, which one?

My first thought was Rakdos’s Spectacle, as seen on cards like Skewer the Critics. It’s cool, but after browsing the full spoiler, I decided it was better suited to Limited than EDH. Gruul's Riot is powerful, showing up on cards like Gruul Spellbreaker, but it's not the sort of mechanic one can build around. The same goes for Simic’s Adapt (seen on Sharktocrab and friends). Afterlife was in consideration for a while, especially because we're nearing tax season in the U.S., but even with the consistency of death and taxes, it didn't feel like Ministrant of Obligation and friends provided enough of a build-around incentive.

I'll be honest—I wasn't that high on this mechanic at first. In fact, it's not even a mechanic, technically speaking - it's an ability word. Anyway, I wasn't enthused.

Then I built the deck, and I must admit, it's super fun. I'm thrilled to share it with you today! Let's get our litigation on.

Before we commence, let’s analyze our build-around mechanic. Addendum appears mostly on instants. It’s basically flavorful reminder text that tells us, "Hey, this is a modal spell. You can cast it at instant speed if need be. However, if you want a power boost, cast it during your main phase."

Pretty simple. Here’s an example of perhaps the most powerful Addendum spell in the whole set:

Cast it at the end of your opponent’s turn so you get full use of your seven new cards before anyone else. Alternatively, cast it during your turn to put a huge permanent into play for free. I recommend Torrential Gearhulk.

So that’s our mechanic. Now, for our commander.

My mind immediately went to this guy:

Uncounterable instants and sorceries are great for us. (Uncounterable Dragons are less great for us, but hey, why not?) Since we’re playing a deck built around instants, it seems Taigam, Ojutai Master’s second line of text should prove irreplaceable. Getting not one, but two Addendum triggers on our spells? That seems outstanding! But wait a second…

We could use Taigam, but we would only get our Addendum bonuses on the first cast, not the second. Not the end of the world, but I knew we could do better.

Next, I went to the Ravnica Allegiance spoiler. Maybe we could find help from our guild's new commander.


I considered Lavinia, Azorius Renegade for exactly three seconds. Then I realized two things: first, this card has nothing to do with Addendum, and second, my friends would hate me. Thank you, next.

Ah. Then I remembered something. Isn’t there another Azorius commander who pays you off for casting instants? I scrolled through EDHREC’s Azorius page and, sure enough…

Found it! Noyan Dar, Roil Shaper will be our commander for this deck. It rewards us for casting our Addendum spells, and it has a sweet merman beard. What more could we ask for in a commander?

Beginning the Build Around

A simple search of your favorite card database should pull up a list of Addendum spells. It’s unfortunately pretty short. Here’s the complete rundown:

Some of these cards (Arrester's Zeal, for example) are designed more for Limited than EDH. Still, I think we can still find use for them, especially if we properly build around them. Plus, cards like Precognitive Perception and Sphinx's Insight seem powerful when cast during our main phase—even more so when Noyan gives us free 3/3s to go with them.

But there’s one more core Addendum spell I haven’t mentioned yet. You've probably drafted it on Arena:

Sorry Noyan, but if this card could be our commander, it would be. Dovin's Acuity is the perfect payoff for all our Addendum spells. Note that it works for any instant cast during our main phase, not just those with our mechanic on them. An outstanding addition.

So we have all our Addendum cards. However, we’re not just going to pack 89 lands into our deck and call it good. We need more!

When a new set drops, I like to browse the spoilers to see what fits well with our mechanic. Here are a few that caught my eye:

Since we’re operating mostly at sorcery speed, I like Tithe Taker’s ability to defend against counterspells and activated abilities. Sphinx of New Prahv is a nice big threat we can feel safe tapping out for. Opponents likely won’t want to spend the extra two mana to kill it, even though they probably should.

Though people are freaking out about this card for some format called Legacy, I think Pteramander is worth a shot in Commander, too. The front half is obviously somewhat weak, but we’re playing enough instants and sorceries to make its Adapt cost affordable. And aside from casting Sol Ring, what else were we going to do with our first turn?

To continue building around our commander (and our wannabe commander, Dovin's Acuity), let’s find instants we wouldn’t mind casting during our main phase. EDHREC’s spellslinger theme is perfect for the job.

As for potential win conditions, Noyan Dar’s land creatures will help us build an army massive enough to take over the game. It never hurts to have a few other win conditions, though. I think Metallurgic Summonings, Docent of Perfection, and Expropriate fit the bill.

To fully maximize the potential of Noyan and Dovin’s Acuity, we want instants that we wouldn’t mind firing off during our main phase. Here’s one:

Dig Through Time provides an excellent way to find even more Addendum cards. Plus, Delve synergizes nicely with decks playing many spells like ours. Very nice!

Finally, did you know Addendum existed in Magic even before it was called Addendum? Fans of Cube will recognize these:

Time Spiral was full of fun spells that cared about the specific time they were cast. Let's add 'em!

Defense Against the Opponents' Instants

Since Addendum encourages us to play at sorcery speed, I think we should encourage our opponents to do the same. In the vein of Tithe Taker, these seem good for us:

Rounding It All Out

Finally, we should include a few more rewards for casting instants.

Rise from the Tides can give us even more tokens for all our tiny spells. Classic spellslinger cards like Primal Amulet and Mirari will also give us multiple Addendum payoffs. I'm a fan of The Mirari Conjecture too, which resupplies a few key spells before giving us an explosive turn on chapter three. Oh, and Spelltwine is great for repeating those awesome Addendum effects, too.

And, referring back to Noyan's commander page, we can't forget a few of his Signature Cards:

To make room for our Addendum payoffs, I didn't include all the classics. However, I think you'll dig the ones you'll find in the list. Here it is!

An Addendum to the Article About Addendum

Addendum is an atypical mechanic that invites us to play in a sometimes counterintuitive manner. Do you pass the turn so you can counter a spell? Or do you go all-in on your own turn for the bonus?

I think this deck and its signature mechanic will appeal to players who enjoy making complex decisions every turn. It almost goes without saying, but lawyers will like it, too!