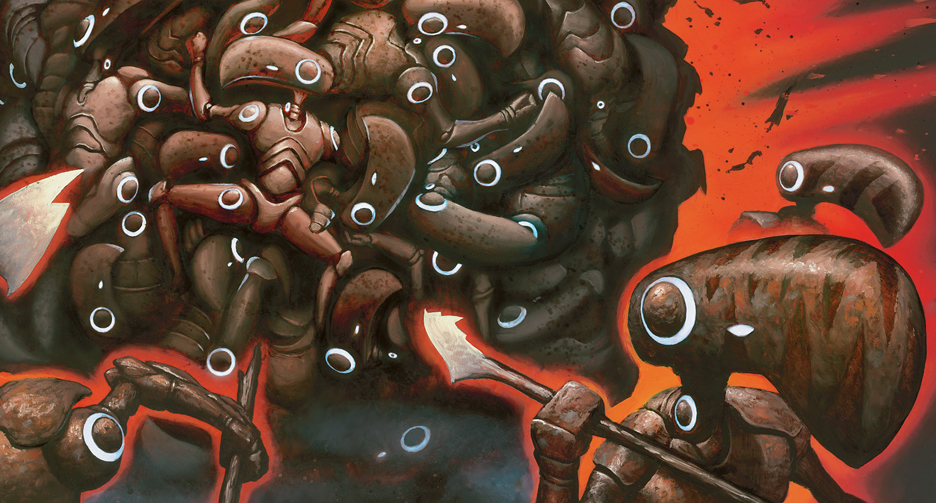 A Brief History of Affinity

In the Mechanically Minded article series, we build EDH decks around Magic mechanics using the data of EDHREC. Today, we're building around Affinity.

Affinity first appeared in 2003’s Mirrodin. A spell with Affinity checks how many permanents of a particular type you control, or your Affinity for that permanent, then reduces the spell's casting cost equal to that number of those permanents. As an example, all Affinity cards in Mirrodin had Affinity for Artifacts, so the casting cost is reduced by one for each artifact you control. Innocuous, right?

Turns out, naw: Affinity is busted! It reduces only generic mana costs, yes, but many Affinity artifacts are all generic, meaning you can easily cast them for free. This insane synergy creates game states that quickly snowball out of control and become problematic that several artifact cards received emergency bans from Standard (though ironically, none of those cards actually had the Affinity mechanic).

Affinity appeared once again in Mirrodin’s sequel, Darksteel, and this time with a twist: Affinity for all five basic lands, as seen on cards like Spire Golem. However, these only appeared on a cycle of commons, and were therefore not nearly so broken.

Perhaps unsurprisingly, Affinity has never resurfaced again. Or has it?

Magic’s newest set, Throne of Eldraine, has its share of wacky cards. This one jumped out to me as one of the wackiest:

Though she'd probably enjoy swimming at the local YMCA more than this lilypad-infested lake—er, loch—Emry appears content to hand out artifacts to random passersby. And though it doesn’t say so explicitly on the card, Emry effectively has Affinity. After all, her cost is reduced by one generic mana for each artifact you control.

That's not even the best part; Emry's tap ability presents some tantalizing options for an Affinity deck. To build around this mechanic, she's the perfect candidate! Let’s dive in.

This might seem like an odd place to start, but I believe it’s the best. Why? Because Emry costs three minus the number of artifacts we control (with a minimum cost of one blue), which means that we can cast her as early as turn two, so long as we have at least one artifact in play. Here are a few cards that fit the bill:

These cards act as mana rocks without tapping for mana. Many of them, such as Aether Spellbomb, still have value in the late game (bouncing an opponent's best creature every turn, for instance).

However, why pay one mana when you can pay none?

These are low-impact on their own, yet can lead to Emry as early as turn one. Seat of the Synod plus Ornithopter, for example. That’s the kind of start Affinity is known (and despised) for.

What? That’s the only Affinity card on her page? I do like a draw-two effect for one mana, sure, but there must be more than that! Let’s dig deeper into EDHREC to see what we can find. The Mirrodin set page should be a good place to find more.

Now that’s more like it. Myr Enforcer and Frogmite are vanilla creatures on the battlefield, but most of the time, we'll cast them for free. There's also Assert Authority, which will most of the time act as a Counterspell that exiles its target. I like that.

Whir of Invention might look difficult to cast, but triple blue doesn't hurt so bad when it's our only color. What’s more, we'll have enough artifacts to cast pretty much anything. Just imagine it: "On your end step, I play Whir of Invention to find Myr Battlesphere. Okay, untap, upkeep, draw...."

Then there’s Reverse Engineer, another outstandingly efficient draw spell along the lines of Thoughtcast. Finally, Chief Engineer offers pseudo-Affinity to all our artifacts. Note that one may tap to Convoke even if a creature has summoning sickness. So if circumstances allow, you can chain multiple artifacts together with this dude.

While we’re on the subject, let's not forget this card:

It actually appeared in an earlier draft of the full decklist you'll find below. I cut it.

Why? Because our deck is almost half artifacts, leaving little room for the nonartifact cards Statuary discounts. Definitely a powerful card, but not the right fit for this particular build.

While we're on the subject of artifacts, let's not forget Metalcraft, another plane-of-Mirrodin special that keys off of controlling three or more artifacts. We’ll head to the page for mechanic’s home set, Scars of Mirrodin, for more info:

Etched Champion appears on the shortlist of most annoying cards of all time. As long as we have Metalcraft (and we’ll always have Metalcraft), there are very few cards in the game that can target, damage, block, or enchant our Champ; EDH is a singleton format, but Stoic Rebuttal acts as our third copy of Counterspell (don’t forget Assert Authority). Finally, Argent Sphinx. Aside from being named after The Zombies keyboardist Rod Argent, this Sphinx is best known for being even harder to kill than Etched Champion. Just don’t tap out, okay?

Our primary mechanic for this article is Affinity, true enough. However, we can’t forget that our commander casts artifacts from the loch—I mean, graveyard. Therefore, let’s wade into some ways to get more cards there.

My favorite part about these cards is that they add to our artifact count while also doing stuff, meaning they pull double-duty: Perpetual Timepiece mills us and even protects our graveyard from Bojuka Bog. Mesmeric Orb mills us and our opponents. Altar of Dementia is one of the deck’s unsung heroes; it mills us and even serves as a potential win condition. Speaking of which...

All this Affinity nonsense is well and good, but we do need (at least a few) ways to win the game. Let’s start here:

We’re playing almost exclusively artifacts, so The Antiquities War will certainly draw us a card when it enters. Next turn it should draw another, and if our opponents don’t answer it by the third chapter, we’re very likely to slay at least one opponent. 5/5s are big, and with 40+ artifacts in the deck, we should have enough on the battlefield to make some noise.

I don’t think Mirrodin Besieged needs much explanation. I’ll just point out that our commander mills us for four when she enters the battlefield, so that helps with the whole '15 artifacts' thing. I think they should’ve used Baron Von Count's "destroy target player" lingo, but that's just me.

Lastly, Aetherflux Reservoir. Talk about destroying players. That's nice, but it's not even my favorite part of this card. I love that it can target creatures. At the Overkill Olympics, the Reservoir wins Gold.

There are a lot of them in this deck, and they are indeed crazy. Here are two of my favorites.

This one isn’t infinite, but it’s still pretty fun. First, sacrifice Corridor Monitor to Witch’s Oven. Since it has four toughness, you get two Food tokens (never mind that you’re making pie out of metal). Next, tap Emry to recast the Monitor. Now you get two triggers: the Monitor untaps the Oven, and Mirran Spy untaps Emry. Repeat as many times as you can afford. Talk about an Easy-Bake Oven.

Make sure you’ve got Emry, Psychosis Crawler, Vedalken Archmage, and Mirran Spy in play and Hangarback Walker in your graveyard. Tap Emry and target the Walker. Cast the Walker for zero. This triggers Spy and untaps Emry. It also triggers Archmage, which in turn triggers Crawler. Repeat 40 or so times until all opponents are dead.

Note: This combo also works with Chakram Retriever in the place of the Spy, or Liquimetal Coating and Dross Scorpion in there instead.

When playing the deck, here's your first order of business: cast Emry as soon as possible.

When evaluating your opening hand, look for these three components: a one- or zero-mana artifact and two lands. If you have them, you get to cast your commander on turn two. That might not sound like much—at least until you start playing the deck. From there, try adding an artifact or two to the board every turn. The more artifacts you have, the more Affinity spells you’ll be able to cast.

I like this deck because of its versatility. It can win a fair game or it can combo off. Furthermore, it plays on several axes (filling the graveyard, battlefield, and hand), which makes it difficult to counteract. That said, it’s also pretty tricky to play. If your opponents are playing assertive decks, fight back with powerful board-affecting spells such as Myr Battlesphere. If opponents play a more defensive game, seek out the combo pieces and win that way.

Enjoy the deck, and let me know which mechanic you'd like to buld around on the next Mechanically Minded!