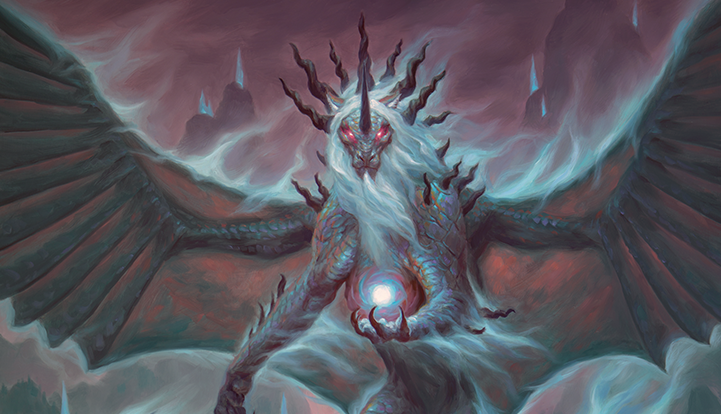 What's the scariest thing about a big monster? The chance it might not be done growing yet.

Welcome to Mechanically Minded, the article series where we build EDH decks around mechanics using the magic of EDHREC. With a new set comes new mechanics, so let’s start with the newest (and by far the weirdest). It’s called Mutate.

Aside from the most rules-intensive keyword since Banding? It's a pretty sweet concept. Confusing yes, but flavorful, too. And it plays smoother than it reads.

Think of Mutate like Theros’s Bestow. Creatures with Mutate can be cast as normal, or they can be combined with non-humans for an alternate cost. One goes on top, one on bottom—your choice. This new amalgam has the name, color, abilities, power, and toughness of the top card, along with all the abilities of the bottom card.

"But what happens when it gets blinked?" you ask. I'll leave it to judges to answer all the corner-case questions (plus I don't feel like getting dog-piled by the comments section). I'm just here for the fun.

Unlike energy counters, Mutate came loaded with potential commanders. Each color wedge has at least one legend that keys on Mutate, and C20 launched an entire preconstructed deck devoted to the mechanic. Among those myriad options, this is perhaps the most obvious pick:

I mean, it’s got the mechanic right on it, plus it interacts with other creatures bearing said mechanic. That’s awesome... but it’s also a little predictable. Plus, I’ve already built my share of Sultai decks in this series, so I opted for another commander. Let’s take this thing for a spin:

Now this is how you keep a Mutate chain going. Our headline mechanic is found only on creatures, and last I checked, creatures are nonland permanents. Therefore, if we construct a deck wherein almost all nonland permanents are creatures with Mutate, we've got a great chance to hit one when our commander Mutates. And remember, the whole pile triggers every time a new creature Mutates onto it.

Is that the optimal strategy? Probably not. But is it sweet? You bet your apex it is.

Note: We're including pretty much all Mutate creatures possible in this deck. So as not to put you to sleep, I'll only cover the coolest ones. Like these:

Sawtusk Demolisher is Beast Within on a stick feat. Mutate, which is pretty sweet—particularly because we might use the beast tokens. With Beast Within, you rarely trade a nonland permanent of your own for a 3/3 token. But Demolisher offers a 6/6 body that trades lands for 3/3s if we flood out. Finally, since we’re investing so many cards and mana into one creature, we’re highly susceptible to Diabolic Edict-style effects. Creature tokens protect us from them.

Illuna already has flying, so Souvenir Snatcher is redundant in that respect. However, I think the Mutate trigger is worth it. That lets us nab mana rocks, which is extra nice since we’re only playing one ourselves (remember, we're building an extreme Mutate deck). We'll still have ramp in the form of Cultivate and the like—just no rocks. And hey, stealing a Shadowspear sounds fun, too.

Finally, Sea-Dasher Octopus should trigger plenty when combined with Illuna, who has both flying and trample. Plus, I like that you can flash Mutate it, which should mitigate the efficacy of sorcery-speed removal.

Glowstone Recluse doesn’t sit quite where we’d like on the curve, nor do we care about reach when we already have flying. However, +1/+1 counters on a Mutate creature are a big boon since they count toward the creature’s final power and toughness. Illuna starts as an 8/8 after Mutating onto Recluse and only gets larger from there.

Pollywog Symbiote is a solid Mutate enabler (and clearly more fun when played as the Babygodzilla version). The cost reduction and the looting are nice, and you can Mutate onto the Symbiote itself if need be.

And then we have everyone’s favorite 1/1 for one, Slippery Bogle. Maybe I’m just hyped about the novelty of finally getting a legitimate reason to play this card in EDH. But really, I think it’ll be quite effective. My only recommendation is to sandbag it until you can Mutate. With Illuna, for example, wait until seven mana so you can go Bogle into Mutate. Playing it on turn one puts you at unecessary risk of losing it to an early board wipe.

Think of yourself like Professor X. These Mutants are under your care, Charles.

We’ve already covered how Sawtusk Demolisher defends against Edicts, Slippery Bogle defends against direct removal, and Babygodzilla defends against shortages of silliness. But since we’re playing such an all-in strategy, I believe we need even more tech to defend our creatures.

Since we’re playing a style similar to EDH’s classic Voltron theme, let’s head to that page for some defense against the average opponent. Some nice ones:

Darksteel Plate needs little explanation. When combined with the aforementioned Bogle and a Mutate creature, the Plate makes your favorite mutant pretty much unkillable outside a Merciless Eviction. There might be some merit to playing Hammer of Nazahn instead, but since we're running no other equipment and the Hammer's equip cost is twice as expensive, I vote for the Plate.

Simic Charm is low-key powerful in this deck because it protects against pretty much all kinds of removal. The Hexproof option thwarts targeted removal, while the bounce option saves a mutant from a board wipe. Note that bouncing a Mutated creature returns the entire pile to its owner’s hand. Sure, we’ll need to rebuild our monstrosity. But at least we saved all the pieces.

Not much needs to be said about Heroic Intervention. It’s great. You’ll enjoy playing it.

Flickering a Mutated creature is a little different than bouncing it. Casting Ghostly Flicker, for example, returns all creatures in the pile to the battlefield as separate creatures. That might sound bad, but it could prove advantageous.

Imagine you’ve Mutated Illuna three, four, maybe even five times. You’ve probably got a total of something like 20 power in that stack, yet stats don’t accumulate on Mutated creatures. However, you could cast Ghostly Flicker on your Mutant on an opponent's end step, then hit them for a surprise attack on your turn. Might not happen often, but I think it’s worth including the card nonetheless.

This good ol’ Alpha stalwart interacts favorably with Mutate creatures. Clone copies not only the name, color, stats, and abilities of the creature atop the Mutate pile—it also gets all abilities of all cards within that pile, too. So if you have Archipelagore on top and Illuna below, Clone becomes a 7/7 blue leviathan with flying and trample, plus two Mutate triggered abilities.

But beware! If the top card in your Mutate pile is a legendary creature, the legend rule will apply and you’ll need to sacrifice something. Therefore, make sure you have a non-legend atop the Mutate stack before Cloneing anything.

I fell in love with Seasons Past the moment Jon Finkel used it at Pro Tour Shadows over Innistrad. Though our deck isn't fully optimized to break it, I think it's an excellent way to recover from removal. For instance, imagine we've constructed a Mutated monstrosity featuring Pollywog Symbiote, Dreamtail Heron, Illuna, and Archipelagore. Opponent casts Doom Blade. Sad face.

Or not. Seasons Past returns all three Mutants to our hand, plus a land and any other cards at appropriate CMCs. Thanks to Johnny Magic for introducing me to this thing.

My last bit of Mutate tech…

This card is already nasty, and it gets even nastier when Mutated upon. Cast it at five mana, then Mutate with Illuna the following turn. The result is a 10/10 beater with flying, trample, and pseudo haste. When it attacks, you still get to double all those counters. Two swings with this and somebody’s dead on commander damage alone.

As Frazier was to Cheers, this secret deck is to our original build. Notice how Illuna exiles cards until it hits a nonland permanent? Unlike many similar effects, those cards are permanently exiled, not placed back on the bottom. This creates some weird possibilities.

Basically, your entire 99 would contain lands plus instants and sorceries that draw cards, ramp, interact with opposing creatures, or—most importantly—create creature tokens. We need something to Mutate onto, after all. The only nonland permanent in the deck: Jace, Wielder of Mysteries (or Thassa’s Oracle). Dig to your desired win-the-game permanent, then Mutate with Illuna. Doing so will exile your entire library, since you only stop exiling when you hit a nonland permanent, and you won't have any left in the deck. Then play your Jace or Oracle and win.

Look, I’m not recommending you try this at home. I just think it’s a sweet alternate version of the deck. Alright, back to our regularly scheduled programming.

Be careful with your curve when constructing this deck—or any deck that relies on Mutate, for that matter. Since Illuna Mutates on turn six, you’ll want several five drops that combine well with it. If you’re not opposed to leaving it open to removal, plan to cast it as a creature turn five, then Mutate for six from another creature the following turn.

Other than that, Mutate away. Be mindful of which opponents might have an Edict effect and when they might play them. But don't let up on the gas, either. You're creating the biggest, baddest beast you can—and collecting Mutate triggers along the way.

Enjoy the mechanic. I know I will!