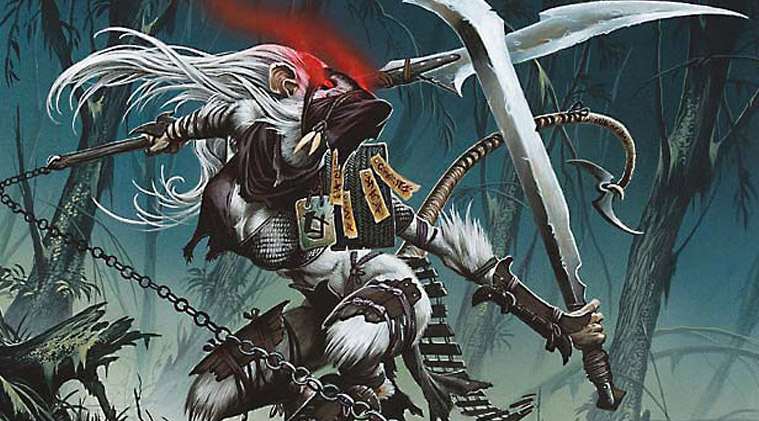 You loved them in Mortal Kombat. You loved them when you read about them in the Magic Treehouse books (or was that just me?). And you probably loved them when they first appeared in Betrayers of Kamigawa, despite them being criminally under-supported. Their signature mechanic is, of course, Ninjutsu, and this week on Mechanically Minded, we're going to build around that exact mechanic. The obvious starting point is Yuriko, the Tiger's Shadow. This is the new Ninja legend from Commander 2018, and she does not disappoint. If we're building around Ninjutsu, I believe she's the best commander for the job. I considered Etrata, the Silencer or even Higure, the Still Wind, but they ultimately can't compare. Cue "Eye of the Tiger," because we're playing the Tiger's Shadow.

Before we proceed, check out this line of Yuriko's rules text from Gatherer:

Now that is sweet! She completely disregards commander tax. We'll save tons on mana, which means we'll be less reliant on mana rocks and the like. Let's keep that in mind for deckbuilding.

Anyway, let's begin our search as always with our commander's home page. The Signature Cards are a perfect place to start, since they synergize nicely with our commander (and therefore our mechanic). Here are some that fit nicely into our deck:

To build around Ninjutsu, we want several components. First, we want evasive attackers. Second, since Ninjutsu returns the attacker to its owner’s hand, we want creatures with enter-the-battlefield triggers. Third, we want cards that themselves have Ninjutsu. If we can get two of those conditions (or even all three) on one card, we're happy.

Let’s start with the evasive attackers. We've already got a few above, so let's go a little deeper.

I love when a mechanic encourages us to do something counterintuitive. Since Yuriko can Ninjutsu on turn two, we’re actually pretty happy to play evasive one drops such as Triton Shorestalker and Slither Blade. We cast them on turn one, swing on turn two, then sneak out our commander. There’s really no fear in doing this because remember, even if Yuriko gets swept away in a board wipe, her Ninjutsu ability totally disregards commander tax. We can play her again at the same price!

Here’s a look at some of the best payoffs in this category:

Trigger the ability on the way in, then bounce it back to your hand with Ninjutsu to trigger again later. Yes, please. Man-o'-War has some nice utility in this deck. One can either use the bounce ability to bounce opponent's creatures, or to bounce your own Ninjutsu creatures back to your hand. I like the flexibility there. I'd also like to draw your attention to Tetzimoc, Primal Death. I think it’ll be sick in this deck. Our numerous cheap spells promise lots of excess mana to spend on the single-black activation cost. Once we hit six, we cast Tetzimoc for a big board wipe. The next turn, we can attack with it and Ninjutsu it back to our hand, starting the whole process again. Unless our opponents have a way of dealing with that, it’s going to be a painful game for them.

Our third category is cards that have Ninjutsu themselves:

Higure's always been one of my favorite cards. It's nice to finally be able to include him in a deck without feeling guilty. Thanks, Yuriko!

The commander's page is only the tip of the iceberg for building around mechanics on EDHREC. I also love to check out the themes section. Look for themes that align with your mechanic or otherwise play nicely with it. For example, we mentioned we want enter-the-battlefield triggers. So we should take a look at the Blink theme.

Panharmonicon feels like a nice addition here. If we can double up on Mulldrifter, Throat Slitter, and Gonti, Lord of Luxury activations, I'll be happy. Whirler Rogue is another nice one since it combines two categories we want: an ETB ability and evasiveness. Glen-Elendra Archmage is also a sweet find. Just imagine this play pattern: Use Archmage to counter a noncreature spell. The Archmage dies, but comes back with a -1/-1 counter. Next turn, attack with the Archmage and Ninjutsu it back to your hand. Then recast it and get your free counter again. Love it!

The Monarch theme also caught my eye, since both it and Ninjutsu are all about dealing combat damage. In my experience, if you find mechanical overlaps like this, cards with either keyword fit nicely together. For example, since we’re running so many evasive creatures to enable Ninjutsu, we should almost always be able to reclaim the Monarchy if it’s taken from us. Some cards to consider:

I could see these falling out of favor if they draw too much hate our way, but for the deck’s first draft, I’m interested in trying them out.

Rounding It All Out

Yuriko has more text than just Ninjutsu. We should also take a look at her second ability. It's a powerful payoff for two reasons: first, it puts cards in our hand (and everybody likes that). Second, it makes all of our opponents lose life equal to that card's converted mana cost.

I'll repeat that. All of our opponents. Normally the weakness of a deck like this would be that we don't deal enough damage (remember, we're playing a lot of 1/1s). This ability changes that.

So how do we play low-cost creatures and maximize Yuriko's damage output? Let's start with Delve. Delve was a headline mechanic in the recent Ultimate Masters. It's perfect for casting high-cost cards without actually paying a high cost, if you know what I mean. Treasure Cruise, for example, will deal a whopping eight damage to all opponents when flipped with Yuriko's ability. Yet we’ll often cast it for just four, three, or possibly even fewer mana. The same goes for cards like Dig Through Time, Murderous Cut, and Temporal Trespass. Cards with Miracle are similar in that they'll deal a lot of damage, but at their best, don’t cost much to cast. The classics include Devastation Tide and Temporal Mastery.

To better enable this subtheme, a light splash of classic blue one-mana cantrips can’t hurt either, so long as they put high-cost cards atop our deck. I’m thinking Ponder, Preordain, and Brainstorm. If you’re feeling especially cheeky, why not Sensei’s Divining Top?

Finally, since we’re also employing a light tribal theme (almost all Ninjas have Ninjutsu), we’ll want to include some tribal elements. Here are a few cards we should consider:

Okay, that last one might be a little too cute, but I think it’s worth a try in the deck’s early draft (also, Lorwyn is my all-time favorite set). With so many cheap creatures, we’ll want a few places to sink excess mana. Plus, adding the Ninja type onto our evasive attackers draws us extra cards and nets additional damage to our opponents.

Let's see what all this looks like put together!

Building around Ninjutsu gives us a unique deck with several interesting aspects. We’ve got efficient creatures, evasiveness, enters-the-battlefield effects, topdeck manipulation, cost-reducing spells, and even a splash of tribal goodness. Sounds pretty good to me. How about you?