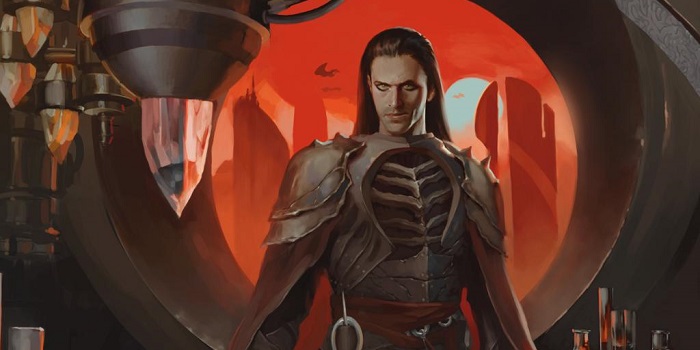 I know, it's cheeky to call the Modern Horizons set "Commander Horizons" instead, but let's be honest, there are some extremely cool cards coming up in this set that we EDH players should be very excited for! We have returning mechanics, awesome lore characters, and even support for cool tribes.

Hold on, I am trying to collect my thoughts that do not just jumble together into drool over this card. It's rare to see a card that checks so many boxes. He's powerful, he's a value engine, and he's a Vorthos home-run, right down to the protection from Humans.

As a card in the 99, expect to see him follow a similar trajectory to Yahenni, Undying Partisan. Commanders like Meren of Clan Nel Toth and Teysa Karlov are always happy to have additional sacrifice outlets, especially when those sacrifice outselts also help draw cards, and Hapatra, Vizier of Poisons couldn't be happier to see all those -1/-1 counters.

At the helm of the 99, look to Endrek Sahr, Master Breeder and friends for inspiration. Creatures like Ophiomancer, Pawn of Ulamog and Reassembling Skeleton present excellent choices for sacrifice fodder. Of course, Yawgmoth isn't one to be pigeonholed into a singular strategy. Yawgmoth can turn tokens into card advantage, but with that Proliferate ability, he can also become a home for mono-black superfriends, or a very dastardly Infect commander. I fully expect him and Urza to battle for the #1 spot on the Top Commanders pages for quite some time.

One of the first cards previewed for the set, this card is designed more for Modern than Commander, where it's much more realistic to blindly guess cards your opponents have in hand. It's possible Therapist could find a spot in metas who know each other's decks very well, or in some Telepathy-inclusive Sen Triplets builds, but it's not really a card for EDH.

Edgar Markov sits as the second most popular commander built in the past two years, and with new cards like Cordial Vampire, I can only imagine he'll maintain that popularity. Not only will your army get bigger as enemy creatures die, but Vampires have many sacrifices outlets built into their decks, which makes this a very deadly new addition. Consider him also for decks like Elenda, the Dusk Rose and Yahenni, Undying Partisan.

Most of us have probably seen snow-covered lands a time or two, especially when someone uses them in conjunction with Extraplanar Lens to collect value no one else can take advantage of. Well, now snow decks also have a variant of Mutilate, one that can work in a multicolored deck with lots of snow-covered basic lands.

I want to believe there is a solid snow deck to be made, but the sad truth is that there are only 40 total snow creatures in the game, so there are very few options to run that will withstand your own Dead of Winter. Regardless, I can still accept this as a cheaper, more splashable Mutilate.

The end of a cycle! From Morphling and Torchling to Thornling and Brightling we can rejoice at the tying up of loose threads. This is a solid battering ram against other creatures. With deathtouch and menace, it will be extremely difficult for your enemies to interact with this creature favorably in combat. Add in the Undying and it's even more of a nuisance. Unlike several others in this cycle, Endling isn't just a Shapeshifter, but has a second creature type: Zombie. As such, this may see play in some classic Zombie tribal decks like Gisa and Geralf as an efficient beater and an especially irksome blocker.

Speaking of cycles, the black part of the “Force of” cycle is a doozy. The timing restrictions make it a worse rate than a traditional Hero's Downfall, which can kill a creature regardless of when it entered the battlefield, but this is certainly an efficient answer to combos like Kiki-Jiki, Mirror Breaker + Pestermite or a huge influx of tokens. Look out, bursty token decks! Otherwise, though, this is a niche meta call if you're often up against aggressive decks that summon tons of creatures in one turn, but black has many other removal spells that will occupy this slot and be more effective in the majority of traditional games.

The community has been hungry for more Ninja cards for Yuriko, the Tiger's Shadow decks, and Modern Horizons has delivered! Yuriko is very aggressive, often not able to leave blockers behind, which means she can be targeted pretty easily. Throatseeker helps mitigate some of that life loss, a welcome addition. Meanwhile, Azra Smokeshaper is a tricky card that helps protect Yuriko in the combat phase. Yuriko has climbed up to the #3 most-built Dimir commander slot, and with the help of these great new Ninjas, I won't be surprised if she eventually sneaks all the way up to #1.

With a tribe as deep and potent as Zombies, there's always a risk that the tribe is already overcrowded and any new cards won't be able to fight their way into decks. Undead Augur, which is basically Dark Prophecy on legs, is potentially amazing but also potentially dangerous. Zombies are always hungry for card advantage, which could easily push this over the top, but lack of control over this ability makes me think there are better options for Zombies.

Whenever I see “Goblin” on the type line, I become very interested. Most Goblin synergies wind up in red, but Grenzo, Dungeon Warden and Wort, Boggart Auntie have well-known followings. Grenzo in particular probably represents the best synergies; Grenzo loves to sacrifice creatures, then put them on the bottom of his deck from the graveyard with things like Reito Lantern, and cheat them right back into play with his bottom-of-the-library ability. Warteye Witch works amazingly well here too, since she can help scry fun new targets to the bottom of the deck for Grenzo!

The Shapeshifters of this set pique my interest more than usual. This set has Goblins, Ninjas, Zombies, Vampires, and then some. Changeling Outcast work amazingly well to enable Ninjutsu and to trigger Yuriko, a welcome addition. There are probably better options for recursion in black, but it's not impossible that a few tribes would enjoy a tribal Gravedigger to recur their fallen soldiers, like sacrifice-happy Vampires or Inalla, Archmage Ritualist's ETB-triggering Wizards.

Of the remaining spells, the three above strike me as the most interesting in EDH. Defile has already gotten attention in Pauper, but a single-target version of Mutilate for one black mana at instant speed seems great for most mono-black decks, possibly as a supplement or a replacement for the occasional Tragic Slip. Mind Rake's Overload ability is fun in a deck primed to abuse it, such as Nath of the Gilt-Leaf, though it's notable that Delirium Skeins only shows up on about 600 total decks on EDHREC. Finally, Return from Extinction is a decent recursion spell in tribal decks thanks to its low mana cost, possibly budging out any decks still playing Aphetto Dredging. For these three cards, I predict the order of popularity, from highest to lowest, is the same order the cards are displayed above.

The Night is Darkest Just Before the Dawn

What are your favorite black cards from Modern Horizons? What cards are you putting into your decks? Are there any spicy cards I missed above? What cards are on your radar? Let me know in the comments below!