Power Sink - Chatterfang: Off the Walnuts 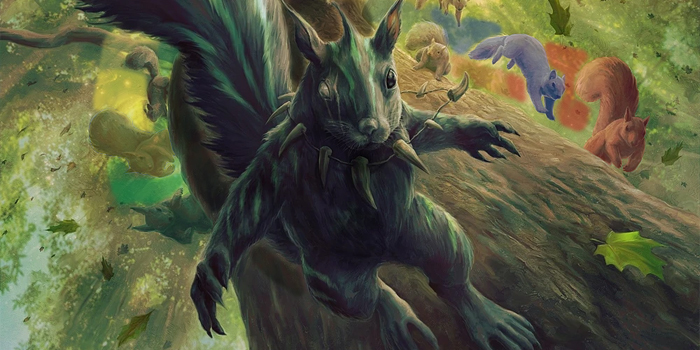 Hello, and welcome back to Power Sink, the article series where we take a look at the commanders that are just nuts, crack their shell, and make a-corny joke or two. It's about time I dug up the Chatterfang, Squirrel General idea I was storing for the winter.

Chatterfang was released in Modern Horizons 2 to widespread acclaim. Commander players were happy to finally have a dedicated Squirrel commander, and the stats on EDHREC prove it, since he commands over 8,422 decks on the site. This makes Chatterfang the 16th most popular commander overall and second most popular in Golgari. Not to roast Chatterfang over an open fire, but this "adowwable widdle guy" can be quite a menace, and Squirrels went from being a meme deck to a mean deck overnight.

Chatterfang can quickly build an army thanks to its ability to generate extra Squirrels for each token you make. Chatterfang can also sacrifice those Squirrels at the cost of a single black mana to give a creature +X/-X until end of turn. This versatile ability can be a boost to power or creature removal, with the latter making it difficult to keep all but the biggest beaters on the board. This is already quite a lot for a three-mana 3/3, but they decided to throw forestwalk into the mix, too! Being in black and green, Chatterfang also has access to the best in ramp, tutors, and recursion, as well as excellent options for removal and card draw. Let's take a look at the average list and see what people are building.

Unsurprisingly, we see a bunch of Squirrel cards. Squirrel Sovereign, Drey Keeper, and Deep Forest Hermit are useful lords, while Acorn Harvest, Chatterstorm, and Verdant Command make sense as token-producers. These cards are innocuous, but Chatterfang will make Squirrels if you produce any kind of token, and that's where things get scary. Scute Swarm and Tireless Provisioner make tokens on Landfall, which is amazing with Awaken the Woods, fresh out of The Brothers' War and into Chatterfang's average deck.

Pitiless Plunderer is the most terrifying synergy with Chatterfang. Plunderer gives you a Treasure whenever any of your creatures die, including tokens, which Chatterfang will see and give you an equivalent number of Squirrels. This means you'll continue to have the mana and the Squirrel to use Chatterfang's sacrifice ability, which you can use to kill all of your opponents' creatures at instant speed. Adding Doubling Season or Parallel Lives will give you infinite Treasures and Squirrels. With all of this death going around, aristocrat effects, such as Blood Artist, Bastion of Remembrance, and Nadier's Nightblade, will make quick work of the table. If you prefer to keep your Squirrels alive, you can just drop a Craterhoof Behemoth or Beastmaster Ascension and end it with combat.

Now that we've talked about the average deck, let's see what ideas we have squirreled away for powering down Chatterfang.

We're going to have our Squirrel general lead the charge in a Voltron deck! While Chatterfang is probably more suited to a token or aristocrat deck, he's "nut" so brittle that he can't wade into combat himself. He's got built-in evasion, a way to boost his power, and the tokens he makes are a good defense against the edict effects that tend to plague Voltron decks. We may be focusing on Chatterfang as an attacker, but we still want to produce Squirrels to block, be fodder for our commander's activated ability, or attack if need be.

We left in many of the Squirrel-producers from the average deck, like Acorn Harvest, Squirrel Nest, and Deep Forest Hermit. Nested Shambler works great with all the power-boosting effects if we aren't using them on our commander. Wand of Orcus has been making a splash in Zombie decks lately, but in our deck those Zombies we make will come with Squirrel support. We also don't want to discount the value of deathtouch. It's often enough to deter blocking, and since the Wand gives it to all attacking or blocking Zombies as well as the equipped creature, so this will likely keep us safe from a crackback.

Scepter of Celebration makes a bunch of Citizens if we can connect with an opponent, and since it gives +2/+0 and trample, we're more likely to do so. Because we can make so many tokens, it's likely we can fire off a Necrotic Hex and still keep our commander. Getting six Zombies and as many Squirrels after everyone sacrificed six creatures is a good spot to be in.

Any self-respecting Voltron deck has ways to power up its commander. Since we're creating tokens, we can make good use of effects that boost a creature based on the number of creatures we have. Alpha Status and Stoneforge Masterwork increase power and toughness for our other Squirrels, while Sigil of Valor gives a huge boost when we attack alone. Staff of Titania serves double duty as a pump effect and token-maker. With all the green creatures we'll have entering the battlefield, Ivy Lane Denizen is going to give us a ton of +1/+1 counters to throw around, even though we cut the Scurry Oak it goes infinite with. Finally, if we choose to attack with our token army, Strength in Numbers can be a nasty surprise.

When brewing this deck, I had intended for Chatterfang's ability to be primarily used to boost his power. We may have cut Blood Artist and friends from the deck, but we can still profit from all those Squirrels we're sacrificing. Moldervine Reclamation made its way from the average deck so we can draw a ton of cards. Blade of the Bloodchief and Sadistic Glee put a +1/+1 counter on whatever they/'re attached to whenever any creature dies. We don't have any Vampires to get full value out of the Blade, but it's still going to be enough. Ghost Lantern only gives counters for creatures we control dying, but we can also hold onto it and use its Adventure to avoid commander tax or get back a useful creature. Finally, Fallen Ideal lets us sacrifice the creatures we can't with our commander, has the added bonus of granting flying, and is just a difficult card to remove.

Evasion is another crucial component to a Voltron deck, and fortunately Chatterfang comes with his own in the form of forestwalk. 13 of the top 20 commanders on EDHREC contain green, so you have a decent chance of Chatterfang being unblockable in any given pod. We don't want to rely on that, though, so we have a few tricks to make sure our opponents have Forests. Yavimaya, Cradle of Growth also shows up in the average list since it turns all lands into Forests. Verdant Mastery and Yavimaya Dryad fit into our ramp package, but we can also use them to give an opponent one of our Forests and watch them struggle to get rid of a basic land. Mask of Griselbrand is great for the flying and lifelink we get, but it's also a nice insurance policy if our suited-up creature dies.

I thought this commander was going to be a tough one to crack, but it came together much better and easier than anticipated. Chatterfang's abilities work quite well for Voltron with the right cards, and adding tokens to the mix gives you a way to pressure your other opponents. Is it stronger than the token or aristocrat version? Probably not, but I think it's a fun direction to take the deck, and Golgari Voltron is pretty unusual outside Skullbriar, the Walking Grave. Even if you weren't interested in changing over your Chatterfang deck, I think a lot of the cards we discussed fit easily into more typical decks.

That's all we have time for! Let me know in the comments if this was a good idea, or if I'm just nuts!