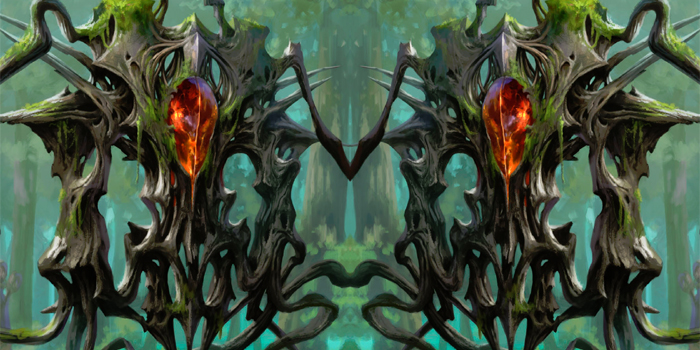 (Kodama of the East Tree | Art by Daarken)

All the Single Ladies

Hello, and welcome to Power Sink, the article series where we take the commanders with abilities and strategies that tend to get singled out and we show everyone they aren't so one-dimensional. This time we're discussing a spicy number from Commander Legends: Kodama of the East Tree.

Kodama boasts the powerful ability to put permanents into play from your hand whenever another permanent of equal or greater value enters your battlefield. Cheating mana costs is a powerful ability, but the way Kodama does it is on a whole other level. Because it cares about permanents entering the battlefield, you get the effect if you blink or reanimate something in addition to casting. Lands and tokens will also set off Kodama's ability, and while those tend to have zero mana value, you can still put lands into play, making Kodama a powerful ramp engine. Since the card you're cheating in isn't cast, it makes half the permanents you play uncounterable and they can respond to the ability, they won't even know what you're putting down until it's too late. Really, the only thing holding this ability back is your capacity to get mana and cards in hand, but green is well-suited to solve those problems.

Kodama is already a strong card on its own, but you can add whatever color you like to supplement that incredibly powerful ability thanks to it having Partner. It shows up as the co-chair of 4,601 decks on EDHREC. Sakashima of a Thousand Faces is the most popular pairing, at 856 decks. Simic is already a famously powerful color identity, and this Partner combination creates a powerful synergy. Once you have a clone of Kodama, the permanent entering from one Kodama will trigger the other, creating a feedback loop and likely empty your hand. This can generate infinite mana with a bounce land, like Simic Growth Chamber, or draw through your deck with something that draws cards when it enters the battlefield, like Keruga, the Macrosage.

Toggo, Goblin Weaponsmith is another common Partner for Kodama, at 748 decks. This pairing makes an explosive Landfall deck. The Rock token that Toggo makes will trigger Kodama, allowing you to put out another land, making another Rock. This lets you put out every land in your hand, or if you have Gruul Turf you can get infinite Landfall triggers for cards like Tunneling Geopede and Tireless Provisioner.

Kodama's third most popular Partner is Tymna the Weaver, which tends to be a hate bears deck where Kodama's ability to cheat in permanents is excellent for breaking parity with cards like Rule of Law and Archon of Emeria.

With so many Partner options, what are we doing to tone down this singularly strong legend? We're going to ask the same question Ann Wilson of the band Heart has been asking since 1987 and that I ask when I feel compelled to belt out the greatest hits of the 1980s in the shower: How do I get you alone?

How Do I Get You Alone?

Though in this case it's more like how do I get you a clone? We're going to eschew giving Kodama a Partner while trying to recreate the effects we can get from having Sakashima with a bunch of clones. Of course, this is less powerful and consistent than having the effect in the command zone and adding a second color, but that's what we do here on Power Sink.

While we won't have Sakashima in the command zone, we still have a few ways to ignore the legend rule. Mirror Gallery has no extra frills, but it'll get the job done. Mirror Box has the added benefit of providing an anthem for some of our creatures. Finally, we can attach Helm of the Host to Kodama to start making nonlegendary copies of it, or we can make copies of any other creature we want to attach it to.

Speaking of making copies, it turns out there are a fair number of ways in green and artifacts to copy creatures, though they aren't as flexible or efficient as the effects in blue. Keep in mind our token copies will have a mana value and will let us drop a similarly costed permanent with our commander's ability. Dual Nature creates a token copy of any creature that enters the battlefield, though that will also work for our opponents. Minion Reflector can make us temporary hasty copies of a creature entering the battlefield, which can be good for attacks or getting more out of an ETB effect, while Bramble Sovereign makes us a permanent token. Blade of Selves and Mirrorpool allow us to make copies of a creature already on the battlefield, while we can copy something on the stack with Lithoform Engine or from our hand with Soul Foundry.

Mimic Vat and Echo Chamber give us some ability to copy our opponents' creatures, though we won't have an easy time getting exactly what we want from them. We can make also make token copies of creatures in our graveyard by exiling them with Dollhouse of Horrors or God-Pharaoh's Gift. This serves as a way to circumvent commander tax if Kodama happens to die and is the simplest way for us to clone Kodama if we've managed to negate the legend rule. Once we've managed to make a few creature token copies, we can use Populate effects, like Selesnya Eulogist, Second Harvest, and Esika's Chariot, to add to our clone army.

One Way or Another

Making multiple Kodama's in mono-green is quite an achievement, but it's to likely to win the game. To that end we have some other cards to help us take down the pod. It turns out Oozes are pretty good at making copies of themselves, and quite a few are self-contained tribal engines, which not only fits our theme, but it's extremely helpful when we're dedicating so many slots to clone effects. Biowaste Blob is a powerful self-cloning engine in this deck. Not only does it generate a lot of power over time, but we're looking at getting multiple free four-drops off of our commander's ability every turn. Splitting Slime works along similar lines, though it's mana-intensive. Mitotic Slime along with the sacrifice outlets in the deck can flood the board with Ooze tokens, and if we do that, Biogenic Ooze will make them giant. Acidic Slime is past its prime as a format staple, but works wonderfully with our cloning apparatus.

Big stompy creatures are is what green does best and there's no reason for us not to make use of that somewhat. Pathbreaker Ibex is a prolific card in the format, showing up in 10,926 decks on EDHREC. Normally I like to use something more obscure, but this can get out of hand if we can make multiple copies. Wild Beastmaster is similar although we may have to get trample from other sources like Garruk's Uprising. If combat isn't an option, Psychosis Crawler lets us leverage the powerful card draw effects, like Collective Unconscious and Regal Force, into life loss.

Another One Bites the Dust

If I'm being honest, this is far from my favorite brew I've put forth for this series. It's a lot of work to make even the limited clones than you can in mono-green, and I could have a decent Power Sink deck with adding any other blue Partner commander, such as Esior, Wardwing Familiar, but I was stubborn and wanted to stick with a mono-green deck. That said, I think even a brew that I might consider a failure has value. Sometimes a theory craft can help you with other decks, you might consider cards and ideas you wouldn't. Even if I don't build this deck, I think the exploration of how to make copies of creatures outside blue and possibly red decks is useful in future deckbuilding. Maybe I might want to try monowhite clones someday, or maybe the cards I found might be perfect for a commander that is yet to be released.

TL:DR, it's okay to fail and I would love to hear about your deck ideas that didn't quite make it in the comments, especially if it contributed to a brew later down the line.