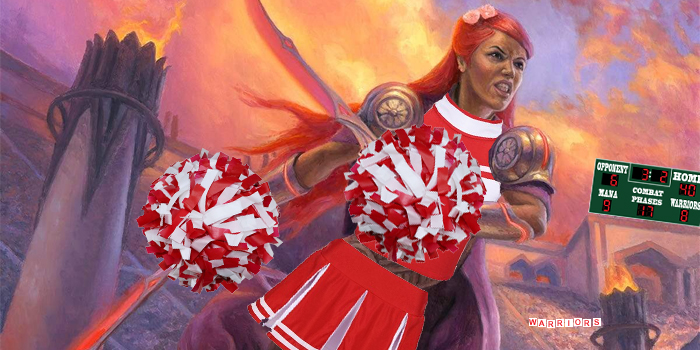 On Wednesdays, We Power Sink

Hello, and welcome to another year at Power Sink High, where we sit at the lunch table with the popular commanders that everyone secretly hates, and learn that they aren't so shallow after all. This time we're trying out for the cheer squad to hang out with Najeela, the Blade-Blossom.

Najeela is ranked #31 overall on EDHREC, with 3,484 decks to her name, and she's the fourth most popular five-color commander. She may not be at the top of the pecking order, but she definitely sits with the cool kids. Ever since she transferred from Battlebond in 2018, Najeela has made quite the reputation for herself as a mean girl among the more casual cliques, and she's quickly earned a spot in the cEDH club. Her ability to make tokens whenever a Warrior attacks means that her entourage is never far behind, and she doesn't even need to attack to make it happen, so she can have others do her dirty work.

Swarming the board with tokens is already strong, but on top of that, she can buy another combat step and give trample, haste, and lifelink to all attacking creatures, just by spending one mana of each color. Najeela is a powerful win condition just by herself, but as a five-color commander, she also has access to all of the best cards in the format. One look at her average deck and it's easy to see why so many Commander players have been personally victimized by Najeela George.

Najeela's average deck looks like a cross between Warrior tribal and her typical cEDH build. It contains a lot of tutors as well as efficient, narrow interaction cards, like Veil of Summer, Flusterstorm, and Silence. Also present are cEDH meta all-stars, like Drannith Magistrate, Dockside Extortionist, and Thassa's Oracle.

Since the only limit to Najeela's extra combat ability is having mana to pay for it, there are numerous ways to get infinite combats with her. If you can get at least five creatures through, Derevi, Empyrial Tactician can untap enough lands to buy another combat. Similarly, Nature's Will untaps all your lands if you can connect with at least one creature, and Druids' Repository gives mana just for attacking. These aren't even all the available options to generate infinite mana, and if you're looking for more, check out the combos page on EDHREC.

Even if you go strict Warrior tribal, Najeela can easily take over with her token production, and being a win condition all by herself leaves a lot of space in the deck to pack cards to improve the deck's consistency and resilience. As bad as her reputation is, I've got an idea for a Najeela deck that won't make your opponents say, "You can't sit with us."

She Doesn't Even Go Here

We're going to embrace the tribalism of high school and do three tribal decks, none of which are Warrior tribal. We'll have a base deck of 69 cards (70, if you count Najeela) that contains our ramp, draw, and removal, along with a few generic tribal cards. To that, we can add a package of 30 cards to make it a tribal deck with the intention of randomly selecting a tribe before shuffling up each game. This keeps the power level down, since a lot of the deck can't be devoted to synergy.

Because of that, there isn't too much to say about the base deck. Oblation and Chaos Warp are notable since we can use them on a token if we're desperate for draw or if we want to spin the wheel and see if we get a good permanent. Reflections of Littjara gives us a little more mileage out of our chosen tribe, while Etchings of the Chosen and Patriarch's Bidding keep our creatures on the battlefield. Artificial Evolution and Maskwood Nexus let Najeela be part of the tribe and synergize with whichever creature type you end up playing with. Arcane Adaptation and Xenograft can also do this, but I left them out because I don't want too much consistency for this effect.

It's safe to assume a large number of people spend time in high school thinking about boys (I certainly did). As a nod to that, we're featuring a deck of the best boys. That right, Dog tribal! While Dogs have technically been in the game since 1995 with the printing of Snow Hound in Ice Age, they didn't get much support until Core Set 2021. There isn't much in the way of tribal synergy with Dogs, but Ainok Bond-Kin and Longshot Squad give first strike and reach, respectively, to any creatures with +1/+1 counters on them, so we're making sure to employ a +1/+1 counter subtheme. Many of our Dogs, such as Trusty Retriever and Pako, Arcane Retriever, can get their own counters, while Supply Runners can give a counter to the whole team.

Felidar Retreat and Cathars' Crusade supplement our strategy, and the latter gets out of hand with our commander or with Rin and Seri, Inseparable. With all the tokens we'll be making, Dreadhound is going to make our opponents regret it if they decide to board wipe, and we can keep it or any other creature on the field with Resolute Watchdog or Selfless Savior.

Up next, Minotaurs are the 'jocks' of Magic: The Gathering. While this tribe gets occasional support, it's never been enough to put them in the top tier of Tribal decks. What Minotaurs are good at, though, is collecting keywords. We can get trample with Rageblood Shaman, deathtouch with Felhide Petrifier, first strike with Neheb, the Worthy, and haste with Kragma Warcaller. Sethron, Hurloon General is our star quarterback, bringing in tokens for every Minotaur we cast as well as providing evasion in the form of menace.

With so many keywords floating around, Akroma, Vision of Ixidor is an excellent cheerleader for our Minotaurs, giving them a huge power boost. If we don't need the creatures, Soulreaper of Mogis and Zedruu the Greathearted can use the tokens Najeela creates to draw some additional cards. Deathbellow War Cry is the game-winning touchdown for Minotaurs, tutoring the four best right onto the field.

So You Agree? You Think We Should Play Snakes?

Of the three versions of this deck, Snake tribal is likely the strongest. Partly inspired by the card Hooded Blightfang, we're running a deathtouch subtheme. Ohran Frostfang and Bow of Nylea give attacking creatures deathtouch, and it's important to note that this will trigger the Hooded Blightfang, draining life from our opponents. Sosuke, Son of Seshiro will destroy any creature our Warriors damaged at the end of combat, making it a nightmare to block our Najeela's tokens in addition to buffing our Snakes.

This version of the deck is also capable of generating a ton of Snake tokens. Sosuke's Summons makes two Snakes for three mana and we can get the card back when we cast one of the 24 Snake cards in the deck. Snake Pit makes a token every time an opponents casts a blue or a black spell, which you're likely to see happen in any given pod. Plus, for those opponents that love to draw cards, Xyris, the Writhing Storm will make a slithery army in no time.

Get in, Loser, We're Concluding the Article

While I could have used this idea with more popular tribes like Elves or Goblins, I think those tribes don't need the help, and would be hard to sell as a toned-down Najeela deck. I think you're going to get a lot less heat showing up to a pod with a Najeela deck where you randomly select an under-supported tribe. What's more, this is an idea you can continually add to, as there are so many "bad" tribes in Magic. If tribal decks aren't your thing and you want a powered-down Najeela deck, MJ of the MTG in Quarantine podcast has a colorless Najeela deck that uses only lands that produce colorless mana, and another friend who goes by the moniker 'Suns' brewed a color-cropped Boros Najeela deck.

Let me know in the comments any unusual ideas you've got for a Najeela deck, and which under-supported tribe you would build with her!