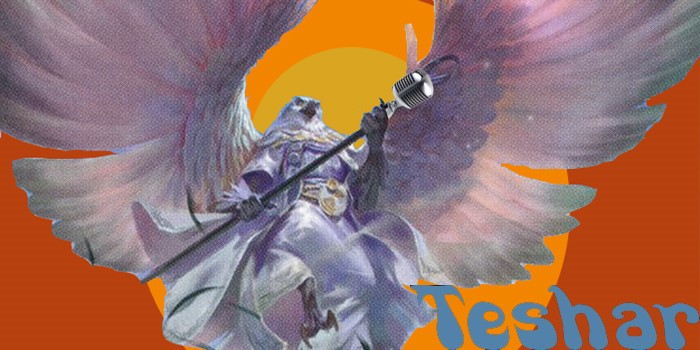 Hello and welcome back to Power Sink, the article series where we take the commanders that command R.E.S.P.E.C.T. and give them a brand new bag. This time we're taking a look at Teshar, Ancestor's Apostle.

Teshar looks a lot different from the commanders we usually see in these articles. First of all, he's much less popular, ranked number 244 overall on EDHREC, with 1,103 decks. Second, he's mono-white, which is considered by many to be the worst color loadout you can play in Commander due to subpar card advantage and a lack of ways to close out a game. Teshar overcomes the supposed weakness of his color with a deceptively powerful recursion ability. There's quite a bit you can do with mana-value-three-or-less creatures, and casting a historic spell is a low hurdle to clear to trigger this effect, since artifacts fall under this umbrella. Teshar decks are capable of quickly putting together game-ending combos, and the commander even shows up on the cEDH decklist database. KCI Teshar by Matteus Nogueira of cEDH Brasil is the deck I play in competitive pods. While the average decklist doesn't sound quite like the cEDH deck, it's definitely a 'greatest hits' album for Teshar.

Unless you've seen it in action or heard it through the grapevine, Teshar's average deck might look like a mess of low-impact artifacts and weenie creatures, but it's all highly synergistic, and with 43 historic spells and multiple redundant combo pieces, this is a hard deck to keep down. A typical combo with Teshar looks something like this: a sacrifice outlet, such as Krark-Clan Ironworks, a recursion piece, like Myr Retriever, and a zero-cost artifact, like, say, Walking Ballista. With the cards mentioned, you can sacrifice the Myr Retriever to the Ironworks for two mana, then cast the Ballista for zero, which will trigger Teshar to get back the Retriever, which gets the Ballista back when it dies. This generates infinite colorless mana, which you can use to cast the Walking Ballista and shoot down all your opponents.

This is just one variation on the numerous combos in the deck. Other combos are possible using other sacrifice outlets, like Altar of Dementia, Blasting Station, or Arcbound Ravager. There's also redundancy in the "retriever" cards, with cards like Scrap Trawler, Salvager of Ruin, and Junk Diver. Even if you haven't found a combo, these loops can be used to generate incredible value. Cathar Commando can sacrifice itself, and as long as you have a historic spell to cast, your opponents won't really get a hold on their artifacts or enchantments. Because it's so easy to get back cheap artifacts in this deck, normally innocuous cards, like Skyscanner, Conjurer's Bauble, and Chromatic Sphere, can become powerful card draw engines, and because Teshar is so good at accessing the graveyard, mill artifacts, like Grinding Station and Codex Shredder, can functionally act as card draw.

While it lacks the unconditional tutors you can find in black decks, this deck can do a lot with the options available to it. Enlightened Tutor is clearly the best tutor in this deck, but the recently printed Oswald Fiddlebender serves as a sacrifice outlet and a tutor as well. Ranger-Captain of Eos can find a zero-cost creature to start a combo loop and keep opponents from countering anything, and Moonsilver Key can find that Ashnod's Altar since it's an artifact with a mana ability. Hopefully by now you're convinced Teshar is worthy of Power Sink, so it's time to move on up to how we're brewing it differently.

On January 10th, 2022, CAG member and host of the Casual Magic podcast Shivam Bhatt put out a challenge on Twitter to build a Commander deck using only cards from the Modern format. I, among others, was inspired to brew with this challenge, and it even became the January deckbuilding contest on Archidekt. As it turns out, using the Modern card pool doesn't change a whole lot from the average deck. Only 14 cards from the average list would be cut, and while the loss of Ashnod's Altar and Skullclamp is painful, it's not enough of a change to be article-worthy.

Thus, we'll be keeping the Modern restriction, but we're also putting Teshar at the head of a popular Modern strategy: Soul Sisters. This strategy is named after the cards Soul Warden and Soul's Attendant, and it seeks to benefit from the lifegain triggers provided by them. Teshar brings some resilience to the strategy as well as a way to get even more lifegain triggers from creatures entering the battlefield. Let's take a look at the list below.

Living for the City

As expected, Soul Warden and Soul's Attendant make an appearance, but since we're playing a lot of artifacts and sacrificing creatures all the time, Leonin Elder and Daxos, Blessed by the Sun are going to do a ton of work for us. Righteous Valkyrie provides a nice anthem if we can get far enough over our starting life total, and it's going to gain a bunch of life with as many Clerics and Angels the deck can produce. Martyr of Sands is another shoutout to the Modern strategy: revealing cards from hand isn't the greatest proposition, but the Martyr sacrifices itself, which means it's possible to gain a lot over the course of the game as we recur it with Teshar.

We're even gaining life from our mana rocks. Pristine Talisman is an easy way to trigger effects off of lifegain, and The Celestus can be activated to gain a life on top of looting, which can be very powerful in this deck.

Lifegain on its own isn't going to win us any Commander games, so we need some ways to weaponize it. Test of Endurance and Felidar Sovereign are certainly valid ways to take a game, but it's not the kind of experience we're going for here. Instead, we'll be making a token army from our lifegain triggers with things like Griffin Aerie, Speaker of the Heavens, and The Book of Exalted Deeds. Most of these effects create fliers, so we can soar over our opponents' creatures.

To make sure our creatures pack a punch, we have Nykthos Paragon, and we're splurging on Archangel of Thune and Heliod, Sun-Crowned. While we're focused on getting a lot of small lifegain triggers over large lifegains, the Paragon triggers every turn, and even one counter on each creature isn't bad. Finally, we're using Aetherflux Reservoir, and while some players may not like it, sometimes combat's not strong and we need another wincon to lean on. Besides, this one is a historic spell for our commander, and this deck is pretty good at getting back its artifacts.

Now that we've covered the lifegain and win conditions, it's time to talk about the engine that keeps this train rolling. We're using Teshar staples Myr Retriever, Workshop Assistant, and Scrap Trawler alongside sacrifice outlets to get back small self-sacrificing artifacts, which in turn trigger our commander to bring back our retrievers. We also have Restoration Specialist so our enchantments aren't left behind. This not only sets off our Soul Sisters, but it allows us to mine the effects of artifacts repeatedly for tremendous value. Potion of Healing and Implement of Improvement can draw a bunch of cards, and Wayfarer's Bauble and Burnished Hart can become a crazy ramp engine.

Of course, this speaks nothing to the value we're getting from our sacrifice outlets. Because the commander is so good at reaching into the graveyard, milling with Altar of Dementia is almost card draw for us, and since our creatures can potentially get huge, it's not out of the question for us to win by milling opponents. With so many artifact creatures, Trading Post is particularly useful here, as we can sacrifice said creatures to draw cards or return artifacts to our hand. We can even use it to discard a reanimation target and gain four life for the privilege.

With all the creature death happening with this deck, we might get jealous of black and its numerous Blood Artist effects. Thankfully, Teshar is a Cleric, so Relic Vial also drains our opponents when our creatures die as well as being a single-use sac outlet. Finally, Oswald Fiddlebender can sacrifice an artifact and let us go higher and higher for artifacts on our curve. We may top out with Alhammarret's Archive in this deck, but that's a phenomenal card to put on the table.

Stop! In the Name of Love

That's the deck in a nutshell. Teshar ranks among my favorite legendary creatures in the game, and it was fun to work with a commander where I actually play the scary version of the deck for once. While I like the deck I brewed, using only Modern-legal cards didn't feel like the kind of restriction that made me need to flex my creativity. With nearly twenty years' worth of cards, at this point it may be a better restriction to do a premodern deck.

Perhaps something for another article? It's about time to wrap this up, I'd love to hear what you think of the deck or if there are any other commanders you want to see on Power Sink. Reach out, on Twitter or in the comments, I'll be there.