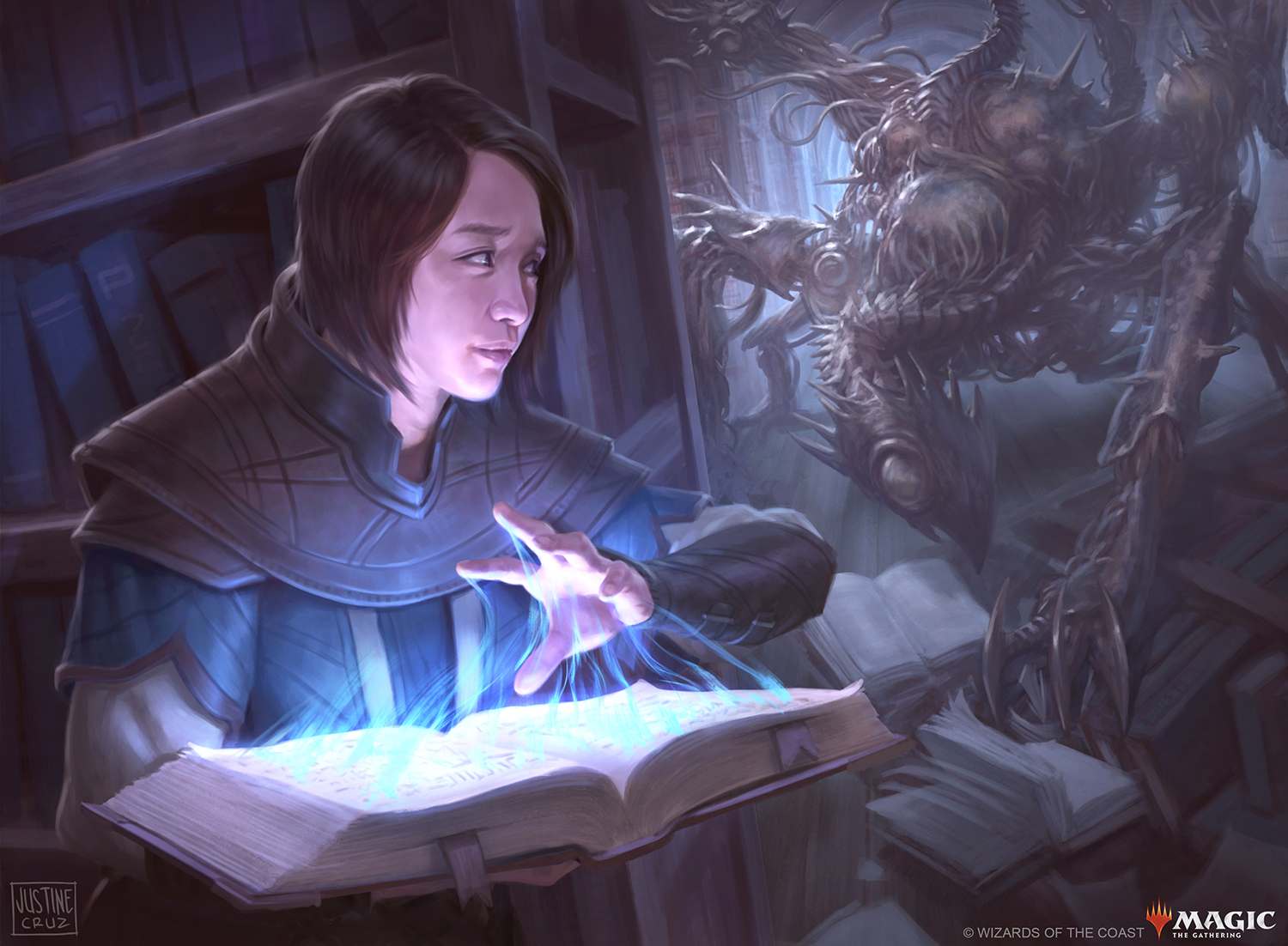 Whether you're new to playing Commander or you're a seasoned veteran, you'll certainly notice that cards are getting released at a breakneck pace. While we're never short of new splashy cards to bring to the table, this also means some cards can slip through the cracks.

Hi, my name is Joshua, and welcome to the first installment of Preview Review, where I'll dive back through recent sets for cards you might have missed, and give them an evaluation now that they've had some breathing room. It's time to chat about some of the lesser-played, choice cards from our eternal release cycle. Let's shine a light on some cards that have been performing at my table and maybe see if they can perform at yours!

For the first article, we're looking at some Auras, because there've been a bunch of awesome ones printed recently. These are light on mana and on your wallet, at least at time of writing. 2022 brought us a variety of useful Auras in each color, so let's explore these cards you might have missed.

Starting with white, Chains of Custody is a two-for-one Aura that can take up either a removal slot in your deck or a protection slot. It's also one of the more recently-printed cards on our list; Chains of Custody is only weeks old, making its debut in Jumpstart 2022.

Ward is a sneaky powerful keyword. Commander tables all groan in unison whenever Smothering Tithe, Mystic Remora, or Rhystic Study hit the table, because we're greedy, and we don't like spending our mana when we don't get to see the value in it. While ward is a more minor version of those taxation effects, the feeling of being taxed at all is a big deterrent for a lot of players; five mana for a Beast Within starts to feel pretty bad, y'know? Enchant your commander with Chains of Custody, then target a huge threat of one of your opponents. While that player won't appreciate having their stuff removed, your other opponents will think twice about removing your commander.

It's also good to note that Chains of Custody, like many enchantment-based removal effects in white, targets a nonland permanent. The more flexible removal options in your deck, the better. If you're finding your feet upgrading your new preconstructed deck, cards like this are your key to being able to deal with whatever the table throws your way.

An especially good place to slot in Chains is in a Mazzy, Truesword Paladin deck. Their ability lets us recur Chains of Custody should it ever hit the graveyard. This means your target can change with the threats at the table, or you can keep a problematic permanent out of the game for as long as you need.

Moving into blue, let's put our heads together and do some Combat Research. For one blue mana, we've got another Aura that packs some utility.

The incremental advantage of drawing an extra card a turn is never a bad thing, especially on a one-mana Aura. You're going to want to put this on an early-game evasive creature and reap the benefits.

Where Combat Research provides a little extra utility over its cousin Curious Obsession is that second effect to give ward 1 and +1/+1 to the enchanted creature if it's legendary. As with Chains of Custody, taxing your opponents doesn't go unnoticed. It changes your opponents' plans on their turn because they need to factor in that extra cost when leaving mana open for interaction.

I like this card attached to a legendary creature that can come down early and wants to attack ASAP and as often as possible, and Balmor, Battlemage Captain has flying baked right in. Those incremental points of commander damage dealt by Balmor in the early game may even help you knock out a player in the later turns once Balmor and the team are buffed by your barrage of instants and sorceries.

Contrary to its title, Witness Protection didn't really fly under the radar, namely because one of the greatest things you can do in Commander is turn a game-ending threat into a Legitimate Businessperson instead.

If I had to name a go-to deck for this card, it's got to be Jacob Hauken, Inspector, if for no other reason than I'm trying to manifest a crime-themed deck into existence somewhere out there.

Black brings us tales from the Universes Beyond with one of my favorite underrated Auras of this year, Nurgle's Rot. Now, I'm a massive fan of the Warhammer 40K preconstructed Commander decks. They brought us some powerful, thematic decks that served as a welcome introduction to the grim dark worlds of Warhammer. Those precons have been out a short while, so it's nice to go back and look at some of the neater tools they brought to our regular decks.

Nurgle's Rot brings some sweet utility to the table. A recurrable one-mana enchantment that's already triggering your Enchantress effects can draw you extra cards when paired with cards like Hateful Eidolon. You also want to put this card in decks that can make use of that token-generation. Commanders like Xira, the Golden Sting can sacrifice your tokens for card draw, so more fodder never hurts. Statement commanders, like Toxrill, the Corrosive, can almost guarantee the death of at least one of your opponents' creatures within a full turn rotation. Getting a token for yourself into the bargain to sacrifice to Toxrill doesn't feel bad either (for you, of course).

My go-to pick for Nurgle's Rot is Tatsunari, Toad Rider. A one-mana excuse to bring Keimi to the party is never a bad thing. While Keimi can already only be blocked by creatures with flying or reach, Rot can certainly dissuade the opponent that could block from doing so. If they know you're getting your Nurgle's Rot to hand and a token, ready to recast Rot the second Keimi gets dispatched! Pretty rotten if you ask me.

I like Sticky Fingers for many of the same reasons I like Combat Research. Here the payoff is almost sweeter if you're an impulsive red mage rather than a calculating counterspell-casting blue mage. Attach this Aura to a one-drop creature on your second turn to turn that creature into valuable Treasure-generation. In the early game, it's very unlikely that your opponents will have too many creatures to threaten a double block. This allows you to steadily ramp in those crucial turns. I wouldn't expect this creature to stick around, but when the creature does die, you get to draw a card to replace the Sticky Fingers you just cast. If the creature doesn't die and can't push that damage through as the game progresses, just wait for a board wipe and draw that card you totally forgot you had access to.

One thing that hasn't been lost on anyone building decks last year since the launch of Kamigawa: Neon Dynasty is that Channel is a wonderful mechanic. The cycle of Channel lands sits among the most-played cards from the set. Careful Cultivation is on this list because the Channel ability is sneaky and powerful. Its instant speed means you get to hold up a token at any time, in case you need a surprise blocker, and that token can be used to tap for mana on your next turn if you play it on your opponent's end step. It's best used when you've either got a creature you don't mind tapping down for a mana boost or you get to hold up two mana for a flash Llanowar Elves in the early game.

My go-to deck for this card is a little different, and that's due to its synergy with those crazy Companions from Ikoria. Keruga, the Macrosage allows you to draw a bunch of cards when it enters the battlefield, with the restriction of cutting every card that costs less than three mana from the build pile. Decks with a Keruga Companion are always on the lookout for more ways to cheat that restriction and play two-mana effects on three-mana cards. If cards like Careful Cultivation keep getting printed, we'll see these decks flourish a little more. That does a lot for a format that can end up a little homogeneous at times, although if your playgroup doesn't run Companions, then this card is a welcome addition in classic enchantress-adjacent builds, like Chishiro, the Shattered Blade.

Finally we come to Audacity, one of the most straightforward cards on this list. If you look from a distance, it looks a lot like Rancor, the key difference being that Rancor always returns to hand once it's put into the graveyard, allowing you to recast it repeatedly. When Audacity hits the graveyard, it draws you a card instead. Now, I'm not telling you to replace Rancor in all your decks. It's a great card. One mana for repeatable +2/+0 and trample is amazing, with all the ETBs that come with it. But is Audacity worth running as well? If your strategy relies on dealing combat damage to your opponent, then yeah, a little redundancy can go a long way.

My go-to deck for Audacity, is Stangg, Echo Warrior. Stangg makes the difference between Audacity and Rancor look a little slim. That repeatable card draw from sacrificing your Stangg Twin and everything that's attached to them is too sweet to pass up.

And that's a wrap! These are some wonderful Auras you might have missed from last year. Do you run them in your decks? Agree or disagree with me on these picks? Let me know in the comments, or you can chat Magic with me on Twitter @PrinceofBielTan

See you in the next one!

Joshua is a Medical Researcher from the UK. He's played Magic since Dragons of Tarkir and loves all things Commander, the more colours the better! When not playing Commander, he can be found insisting Jund is still a viable deck in Modern and painting tiny plastic miniatures on Twitter @PrinceofBielTan